As the ship prepared to dock in New Orleans, damage to one of the lower decks was visible at the back of the ship. 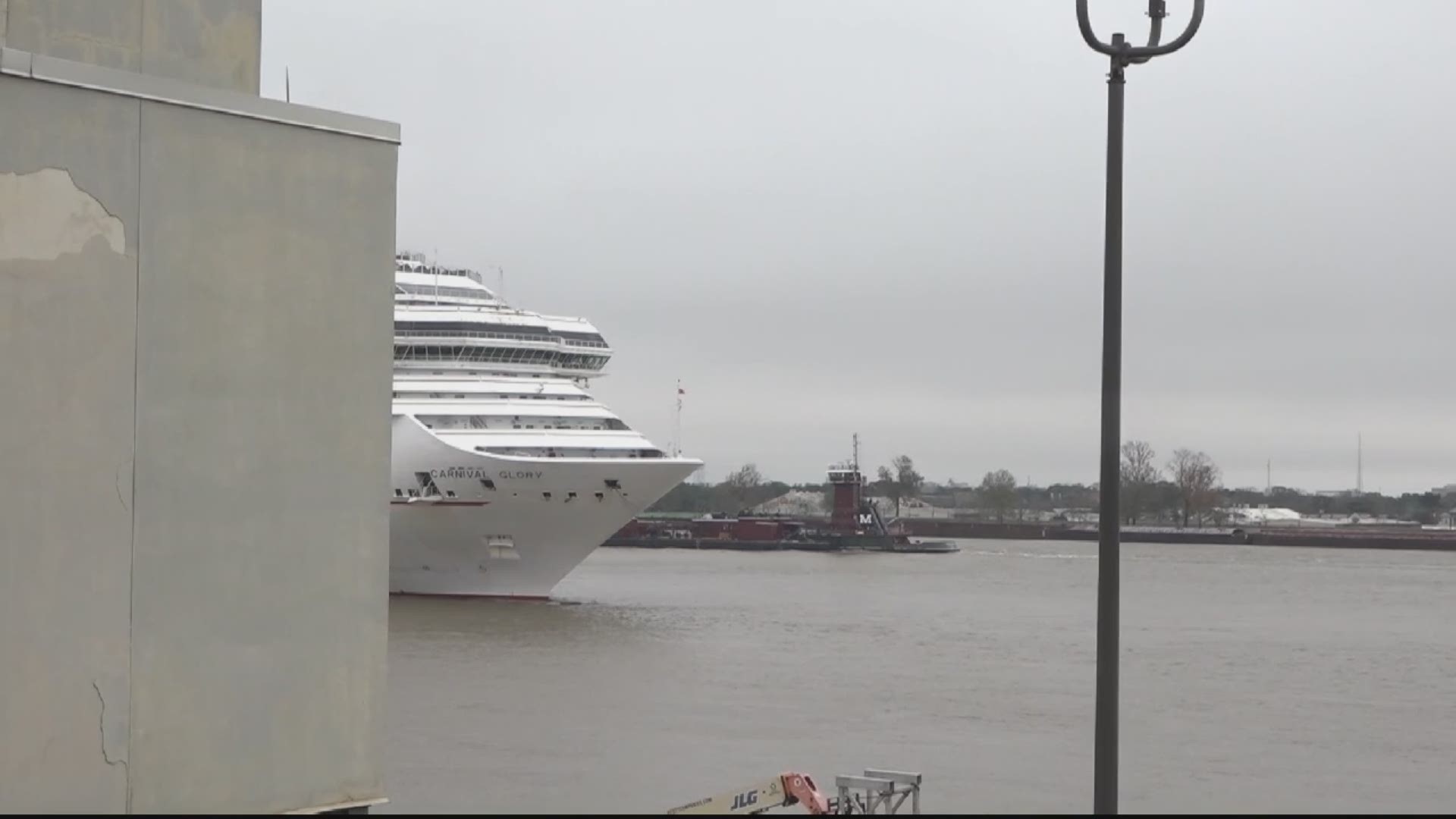 NEW ORLEANS — The Carnival Glory is still at port in New Orleans Monday morning, more than 12 hours after it was originally scheduled to depart despite damage from a collision with another ship in Mexico.

It was scheduled to arrive at 6 a.m. and depart at 4 p.m., but didn't get to New Orleans until around 8:30 a.m. Carnival pushed back the ship's departure time to midnight because crews were working to repair damage to the back of the boat.

But the ship was still in port Monday morning, with no indication of when it would leave.

As the ship prepared to dock in New Orleans Sunday, damage to one of the lower decks was visible at the back of the ship. Exposed wall paneling and a crumpled deck appeared to be the most extreme problems visible from onshore.

Carnival officials later confirmed the damage was to the aft dining room.

Shortly after the ship docked, Carnival released a statement thanking passengers for their patience. The company said they would be delaying the ship's planned Sunday afternoon departure for repair work.

"Today’s departure will be delayed for a few hours as workers complete some temporary repairs to Carnival Glory’s aft dining room," the statement read.
All other systems and features of the ship are operating normally. On today’s departure and some future sailings some adjustments to dining room seating reservations may be necessary until final repairs can be completed."

Carnival Cruise Line is still assessing the damage to the Carnival Glory and the Carnival Legend, which returned home to port in Tampa Sunday morning.

In a letter to passengers, Carnival Captain Pero Grubjesic said, "a formal investigation is underway to confirm the cause of the accident, which we believe was due to spontaneous wind gusts and strong currents."

According to the company, the Carnival Glory was maneuvering to dock when it collided with the Carnival Legend, which was already alongside.

"We are assessing the damage but there are no issues that impact the seaworthiness of either ship. We have advised guests from both ships to enjoy their day ashore in Cozumel," Carnival's statement said.

Videos taken by passengers on-board multiple ships in the area showed the Carnival Glory crashing into the Carnival Legend as it maneuvered to dock.

Six passengers aboard the Carnival Glory reported to the ship's medical center with minor injuries. None were airlifted from the boat.

Guests on the ship were given a $100 credit to compensate them for the problems. A company official said passengers who were in the dining room when the boat crashed and injured passengers received additional compensation.

Carnival said one guest was injured while evacuating from the dining room, but did not specify the type of injuries reported.

Both ships were finishing 7-day Western Caribbean cruises when they crashed.

RELATED: Boeing’s Starliner back on Earth after historic mission