Krewe of Red Beans is responsible for the stenciled signs warning drivers to watch for bikes and pedestrians. 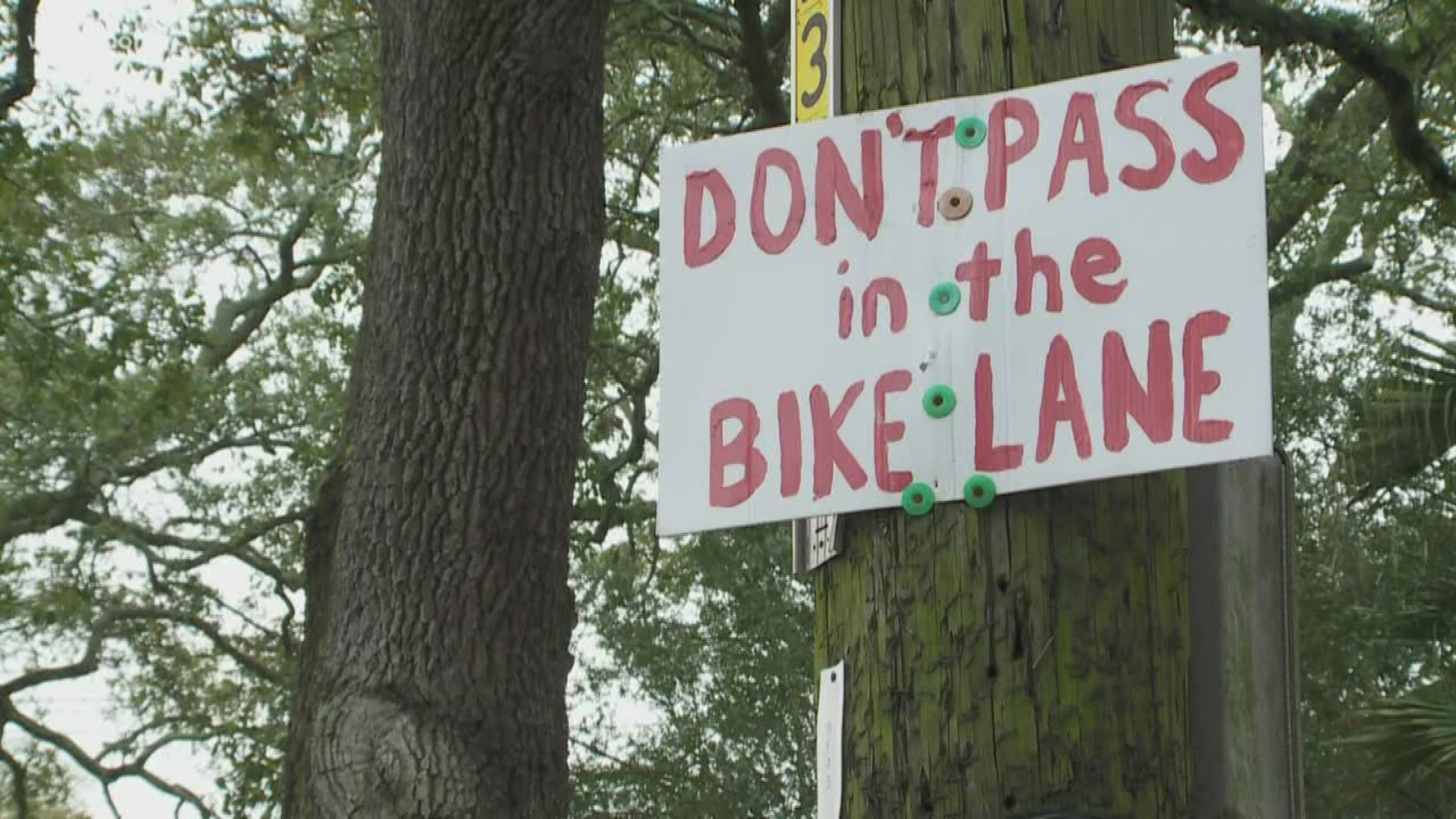 NEW ORLEANS — Homemade signs catch your eye as you travel down Esplanade Avenue near Bayou St. John in New Orleans.

This is where drunk driver Tashonty Toney slammed his Chevrolet Camaro into a group cyclists after the Endymion parade, last march.

"Last year our krewe lost a member killed by a drunk driver," Devin de Wulf from the Krewe of Red Beans said. "Sharee was a friend of mine. It was definitely a senseless tragedy, that doesn't need to happen."

Krewe of Red Beans is responsible for the stenciled signs warning drivers to watch for bikes and pedestrians.

"It's definitely tough when you think about the anniversary coming up," de Wulf said. "I think there's no reason why we can't do a better job."

April Leigh said one with the message "Driving Ruins Mardi Gras" is meant to start a conversation.

Mirro Rakic, an avid cyclist from Buffalo, New York said the signs are a good reminder of what can happen.

"It's worth sort of stating your case that it is a shared road," Rakic said. "We all should be able to enjoy it."

The deadly accident had a profound impact on bikers and the New Orleans community.

"It just could have been anyone and the way it happened was yes he was drunk, but he was also aggressive in trying to go around someone in a bike lane that was not protected," Leigh said.

While the NOPD does not publicly discuss specific personnel deployment or strategic tactics, we can say that the department will be at full staffing throughout the upcoming Mardi Gras weekend, including the Endymion parade. This includes having NOPD officers and representatives from our law enforcement partners assisting with patrolling in and around all Mardi Gras parade routes, including the traditional parade routes.

NOPD officers will also be highly visible in DWI enforcement throughout this Mardi Gras season throughout the city. As an example of this, through February 27, the NOPD is taking part in the National Highway Traffic Safety Commission's "Drive Sober or Get Pulled Over" enforcement campaign, which helps NOPD to staff additional officers to focus on DWI patrol and enforcement.

The NOPD believes that, along with law enforcement, all revelers practicing personal responsibility is vital to ensuring a safe and happy Mardi Gras. Whether driving a motor vehicle, walking, riding a bicycle or using other means of non-motorized transport, we ask citizens and visitors partaking in Mardi Gras events to remain vigilant of their surroundings at all times and to travel safely to and from events. There are multiple alternatives to operating a vehicle while impaired - assigning a designated driver, carpooling, ride share, taxi, public transit, etc. Utilizing these alternatives can help keep yourself and others safe.

We wish everyone a safe and happy Mardi Gras.