'Even tougher for seniors,' Seniors forced to find a place to live after Ida damaged their home

With storm damage and operating solely off a generator, the facility tried evacuating residents to properties out of state 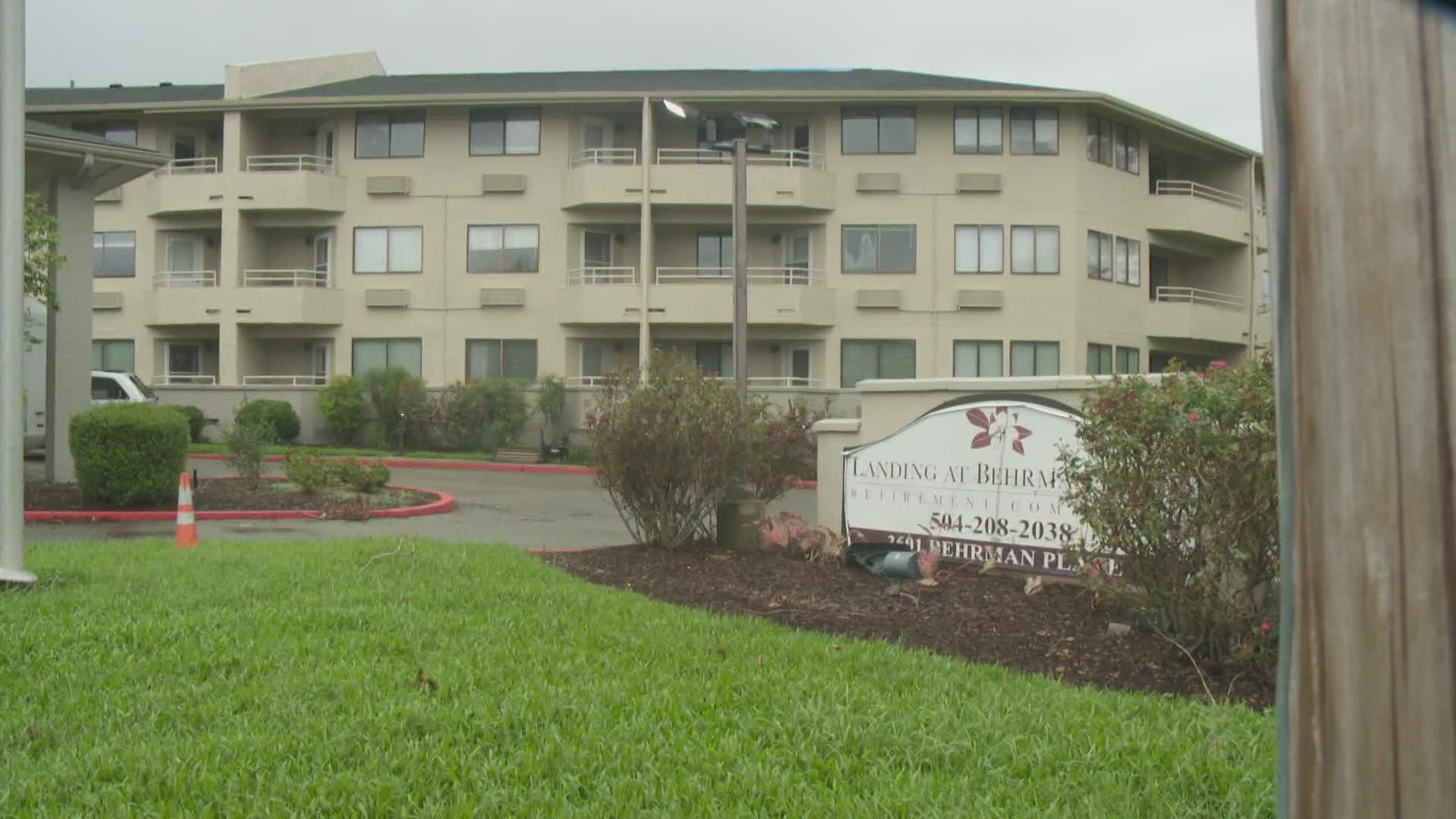 NEW ORLEANS — Matthew Blake’s mother law moved into her New Orleans retirement community on the West Bank at the beginning of August. Less than a month later, she was homeless.

“She’s a little bit upset but I feel like overall she’s handling it pretty well for what she’s had to go through,” said Blake.

His 84-year-old mother-in-law lived at The Landing at Behrman Place. It’s also where she weathered Hurricane Ida. With storm damage and operating solely off a generator, the facility tried evacuating residents to properties out of state, but Blake said the evacuation bus broke down.

“They were stuck on the highway for like three hours in the heat,” said Blake.

Blake said a school bus eventually picked them up and brought them back to Behrman Place where residents had to decide whether to take another bus out of state or find somewhere locally on their own.

“It would be especially tough for anyone and I’m sure it’s even tougher for seniors,” said Blake.

He soon realized his mother-in-law can’t go back home. A social media post days after the storm urged residents to find another place to live. A statement on the facility’s website notes extensive damage, saying “repairs are projected to take many months or quite possibly a number of years if repairs are at all possible.”

That leaves residents with no direction on where to call home although the facility is recommending other places, mostly out of state.

“People have all their belongings there and everything,” said Blake. “That was their home.”

The property’s director told Eyewitness News major problems are mold and holes in the ceilings, then referred us to the management company, Sunshine Retirement Living.  The company released the following statement to Eyewitness News.

“For nearly 30 years, The Landing at Behrman Place has been a safe, nurturing and welcoming home for seniors in Orleans Parish, where the health, safety and wellbeing of our residents have always taken top priority.

On August 29, the community suffered serious physical damage due to Hurricane Ida. Fortunately, all residents were successfully evacuated and there were no injuries or loss of life to any of our residents or team members. We are in the process of assessing the extent of the physical damage, but current projections are that the repairs will take many months or even years, if at all possible.

Our dedicated team stayed in the community during the extent of the hurricane and afterward to ensure the safety of our residents while also providing constant updates to both the residents and their families. Our team also immediately hired a security company to protect residents’ belongings and are working very closely with residents so they can safely retrieve them.

Since we can no longer safely house and take care of our residents at the community due to factors completely outside of our control, we were forced to end their leases and no rents were collected in September. Our team is also actively providing referrals to trustworthy senior communities nearby including three sisters, independent living communities in Texas and Georgia.

We are all devastated that Hurricane Ida proved disastrous to our community in New Orleans, and we will continue to support our residents as they navigate through its aftermath”

Blake said he and his family have felt left in the dark through the entire process.

“I feel bad for my mother-in-law. I feel bad for all the other residents there,” said Blake. “I feel like you would have been treated better if you were at an overnight motel”

Blake says he’s thankful his mother-in-law had a place to go as they try to figure out what’s next.

The management company says it is working with residents to remove all their belongings from the building.

RELATED: Animal shelter filled with pets after families struggle to keep them after Ida