He said it was his job to show them that beauty. Now the Metcalfs were about to see the beauty around them through the people at St. Vincent de Paul. 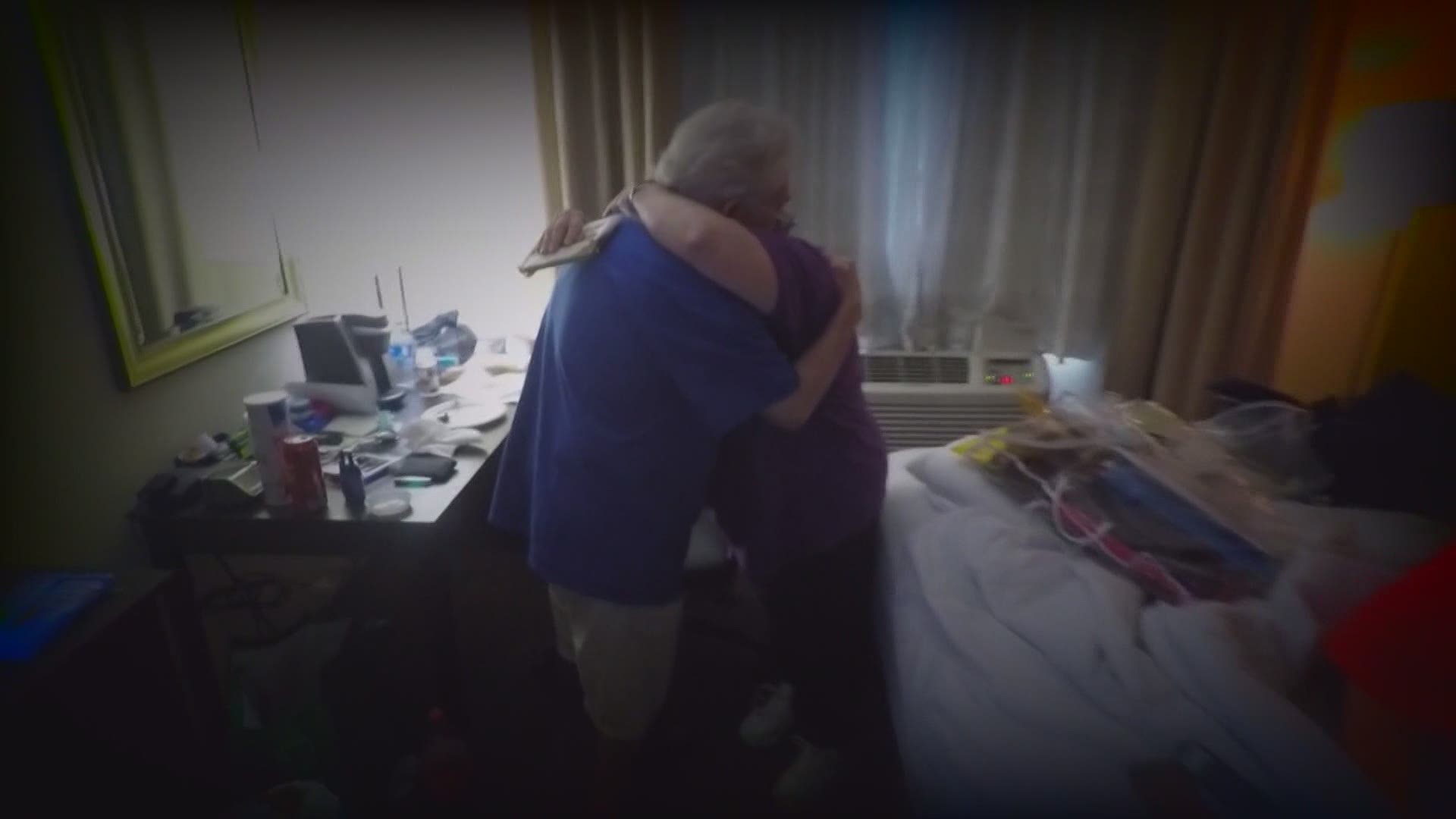 NEW ORLEANS — The pandemic brought financial struggles to families that had never gone through that situation before.

Recently, an organization that helps people in times of need, called our newsroom to say the family of a former WWL-TV newscaster had fallen on very difficult times.

Here at Channel 4, we're a family too, so we wanted to see what the family was going through.

“Good evening a welcome to a Sunday Journal. Pleased to begin,” said Jim Metcalf on one of his broadcasts from the 1970s.

It’s a familiar greeting to Channel 4 viewers of the 70s. The late Jim Metcalf was an artist who painted with words. To this day, the top Press Club of New Orleans TV journalism award for writing bears his name.

“Already the stone and steel of your towers rise above the bank of your river, and hold back the sunlight from the streets below,” wrote Metcalf about the growth of the New Orleans downtown area.

And he covered stories that changed our lives forever.

“Newsman Jim Metcalf and cameraman Jim Embry left for the (Mississippi) Gulf Coast hours before the hurricane howled into being. Tonight they are still there. They are safe, but they are marooned,” the late WWL-TV News anchor Bill Elder said on air in the aftermath of Hurricane Camille in 1969.

“It will be weeks, possibly months, before the complete toll in lives and property of this storm is known. This is Jim Metcalf in Biloxi,” he reports from the hurricane’s destruction.

Brother and sister, children of Jim Metcalf hug and cry in a small hotel room.

Before his death from cancer in 1977, he could have never imagined this report, where his grown children and wife Mary Ann were homeless.

“My mother has been there for 45 years, and it's not very much fun being thrown out of your house,” said son Marc Metcalf.

“When we left, my mom's TV was still on in her room,” said daughter Clare Metcalf.

Several months ago, two of his children, Marc and Clare in their 60s, Clare's partner and their 96-year-old mother, who is incapacitated from a stroke, lost the family home. Marc who has Parkinson’s Disease, and Clare and her partner, had moved into the family home to care for their mom.  It was paid for, but a company was able to buy it in a tax sale. Clare said she was overwhelmed and confused over the back taxes they owed. After a long legal and costly process, she asked the company could they buy the house back.

“I said, ‘Please tell me what to do and I would make an offer.’ And she says, ‘Uh, you know, I will,’” Clare said while crying.

Clare kisses her mother who is lying motionless in bed and tells her she loves her.

Getting the house back did not work out. They lost most of the furniture too. The four of them have been living in a hotel room. They managed to save boxes of the memorabilia from their father's TV and radio career in Texas.

There’s the letter from LBJ and Lady Bird Johnson, wishing him well when he left the station they owned and headed to WWL, and pictures and promotional items from the old Channel 4 days on set with Hap Glaudi and Don Westbrook. There’s three-quarter-inch tape cassettes of his Sunday Journal show, awards such as the Peabody, and pictures of his WWII service where he was a gunner they called Buzzy.

“He was a wonderful man. He saw a lot of tragedy. He saw World War II. He was in five theaters in WWII. He stormed the beach of Normandy. He came back damaged to an extent, and it always stayed in his heart,” said Marc.

They think that is where his soulful writing came from. He wanted people to look past complaining about what goes wrong in life, and look at the beauty around them. He said it was his job to show them that beauty. Now the Metcalfs were about to see the beauty around them through the people at St. Vincent de Paul.

“He said, ‘Let me take some of this off of you. Those words were unbelievable,” said Clare about what Christopher Gross, the CEO of St. Vincent de Paul, told her.

“He gave so much to this city, now this is the time for the city to give back to his family,” said Gross.

“The severity of the cases have been worse this year because of the pandemic and the hurricane,” said Gross.

They worked with the hotel to donate the room for the Metcalfs. They have been collecting household goods to replace them. And then this week, finally some good news.

St. Vincent de Paul found a rental for the Metcalfs. They will continue to assist and help them to budget their social security so they can be on their own.

Jim Metcalf wrote an essay called “Crossroad.” He wrote, “You will take your road and walk away and think ahead and I’ll be here at the crossroad until you disappear over the horizon.”

It's about a child coming of age and leaving the nest, and a parent's promise to always be there as a safety net to catch him when he falls.

Right now, St. Vincent de Paul is a safety net for nearly 600 local families. And they are fulfilling the promise Jim had for his.

Because of the pandemic, some regular donors were unable to contribute in the past year.

Click here to donate or find out about services.

RELATED: 'End of the era' | Demolition begins at McDonogh 11