Firefighters could remain on the scene for an additional 24 to 48 hours, the fire chief said Wednesday evening. 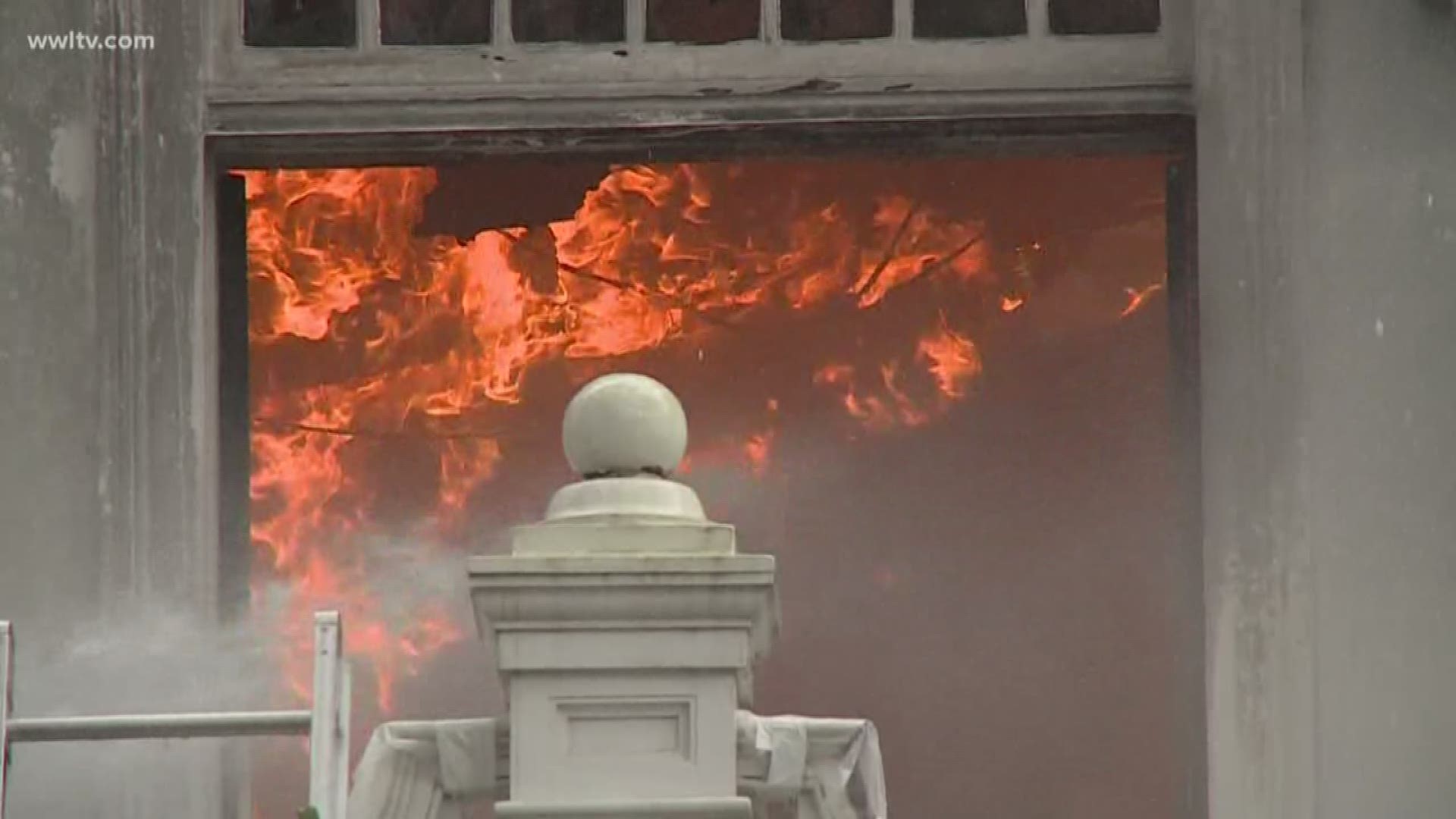 The fire was reported at 7:44 a.m. at a three-story Victorian-style mansion at 2525 St. Charles Avenue. Christopher Montgomery told the New Orleans Advocate that his brother-in-law, sister, and their 92-year-old mother got out safely after the fire broke out Wednesday.

New Orleans Fire Department Superintendent Timothy McConnell said the damage to the mansion that has been in the same family for more than 100 years was "catastrophic." 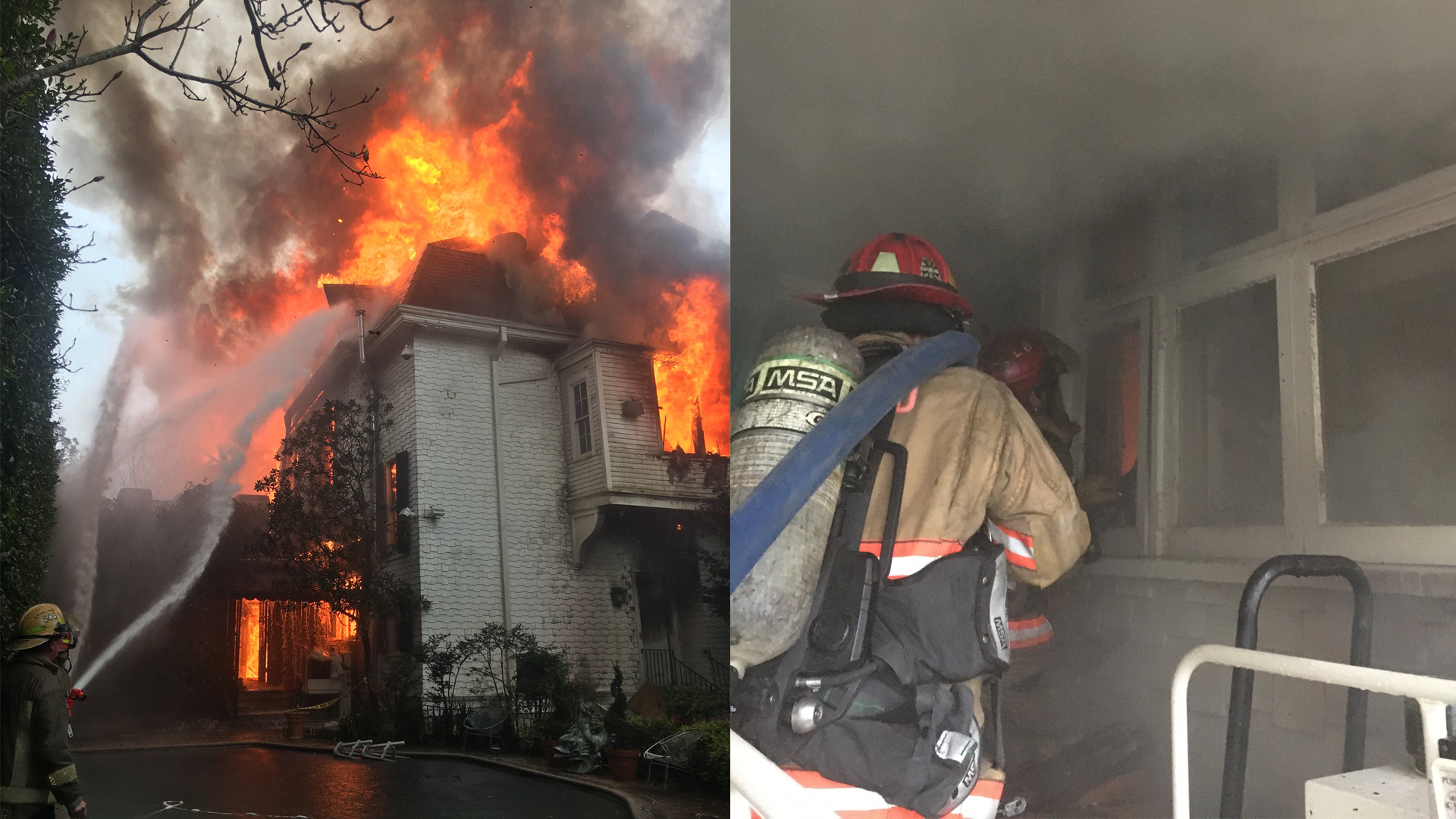 "To use an analogy, this was like a football game and we were down 40-0 when we got here before our offense hit the field," said McConnell.

McConnell said it is believed the fire started in the basement, but the cause will not be known until a full investigation has been completed. He said the fire likely funneled up through the middle of the house, up several floors and eventually to the roof. McConnell said the structure of the home is considered a "Balloon-frame construction."

"So hallow walls, a fire can extend very easily from floor to floor because of what it doesn't have what we use today, in modern construction, are fire stops," McConnell said.

As of 1:45 p.m the fire was brought under control. McConnell says he anticipates crews will be on scene for the next 24 to 48 hours putting out hotspots.

"Unfortunately, it is a catastrophic loss," McConnell said. "Our heart goes out to this family."

Nearby buildings were evacuated as the fire intensified, burning a hole through the mansion's roof and surrounding tree canopies.

One firefighter was rescued from the building after he became disoriented. Paramedics evaluated him at the scene and returned to his company. Another firefighter stepped through the floorboards but was able to get out of the home uninjured.

"At that point, we pulled everybody out, that was almost an hour into the fire. And at some you make a call and it was just that time," McConnell said.

He said once the crews complete putting out hotspots and minimizing the potential for parts of the structure to collapse, investigators will go through the property to try to find an exact cause. 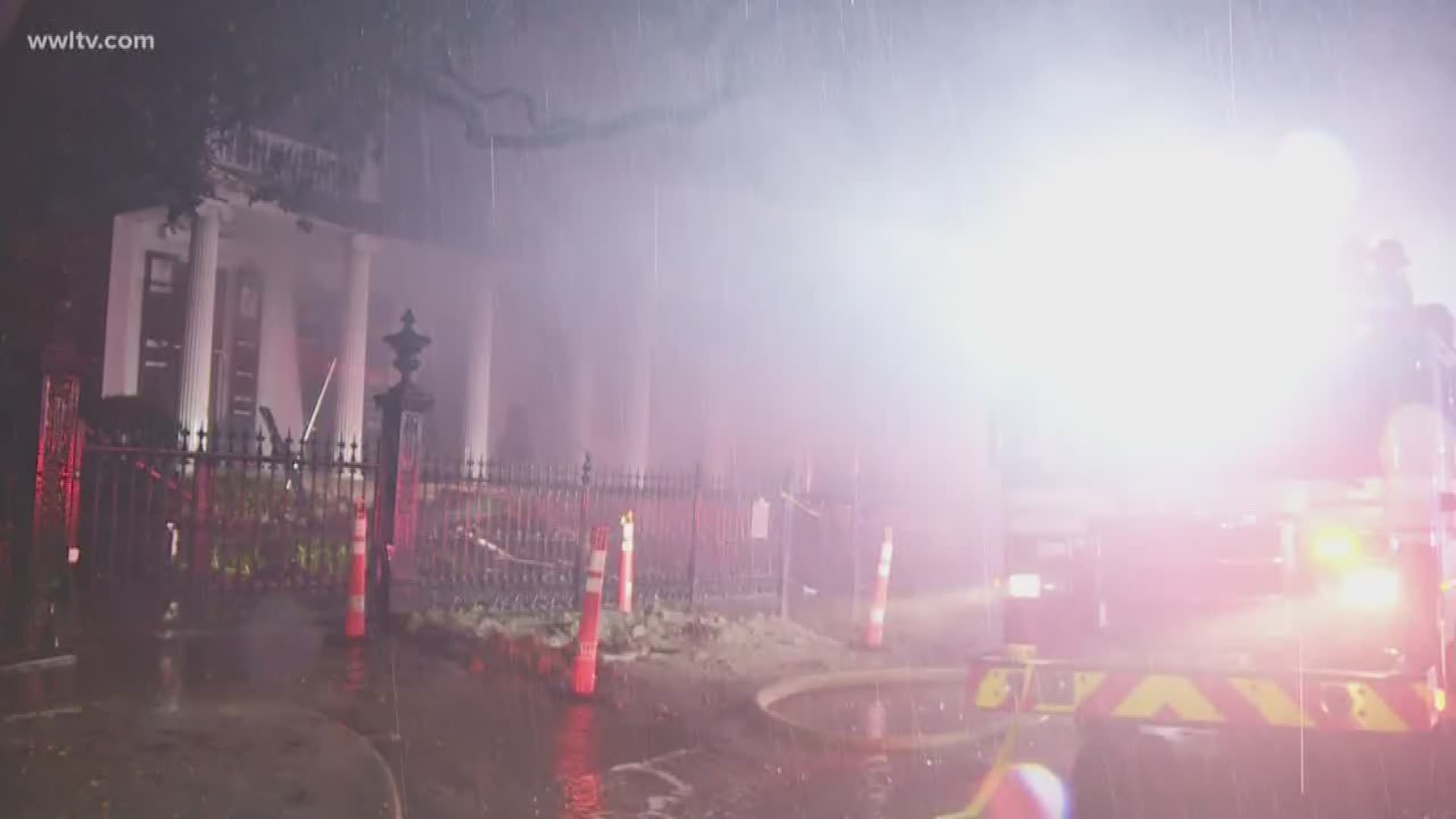 Firefighters noticed heavy yellow smoke coming from the building's basement, indicating that there was the possibility of chlorine being involved. The homeowner said that chlorine and other pool products were stored in the basement, confirming firefighter's observations.

The fire caused heavy black smoke to rise over New Orleans. Flames could be seen for miles. The smoke was so thick and went so far that it set off the fire alarm at City Hall, causing it to be evacuated for a short time, according to WWL-TV reporter Meghan Kee.

The fire department shared photos from the scene showing firefighters battling a large column of flames coming from the building's roof.

A historic piece of New Orleans

The building is the family home of the Montgomery & Grace families that dates back to the turn of the century and is one of the places with Rex, the King of Carnival, stops to toast on Mardi Gras.

"For a New Orleanian, this is one of the most historic houses," said former WWL-TV reporter Bill Capo. "The leader of the family told me, 'We will rebuild again.'"

We asked local civil engineer Fritz Gurtler for his take on the property and if the house can be restored.

“Looks like parts of the facade may be able to salvaged," said Gurtler. "Looking at what I am seeing there is not much left of the roof and a lot of the floor and other structural framing is probably going to be rebuilt from scratch.”

A family member told Eyewitness News' Danny Monteverde that they still plan to celebrate Mardi Gras Day near the home, if at all possible. Capo said the family was determined to do so, even if it meant setting up a card table. 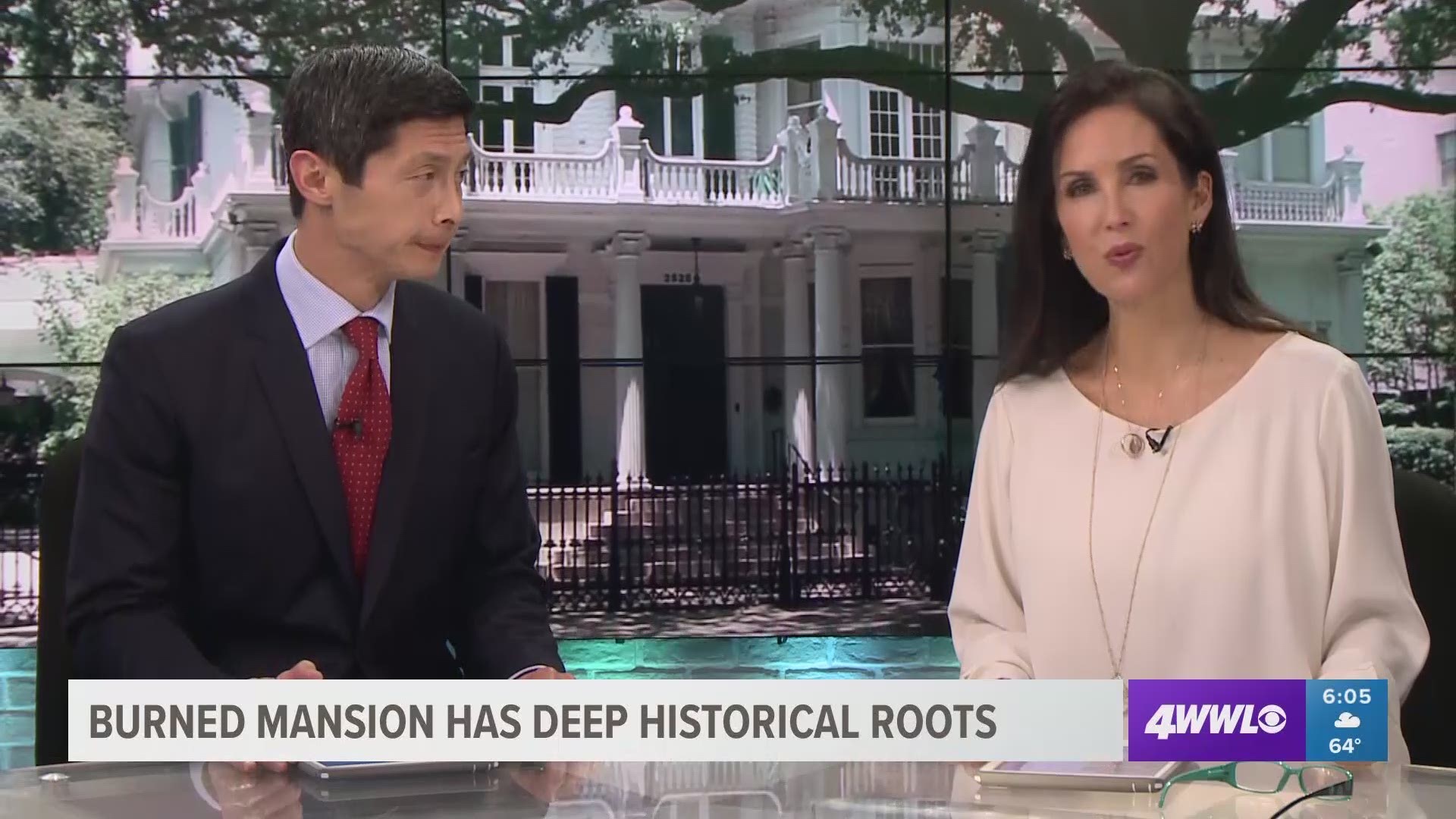 Six generations of the Downman-Kock-Montgomery-Grace family have lived in the home during the past 100 years. Robert Downman bought the home in 1906.

The house is believed to have been renovated and expanded in the 1880s from one built before 1865, according to the Preservation Resource Center of New Orleans.

Its occupants over the years included four kings and a queen of Rex, the most elaborate parade that rolls on Mardi Gras, according to a 2011 article in the PRC's magazine. It said the second owner's three sons all were kings of Rex, and the man who bought it in 1906 — a relative of Montgomery's — and one of his daughters were Rex monarchs in 1907 and 1915, respectively.

Since 1907, the procession has stopped at the house for a toast.

According to the Preservation Resource Center archive, the house was designed by architect Henry Howard and built prior to 1865. It was then renovated by architect Thomas Sully after 1888. 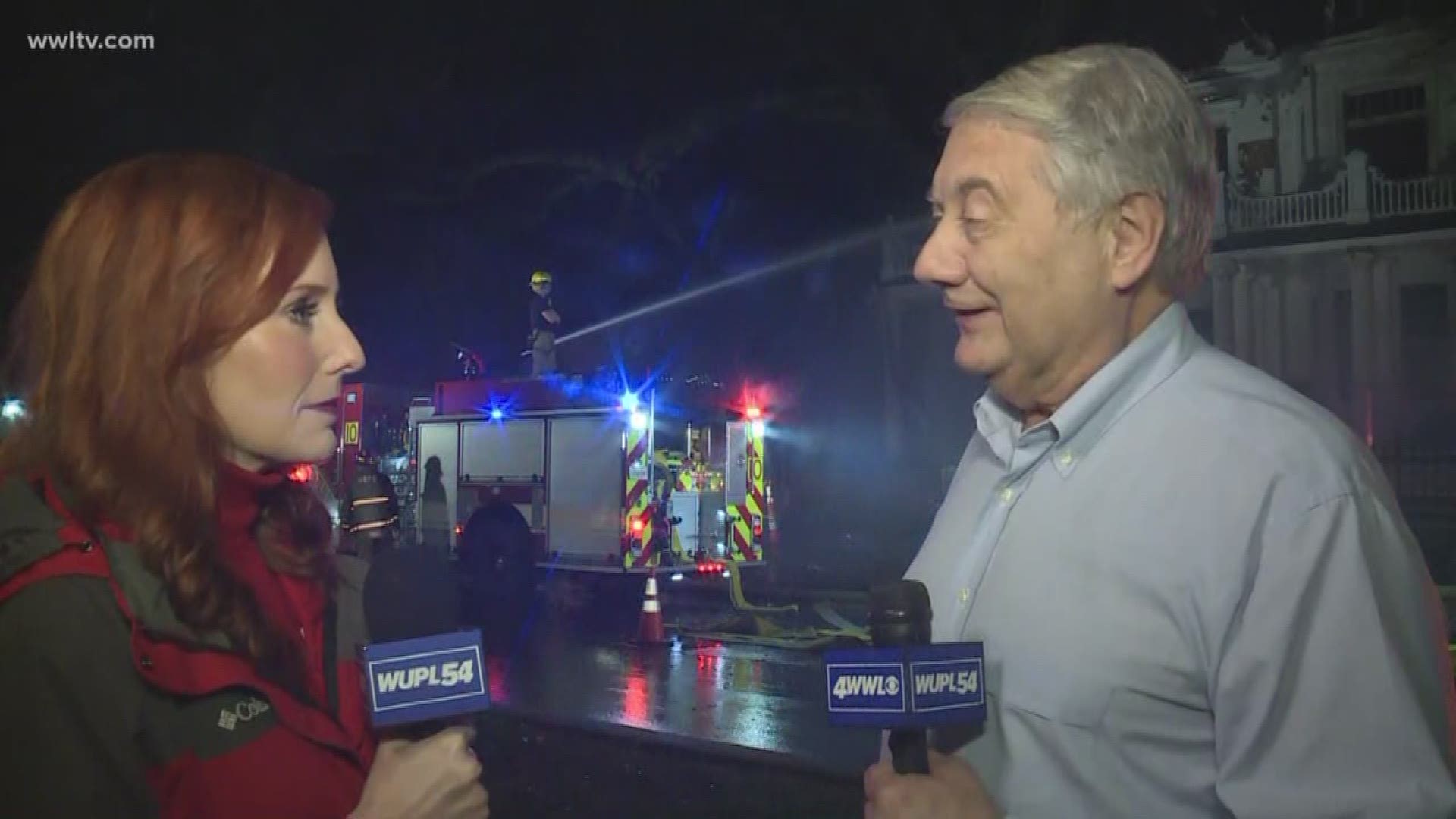