Shot in the head in the French Quarter, it took more than one miracle to save police officer's life

It's been three months since an NOPD officer was shot in the head in the French Quarter. He shares his story with Karen Swensen. 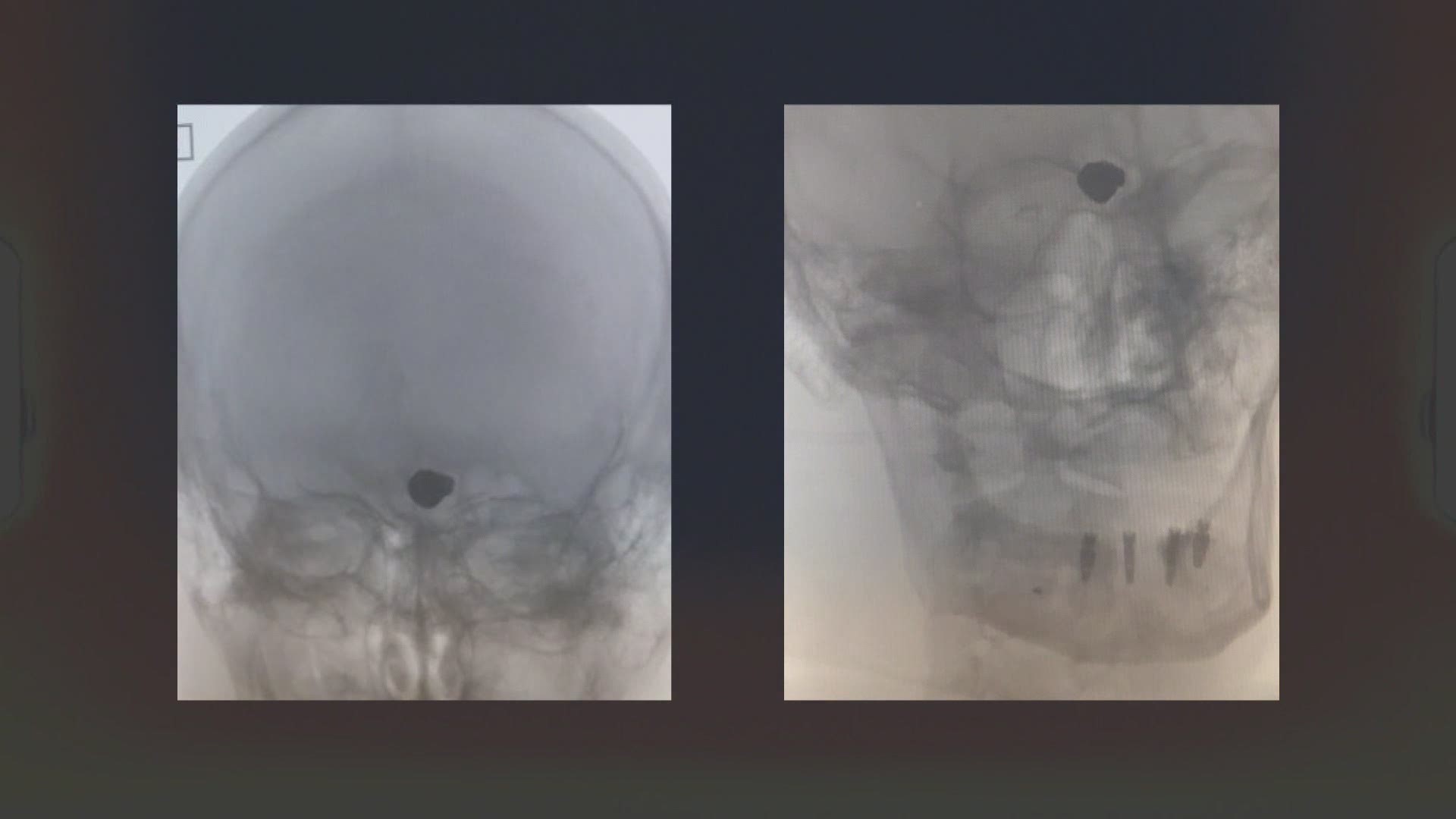 NEW ORLEANS — There are some life events so painful we wish we could forget.

“I thought he was gonna run up on me and finish me off on the ground,” NOPD Officer Trevor Abney recounts.

Not even the bullet lodged between his eyes and in the middle of his brain has fogged his memory.

With total recall, he remembers everything from the moments leading up the ambush to lying in his hospital bed, aware of what was happening around him but powerless to communicate.

He showed us his journal. Officer Abney writes from the perspective of both a walking miracle and a walking time bomb.

With the bullet still lodged in his brain, Abney fights the fear of a deadly seizure or stroke by facing the fear that left him like this.

“Thinking about everything that happened to me on Oct. 30, 2020, at about 4:30 p.m.,” he writes. “I feel like I need to type what I remember. Just in case. I decided to roll down Royal Street and head to the station for a cup of coffee.”

Abney remembers the quiet, sunny day. He was partnered with Officer Brooke Duncan, a fellow war veteran-turned-cop and good friend.

“We worked together as often as they would let us,” he says.

The two drive down Royal Street stopping in front of CC’s Coffee and wave through a pedicab. Officer Abney doesn't see the passenger in the back locked and loaded, but the surveillance camera does and so do the innocent bystanders.

"He cocked one of these handguns that has one of these long clips in it,” a witness recounts. “And he started  firing into the cop car!”

“I looked back up and saw a round circle in the windshield dead center,” Abney remembers.

He knew immediately they were ambushed.

“I knew I was getting shot at from somewhere, but couldn't tell from where,” he said. “I thought the rounds were coming from one of those balconies.”

Abney was in the driver’s seat. He leaned to his right and right into the line of fire.

“I caught it in the left cheek and it went -- I went instantly blind.”

“I’m shot in the face!” Abney reads from his journal. “I couldn't even cuss like I wanted. The type of sounds I can't even describe in writing or recreate.”

Abney says, at the time, he thought the gunman was reloading.

“’Cause I figured if you're gonna ambush the police, you're not just gonna come with one magazine,” he said.

Abney and Duncan dove out of the car and tried to get behind it. It was then they locked eyes. Remember, Abney had just been shot below his.

“Duncan came around the corner and he looked at me and he had that shocked look on his face,” Abney said and then continued from his journal. “It felt like the whole left side of my face was hanging off or gone. I heard Duncan kick in the 108 ‘officer down’ call, so I knew the cavalry was coming.”

"Hey! We just witnessed a police officer getting shot!” one witness recorded on his cell phone.

“I still didn't know where the shooter was at, if he was on the balcony or the ground level,” Abney remembers.

With sight in only one eye, he sees a woman motion him into a nearby store.

“When I got to her, I just like baseball slid into the doorway. And at this point, I’m kind of going into shock and some guy came over to me and he started to help me.”

Remarkably, he'd soon learn the woman was a former army medic, the man a current ER doc. What are the odds?

“I'm starting to hyperventilate,” Abney said. “They're telling me to control my breathing and I'm freaking out because I've been shot in the head.”

Meanwhile, all hell is still breaking loose on the streets.

“I looked down St. Philip and the shooter was hiding behind a car!” a witness exclaims.

While Abney lay bleeding, back up arrives -- a first district policewoman.

“She says get up and run!” Abney recalls, “And I said so we're gonna run again?!”

They run to her patrol car. There is no time to wait for an ambulance.

“We couldn't. I was starting to lose that airway when we were on the floor in the shop.”

As police raced to UMC, the shooter raced down the street and right into a man leaving work, slowing the suspect down enough for other officers to catch up. The suspect is apprehended within minutes.

Meanwhile, Officer Abney is rushed to the ER. He doesn't lose consciousness, but he is losing his breath.

“If you can't control your breathing,” Abney remembers the doctors saying. “We're gonna have to intubate you. I said ‘do what you gotta do.’”

Abney’s muscles clench. They give him a drug that paralyzes him, but he can still see and hear.

“I could hear them say he needs more O2 and another said he's oversaturated. In my head I'm thinking ‘I need more oxygen!’”

It gets worse when they remove him from the machine for testing and manually pump air into his lungs.

“That's the closest to thinking I was going to die because I wasn't getting enough oxygen with the bag valve mask.”

Abney remembers saying a prayer as his world went dark.

“The world starts collapsing, gray, gray dark and you can only see a pin hole. I thought I was gonna die at that point,” he said. “There was kind of like sadness because I knew I had a big family to support so I knew I was going to be leaving them. That's a lot of people that this is going to impact. Almost like letting them down, kind of.”

Meanwhile, across the lake, Abney’s fiancé Randi Hufft was at her parents’ home.

“It guts you. It was hard. It was horrible,” she said.

Like every day, Hufft said the last thing she had said to Trevor that morning was, "You come home to me."

Instead, she got the call she’d always feared.

Officers picked her up and personally drove her to UMC. It was nearing 5 p.m. and the ambush was breaking news.

“I saw the police car riddled with bullets and saw the sign that said Royal Street and I said, ‘Oh no.’”

Abney’s mother recalled not a moment later her phone rang. It was left to her to tell Trevor's dad.

It's a 37-mile trip and as they sped across the Twin Span, she prayed they make it in time.

“After watching it on TV, I told my husband if we get to tell him goodbye we're gonna be lucky,” Teresa Abney said.

It was Randi who saw Trevor first.

He was unconscious and a machine was breathing for him.

Fearing the worst, Randi said goodbye. She had no idea Trevor was about to make an extraordinary comeback.

“The doctors were like, ‘Give us a thumbs up if you can hear us.’"

Trevor was aware that he was aware, but he couldn’t communicate.

“My eye was open and I could see them and hear them and I can understand what he's telling me,” he remembered. “I just can’t physically do it.”

But with time, he regains strength. His brother is the first to realize Trevor's hitting the side of the bed is not an involuntary twitch.

“He knew me better than anyone. he was like 's***, he wants to write!’ They got me an ink pen and a piece of paper. It was short.”

Not long after he regained consciousness, the doctors showed Trevor his X-ray. He said he almost passed out. The bullet is lodged dead center in the middle of his brain right between his eyes.

“With all the medical training I've had, I’m like there's no freaking way I should have survived that!” he said.

Trevor’s mother wasn't shocked, though. As a baby, Trevor was the miracle it took her eight years to conceive, and once he pulled through those first hours, she expected another one.

“I was thinking, we're gonna get through this somehow. He's gonna make it,” she recalled with a big smile on her face.

And it's hard to argue she didn't get her second miracle--the Army medic in the store, the ER doc and that bullet's trajectory.

It still baffles Trevor himself.

“I definitely got a little more religious after that. That's not just pure luck. For it to wiggle its way around all that and not cause massive hemorrhaging, there's something else going on there, so I've definitely been doing a lot more praying than I did before.”

The 40-caliber bullet with a full metal jacket is still there, right in the bullseye. But no metal or malice could keep Officer Trevor Abney down--- or from keeping his promise. Five days after his fiancée told him to come home to her, five days after he was ambushed, he did.

“That’s the first thing I told her when I got to the driveway, ‘I’m home...held up my end of the bargain.’” Abney said.

Life after the ambush

Officer Abney was ambushed by a fellow veteran.

Abney and his family say they don't hate the man, but they are angry and have only one question—why?

Abney is still blind in his left eye and because of the location of the bullet, he could face many medical challenges ahead.