Increase in Entergy bills have customers scrambling for answers

"I've never seen is like this before ... This is ridiculous. My bill is double, for what? It's ridiculous because I don't know what this is." 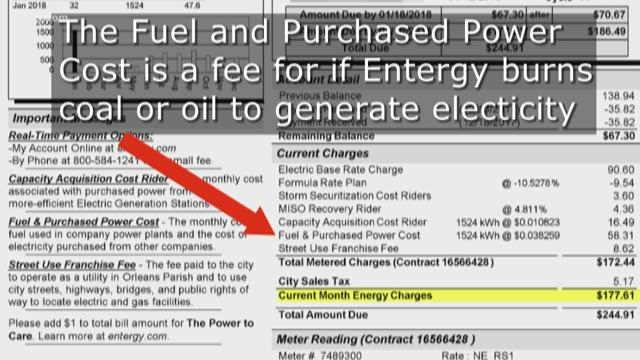 NEW ORLEANS -- Big Chief Monk Boudreaux is taking time away from sewing his Mardi Gras Indian suit to talk about his Entergy bill.

He, along with hundreds of others, has a big problem with a major increase in charges.

"I've never seen is like this before," Boudreaux said. "This is ridiculous. My bill is double, for what? It's ridiculous because I don't know what this is."

There are several different fees on his bill, so we talked to Entergy New Orleans about what each one means. This is the breakdown:

All of these fees have been approved by City Council.

And what you're not seeing on your bill, but you are paying for, is energy lost between the power source and your home.

"Our distribution system is very outdated," said Logan Burke, executive director at the Alliance for Affordable Energy. "Lines, poles, those lines have been neglected and we lose a lot of power through those inefficiencies."

We asked if that full cost is charged, even if all the power doesn't reach customers. Toni's answer: "Exactly."

"If I use it I don't mind paying for it, but if I don't use it, why do I have to pay for something I don't even use?" Boudreaux asked. "It's right for them, but it's wrong for us."

While Big Chief Boudreaux is popping his needle, hundreds of people in New Orleans sounded off on Facebook and Twitter about expensive Entergy bills.

"I know it got cold for a spell, but I don't think my bill should be double," he said.. "They know I'm going to pay it, I don't have a choice but it's not right."

For more information on understanding your Entergy bill, click here.