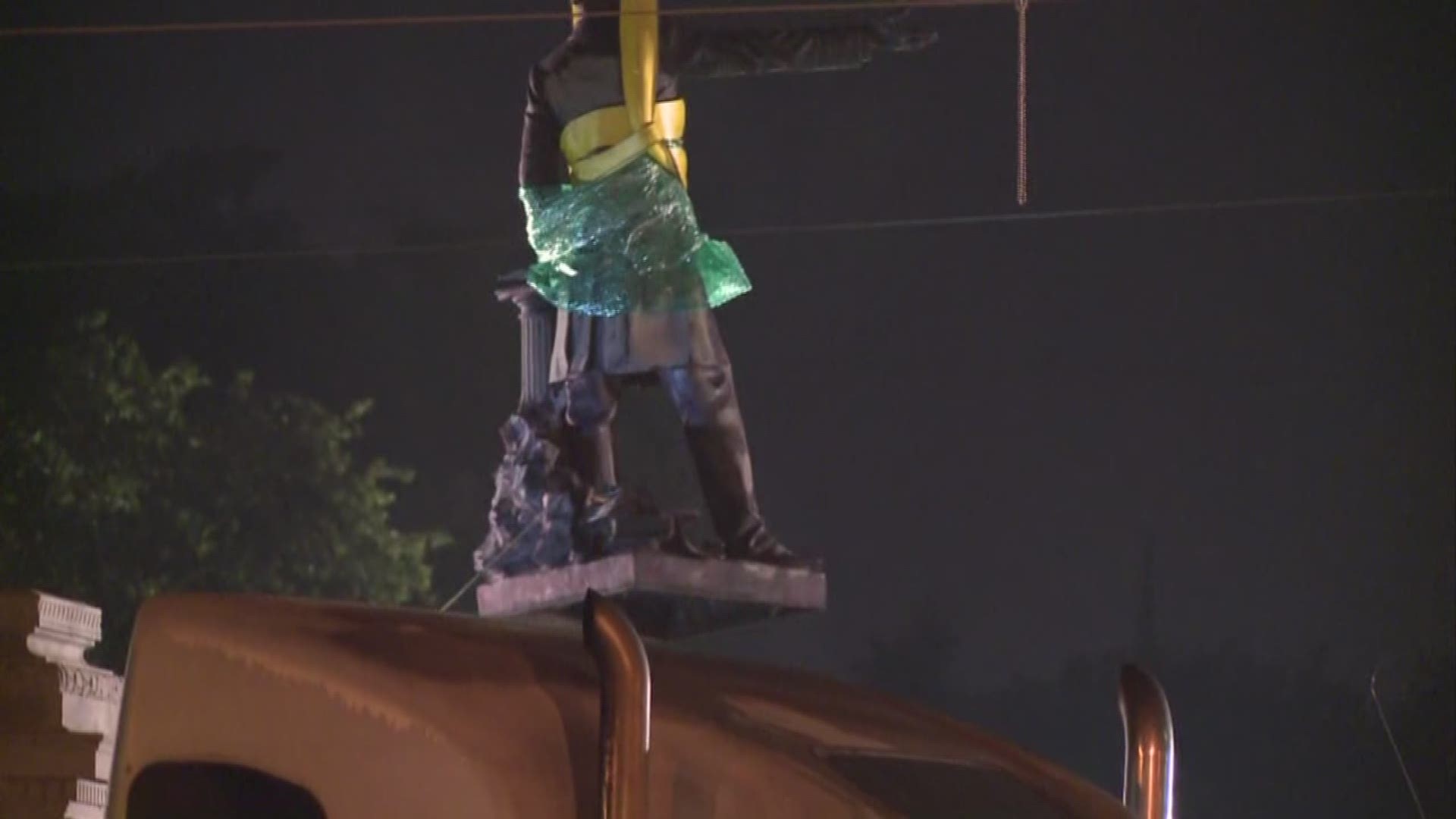 NEW ORLEANS - A large police presence as well as large cranes and heavy equipment were all part of the removal of the monument to former Confederate President Jefferson Davis early Thursday, May 11.

Workers who showed up to work on the removal were again shrouded with masks and dark clothing as the city has said there have been threats made against those participating in the removal.

Crews showed up shortly after 3 a.m. and the actual removal of the statue was done shortly after 5 a.m. as a sling and bubble wrap were put around the statue before it was hoisted in the air and laid down on the bed of a truck.

"This morning we continue our march to reconciliation by removing the Jefferson Davis Confederate statue from its pedestal of reverence," said Mayor Mitch Landrieu in a statement.

The two factions were separated behind barricades, just feet apart from each other. Shouts, insults and profanity laced the verbal exchanges.

The Jefferson Davis Memorial was removed about two and a half weeks after the monument to the Battle of Liberty Place was taken down. Still slated for removal, at a time to be determined, are the statue of Robert E. Lee at Lee Circle and the statue of P.G.T. Beauregard at the entrance to City Park. There is no timetable for their removal, though Landrieu has said repeatedly that it would happen "sooner rather than later."

"Another historic monument was removed under the cover of darkness using amateur, masked workers in armor, unmarked vehicles and equipment with a heavy police presence," said Peter McGraw, president of the Monumental Task Committee in a statement. "Landrieu cannot be inclusive, tolerant or diverse when he is erasing a very specific and undeniable part of New Orleans' history."

"Three weeks ago, we began a challenging but long overdue process of removing four statues that honor the "Lost Cause of the Confederacy. Today we continue the mission," said Landrieu.

Like that monument, the Davis memorial was taken down in the wee hours. Unlike the previous removal, this one had a larger group of people to protest its removal.

The city began the process to remove the monuments late in 2015, but court challenges tied up the move - approved by the city council in a 6-1 vote - until recently.

In fact, a legal challenge was heard Wednesday morning on the status of the P.G.T. Beauregard monument, which sits at the entrance to City Park. Also slated for removal is the statue of Robert E. Lee at the city's iconic Lee Circle.

That location was the site of a large demonstration on Sunday by groups dedicated to removing the monuments. A few hundred monument supporters, many waving Confederate flags, stood to voice opposition.

1 / 32
<p>Protesters surround the monument at Lee Circle in New Orleans May 7, 2017. Lee Circle is one of four Confederate monuments slated by the city for removal. Photo via Wynton Yates / WWL-TV</p>