The six days will be spread through the last six pay periods of the year, meaning employees caught up in the furloughs will only make 90% of their normal paychecks. 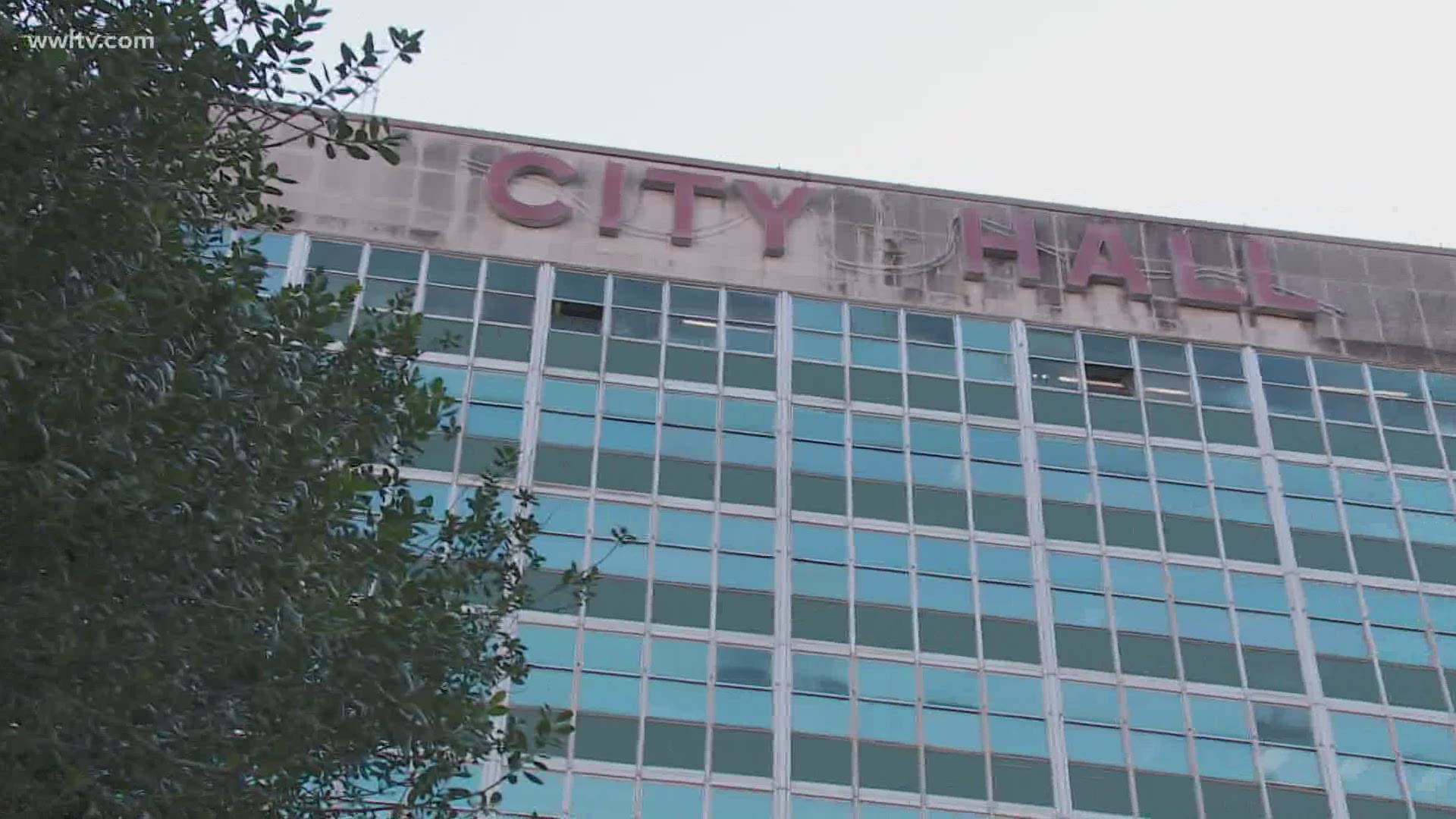 NEW ORLEANS — City leaders announced furloughs and government-wide budget cuts Monday, forced by revenue losses caused by coronavirus lockdown restrictions eating into the amount of taxes the city has been able to collect.

"We have realized the bottom of our economy has dropped," she said.

For months, Mayor LaToya Cantrell and other top officials have given dire warnings about the impact of COVID-19 restrictions on the city's bottom line, even as they continued to loosen those restrictions at a slower rate than other parishes in the state.

She announced the cost-saving measures at a Monday morning press conference, saying she would take six furlough days in 2020, alongside most other city employees. 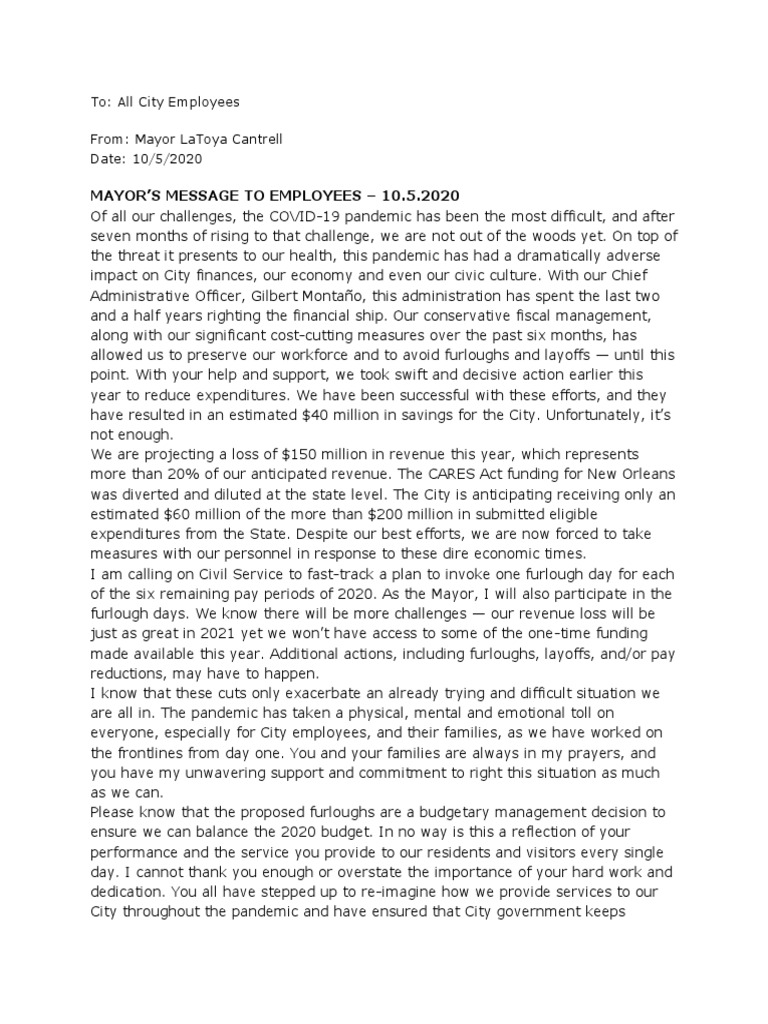 Cantrell Furlough Memo | Economies | Government
Date: 10/5/2020 Of all our challenges, the COVID-19 pandemic has been the most difficult, and afterseven months of rising to that challenge, we are not out of the woods yet. On top ofthe threat it presents to our health, this pandemic has had a dramatically adverseimpact on City finances, our economy and even our civic culture.

The six days will be spread through the remaining six pay periods of the year, meaning the approximately 4,000 city employees who will be caught up in the furloughs will only receive about 90% of their paychecks through the end of the year.

Cantrell said she and other unclassified employees -- employees with salaries -- would all be asked to work through their furlough days. The six days would essentially act as a pay cut for them.

"We have done everything possible to avoid taking personnel actions," Cantrell said.

The furloughs are expected to go into effect Oct. 10, but must still be approved by the city's Civil Service Commission, which is a five-member board appointed by the city council. 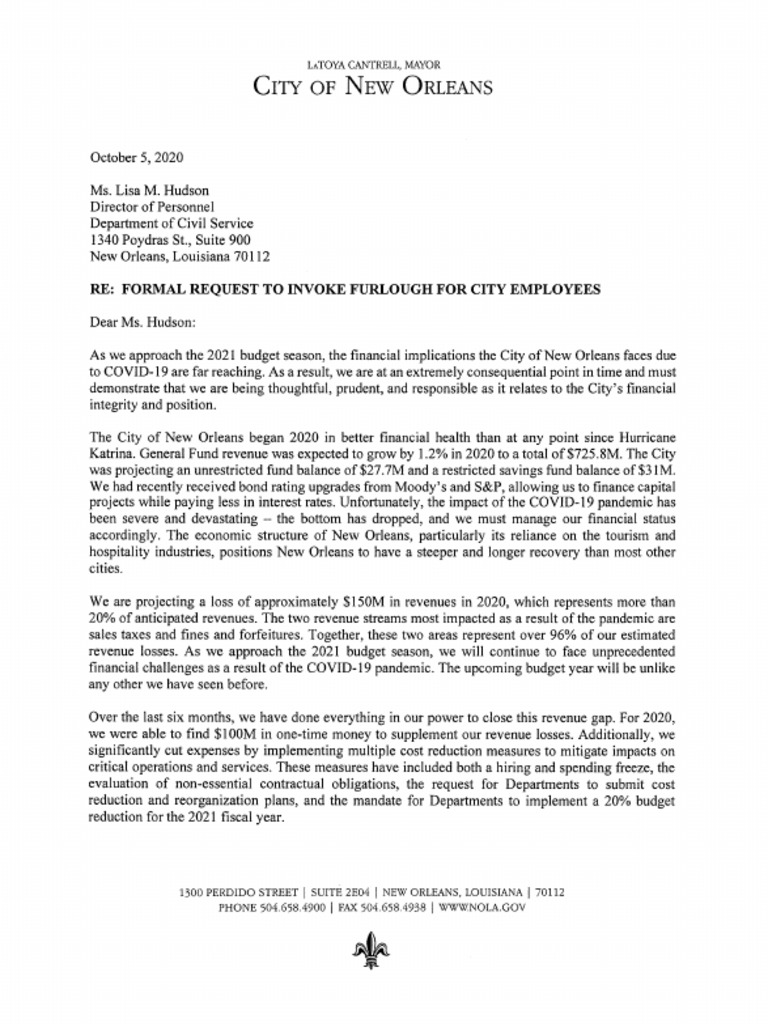 Although the city had its strongest economy since Hurricane Katrina going into the pandemic, seven months of severely reduced business in Orleans Parish has burned the city's surplus down to nothing, leaving them with a projected $150 million deficit headed into 2021.

Because of one-time money, largely received through the CARES Act and a deposit by Harrah's, city officials will only need to cut about $40 million to be out of the red when the new budget begins.

"We had almost $100 million in one time revenues that we will not see again," said Gilbert Montano, the city's chief accounting officer.

"It is a heavy day for the city of New Orleans," he said.

The furloughs are expected to save about $6 million in total. Alongside the personnel cuts, city offices have submitted cost-cutting plans for the rest of the year, and a hiring freeze has been issued across the board.

But the CARES Act, a $2.2 trillion aid package partly earmarked to help local governments get through the coronavirus pandemic, has largely failed to reimburse New Orleans' coffers. Cantrell said around $200 million in expenses were considered reimbursable through its funds.

"This really would have been an economic lifeline" to avoid furloughs, Cantrell said.

But because the money is trickled down through the states, most of the dollars requested by officials haven't reached New Orleans. Louisiana has received $1.8 billion in aid. New Orleans only saw $60 million, less than half of what city leaders say they are owed.

Cantrell said businesses in Orleans Parish have lost at least $2.67 billion because of the pandemic.

In the coming weeks, city accountants are expected to release a draft budget outlining the funding plans for fiscal year 2021. The draft budget will then need approval by the city council before it can go into effect.

But even if the city is able to dig itself out of the current hole before the end of the year, the coronavirus is not going away, and it will likely continue to cause chaos in the city's budget -- which could mean more furloughs, or even firings.