New Orleans' vacant and blighted landmarks: Here's where some of the projects stand

Why do so many buildings sit as hulking, rotting wastelands while projects to renovate them seem to constantly stall or fall apart? 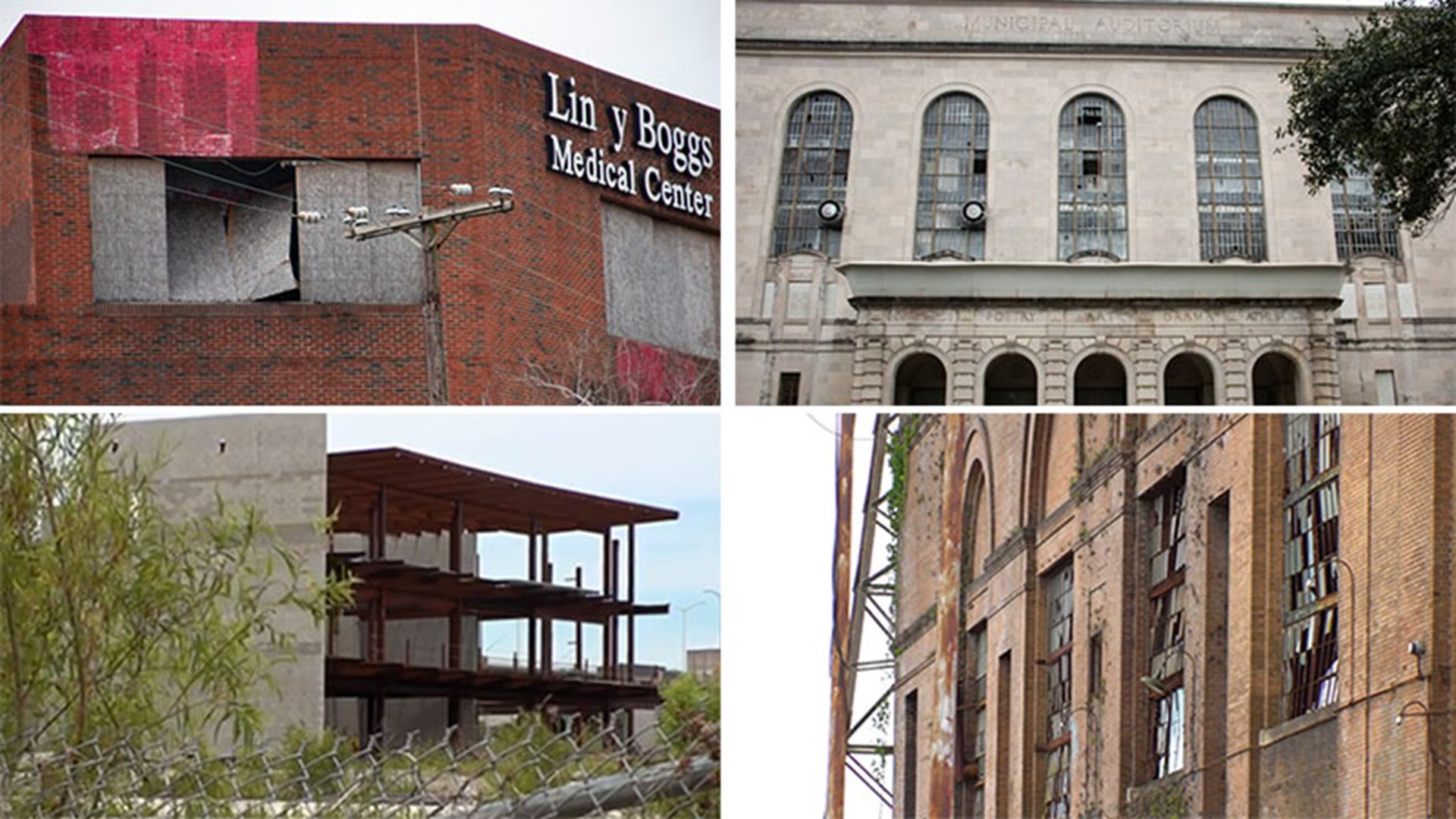 If you’ve lived in New Orleans for any length of time, you can tick off the areas that seem to be in constant disrepair. Many sit as hulking, rotting, shadows of their former selves – Six Flags, the Municipal Auditorium, the former Poland Street Naval Base, the former Lindy Boggs Hospital, the stalled driving range on the side of the old Times-Picayune building, the Brechtel golf course and the Plaza Tower, to name a very few.

Reporter Danny Monteverde looks into some of those spots and what – if any – plans are in the works for those areas.

As thousands of New Orleanians race along the Pontchartrain Expressway every day, they see the same thing near the Broad Street overpass.

3800 Howard Avenue was the longtime address of The Times-Picayune, its clock tower a landmark along I-10. The modernist building met the wrecking ball in 2019. Drive Shack, a high-tech driving range, was set to take its place.

But construction stalled almost as soon as it began. A number of lawsuits from contractors allege they were owed millions in overdue bills. The driving range sits in a state of disarray, as walls of weeds grow taller each day, graffiti artists tag some parts of the unfinished building and greenery grows over steel beams.

Developers say they intend to finish the project, hopefully by 2023. Meanwhile, it sits as is.

Credit: Sam Winstrom
Once the location of swanky Carnival balls, high school graduations and concerts, the Municipal Auditorium is now nothing more than another boarded up building.

The Municipal Auditorium has been in a similar state of limbo for more than 15 years, a victim of Hurricane Katrina and bureaucracy.

It was once home to everything from concerts to Carnival balls to high-school graduations, Harrah’s temporary casino and the New Orleans Brass hockey team.

Mayor LaToya Cantrell envisions an entirely different use for the old auditorium: a new City Hall.

Neighbors, however, aren’t sold on the idea for many reasons, including the decision decades ago to bulldoze several blocks of Treme to build Armstrong Park.

“People here are still angry and hurt and not trusting the city government,” said Naydja Bynum of the Historic Faubourg Treme Association.

Yet another landmark building on the cityscape sits in a sorry state further upriver.

Plans to rehab the Market Street Power Plant, with its twin towering smokestacks, have been tossed around for years. They’ve gone nowhere.

Possible new owners hope they can be the ones to get something done there as part of a plan to build a new neighborhood at the Uptown end of the Convention Center.

Across the river from the Market Street Power Plant is the city-owned Brechtel Golf Course. It, too, has been vacant since Katrina.

A fire recently gutted the old clubhouse, and weeds still dominate the greens.

Neighbors in Algiers say it seems like the city has forgotten about it.

“Beginning of the Landrieu administration there was a list of 100 projects that were supposed to get done. And it was on that list budgeted, I think, for seven to eight million. And nothing ever got done with it,” said Rob Zrabowski of the Aurora Gardens Neighborhood Association.

“It’s frustrating to know that that happened and it’s doubly frustrating not to know why and who made that decisions and how these decisions get made.”

Back on the east bank, the Lindy Boggs Medical Center in Mid-City has been boarded up since the storm. Promises to rehab it have come and gone, but it continues to crumble and collect citations from the city.

Mayor LaToya Cantrell recently hinted that something could finally happen.

“There are plans for redevelopment that are forthcoming, and I know from previous meetings,  actually, most recent meetings, that there’ll be some good news coming to the public about the full restoration.”

The obvious questions: why does it take so long for some buildings to get a new lease on life, and what can be done to speed up the process? We’ll explore those answers in the coming days.