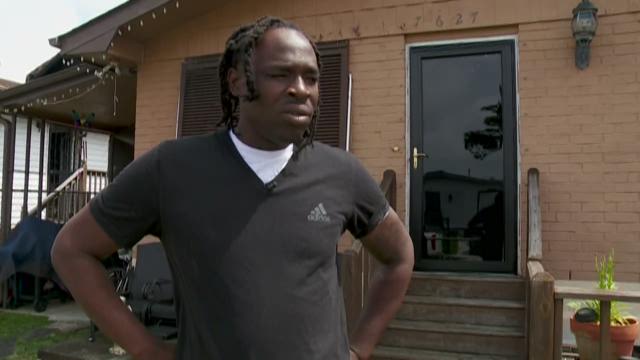 The New Orleans East man lives two doors down from a house in the 7600 block of Shorewood Boulevard in the Little Woods neighborhood that caught fire Thursday night.

He ran down the block when he saw smoke and heard children scream. He crawled into the burning home with a neighbor to try to rescue a 3-year-old boy who was trapped in a back bedroom.

“Once I heard there was a kid in there, I forgot about the fire and went in the house. I wasn’t worried about the fire,” Roberts said Friday. “At first he was screaming, then he stopped screaming. That’s what made it hard for us to find him.”

Roberts and his neighbor pushed through heavy smoke and even used a fire extinguisher to put out some flames in the kitchen.

The other neighbor, who didn't want to be identified, said it took two tries to find the child. "He was wrapped up in a blanket and he wasn't making no noise. ... I just did what I'd want someone to do for me."

Roberts said he wouldn’t hesitate to run into the burning home again. “I’d do it every day to save somebody’s children.”

There were seven children home alone when the fire began. The oldest is 15.

Fire officials said the fire appeared to begin in the kitchen trashcan.

“The 15-year-old said that all the other children were outside and the 3-year-old was inside alone when she noticed smoke,” said Fire Superintendent Tim McConnell.

McConnell said he’d like to recognize the neighbors who risked their lives to save other.

“We don't encourage people to go in and do that. In this case, they did a commendable job rescuing that 3-year-old child,” McConnell said. “The child, unfortunately, was in there alone and forced them to have to do that.”

“All life matters,” Roberts said. “If somebody's life need to be saved, I'll jump in and help if I could.”