Assessor Errol Williams says it’s important for property owners who feel their assessment increase is wrong to bring it to his office's attention. 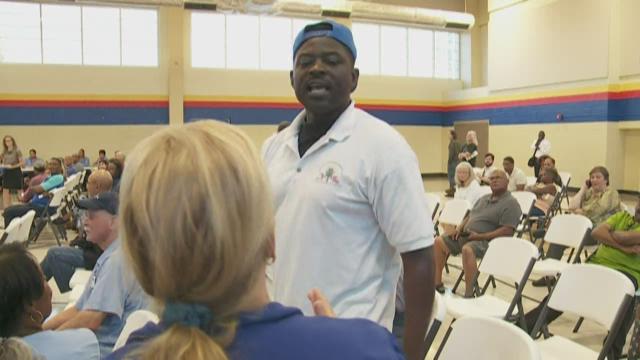 NEW ORLEANS — Tandra Smith has been living in her Fairgrounds neighborhood home since 2008.

"A lot of my neighbors have been here longer than I have," Smith said.

She said she likes the area, mainly for its affordability, but after seeing her recent property assessment skyrocket she fears she won't be able to live here much longer.

She said her assessment last year valued her property and home at $167,000, which she said was reasonable because she purchased her home at $135,000. This year's assessment, which by law has to happen at least once every four years, put her house value at $416,000.

“I wanted to cry,” Smith said.

It's a problem many people said they're noticing. Smith and dozens of others expressed those concerns at a community town hall Monday night Corpus Christi Community Resource Center on St. Bernard Avenue.

Errol Williams, Orleans Parish Assessor, attended the meeting to help clarify any concerns. Many people came to the front to ask questions.

“We applied the formulas equitably among everybody,” Williams said.

Williams said if someone has an assessment increase that they feel is wrong, to bring it to his office.

When asked about Smith's large assessment estimate, for example, though, Williams said he didn’t think the value increase was extreme.

“In the past four years there's been substantial increase in values in perspective neighborhoods.”

Williams said while people fear they are being pushed out of their homes this way, gentrification is “happening all over the country.”

“Gentrification is happening not just in New Orleans but all over the country and what you're seeing is people are buying in neighborhoods, renovating their properties and selling it for substantial more. So we can't ignore that. I can't treat them separately,” Williams said.

Williams called said it is “a tough situation.” He also said it’s important for property owners to bring their issues to the Assessor's attention.

There could be exceptions made if there are issues surrounding their property, or if parts of someone’s property are in poor condition. The Assessor’s office could look that over as a factor and possibly make adjustments to the value estimate.

The Assessor’s office says The Louisiana Constitution requires the assessor to review the value of all properties in a parish at least once every four years.

It’s city and state taxing authorities,  not the assessor, that set the rate at which property gets  taxed.

The assessor estimates the value of the property. If your property’s value increases and the tax rate remains the same, the Assessor's office says you will most likely pay more in property taxes because the calculation of your taxes is based on the estimated fair market value of the property.

The Louisiana Constitution requires residential properties and land to be assessed at 10 percent of their fair market value.