Construction projects throughout the 1900s left the community scrambling to hold onto the fabric that made it a community. 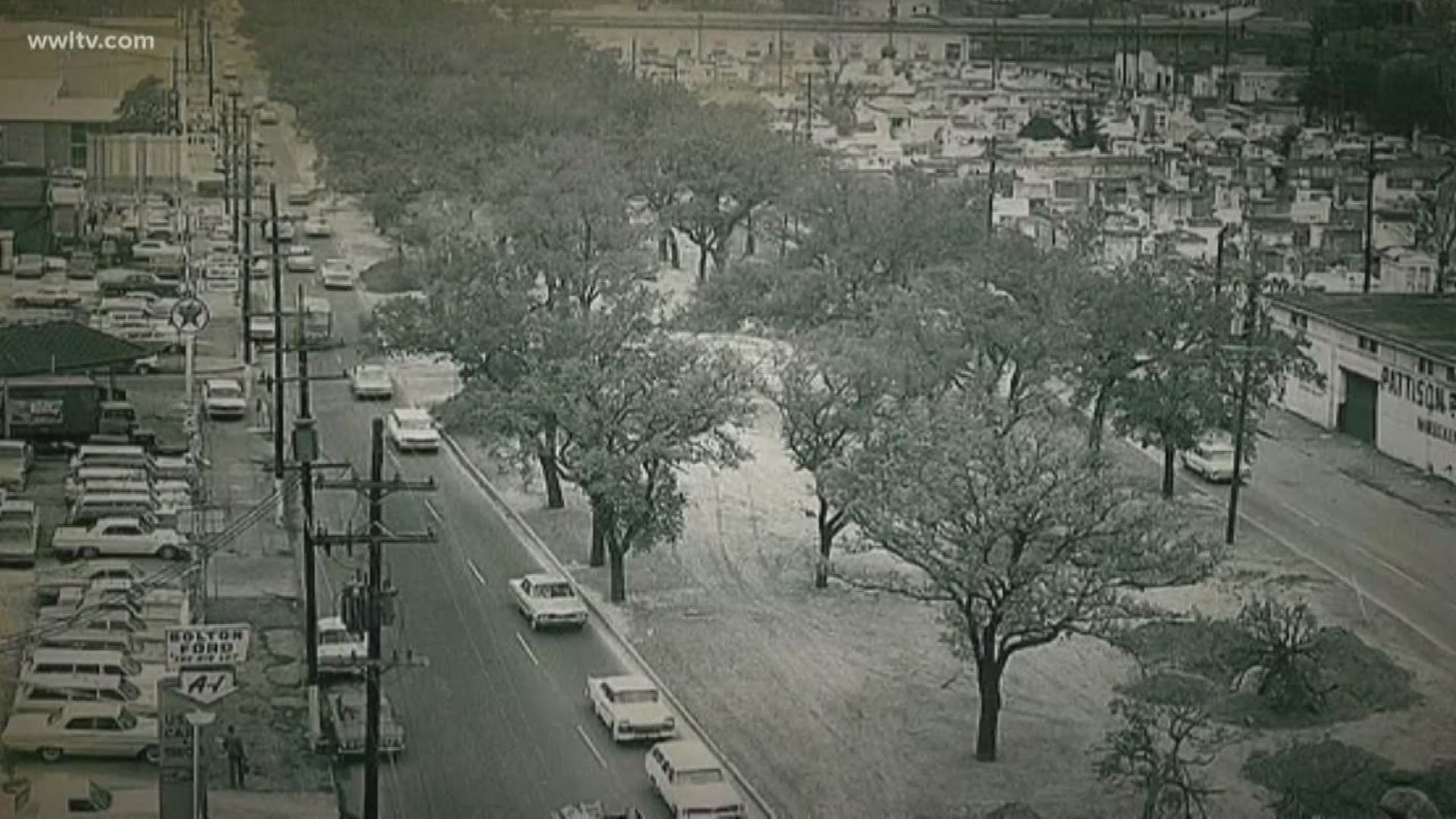 This is part two of Charisse Gibson's three-part "Tremé: Death of a neighborhood, survival of a culture" series about the downfall of the historic New Orleans neighborhood. Click here to read part one. Click here for part three.

NEW ORLEANS ⁠— Congo Square's surroundings are ever-evolving, as many say attempts to modernize New Orleans come at the expense of Tremé.

“It was known by the Spaniards in the 1760s, when they took over Louisiana, as Plaza Los Negros, ‘the Black Place,’” says historian Al Jackson, owner of the Tremé Petit Jazz Museum. But of course, it became known as Congo Square: Where the indigenous were allowed to congregate.

Dr. Eric Johnson is the President of Urban Regeneration Advisors. When talking about the forces that took down Tremé, he says they were swift and unforgiving. He says the square created a strong footprint, but it was massive projects that permanently cut through the heart of the neighborhood.

The I-10: Its construction was the culmination of outside development pressure that Tremé had consistently faced since the end of the 19th Century, Johnson says.

“When you look at a neighborhood and what took it down, it's never one thing. It's a gumbo of things, but I can tell you unequivocally that nothing traumatized Tremé more than the building of the I-10,” says Fred Johnson, CEO of the Neighborhood Development Foundation.

Before, North Claiborne Avenue was home to a bustling business district.

It was estimated more than 120 businesses ran along the corridor, with hundreds of oak trees lining the way, much like St. Charles Avenue today.

But to build the highway, the state took over several properties along Claiborne between Tulane and St. Bernard avenues. Some referred to it as "The Monster."

The building of the I-10 overpass over North Claiborne sent the businesses district into economic decline. Today, only a few dozen businesses still stand.

Charbonnet Funeral Home is one of them, sitting along Claiborne Avenue since 1883. Louis Charbonnet III is the president of the home and a former state representative. He says everything changed when the highway came along.

“It ran all the family-owned black businesses away. What Magazine Street is now, Claiborne Avenue used to be like that. With all kinds of African American owned businesses, insurance companies, grocery stores, mattress companies, anything the neighborhood needed, drug stores; all that left when the interstate came along,” Charbonnet says.

Originally, the elevated highway plan proposed in the 1940s was to spare Claiborne Avenue and a highway would have gone from Elysian Fields Avenue, along the riverfront in front of Jackson Square to Canal Street, then descend into a tunnel.

It would have been called the Vieux Carre' Riverfront Expressway. But French Quarter preservationist fought that plan for decades. In 1969, they won their battle.

But the opposition of those living in Tremé wasn't enough to stop the plans from moving forward there. In 1966, crews began to destroy the neutral ground, replacing oak trees with tall, cement pillars.

“It was the thing that projected me to go into politics, I got elected to the legislature because we had no voice. We had nobody in the government that was standing up for our community,” Charbonnet says.

A former representative, Louis Charbonnet III served in the statehouse from 1972-1984.

“We used to have kids playing, we had the neutral ground on Claiborne Ave which was the largest and prettiest neutral ground in the city. We used to play and there were oak trees in this area, and it was just a wonderful place to grow up in. We don't have it anymore,” Charbonnet says.

Today, the only sign of oak trees are those painted on the pillars beneath the highway. Dr. Raynard Sanders and other preservationists painted the trees as part of the Claiborne Avenue History Project, as a way to remember what this street was to Tremé.

“Every community has a commercial hub. Now in NOLA, we have several that served the black community but none like Claiborne Ave. So when you talk about Claiborne and the interstate and you talk about Tremé, you talk about the emergence of all the city is known for: Jazz, Mardi Gras, Indians, food, everything came from that community,” Sanders says.

While the long avenue is still a destination to meet on Mardi Gras day and brass bands have taken advantage of its echo, it's still hard for some to picture this area in its heyday.

“You had black businesses mostly, you had some white businesses too, right down on LaHarpe and Claiborne. One was Heckman’s that sold ballet leotards. Everything you could find right here on Claiborne,” Sanders says.

PART 1: Tremé: Death of a neighborhood, survival of a culture

In attempts to right the wrongs of the interstate, there have been federally-funded studies to examine how to bring North Claiborne Avenue back to its original glory. Sanders participated in one study with the Claiborne Avenue Design team, meant to “Bring Back Business.” Unfortunately, it didn’t lead to change, he says.

“Put it on the shelf, didn't hear any more about it and in essence, they were just giving money to the community to quiet us down because we were complaining. Nothing came out of it. It is just a well-documented study,” Sanders says.

Even if the elevated highway were to be taken down, most feel the damage is irreparable.

“I don't think it could ever come back unless there is a concerted effort to open up opportunities for those businesses to return physically. And that is not something that has happened,” Sanders says.

Tremé residents and historians say the expressway was not the first assault on the neighborhood. Negative changes started before, especially with the creation of Louis Armstrong Park.

Gentrification of the Tremé neighborhood began with the building of the Municipal Auditorium, tearing down the historic Tremé Market in the 1930s.

Each decade after, "urban renewal" projects targeted Tremé and surrounding communities. The state and federal government implemented renewal plans and "slum clearance" that displaced hundreds of African American families from their homes in the process.

Dr. Eric Johnson says the the origins of the people anchoring the neighborhood made it undesirable to those on the outside.

“We tend to talk favorably about Storyville but we look at the elements of Storyville, you look at the notion of ‘well, there are African Americans there, free people of color.’ People would not necessarily place a higher value on people living in those neighborhoods,” Johnson says.

“If you look historically at policies that came out of the federal government in terms of cities, and how those policies and approaches were implemented locally, New Orleans was no different than any other city in terms of urban renewal, this sort of concept of removal of blight for issues and causes that may not necessarily have been the case,” he says.

Initially thought of in the 1920s, plans to build a "cultural complex" in the space that now houses Armstrong Park resurfaced in the 1960s. Dozens of city blocks in Tremé were leveled.

“It was supposed to be the opera center. That didn't work so they talked about making it an amusement park-like Tivoli Gardens in Europe and that didn't work so now it's just an open space which is nice but that used to be homes,” Charbonnet says.

Another point of contest was the fencing of the park. Activist and community leaders argued the fencing created a rift

“I think that community felt very betrayed because there was never going to be a fence, it was really kind of sold to Tremé like this was going to be a beautiful green space that will be integrated into the neighborhood and that didn't happen. You can see when you drive down the street it almost feels like a wall between Armstrong Park and Treme' so I think they feel that any major development or infrastructure innovations, that, really, there's going to be an underlined theme to kick people out or to separate them and you see that a lot in disadvantaged communities,” says Kristin Palmer, New Orleans Council representative for Tremé.

Tremé residents were fed up and in 1969, the Tremé Community Improvement Association formed. It was aimed at fighting back against further destruction or displacement in the historic neighborhood under the guise of "Urban Renewal."

They were instrumental in negotiating on behalf of residents and getting the Tremé Center established in the area. Yet, still, historians estimate more than 400 families were scattered throughout the city.

"The place was torn up, folk were displaced overnight, they moved in with the bulldozers. That would not have happened to any other neighborhood where we don't live. My children's great-grandmother died before she received her just compensation for the family home she owned," Al Jackson says.

"It's still traumatic for the community and for people who had family here so when that happened you lost some of the architectural buildings and bars and houses," says Adolf Bynum, Tremé resident.

Construction projects and urban renewal left the community scrambling to hold onto the fabric that made it a community.

And then, the perfect storm opened the floodgates to a new wave of issues, leaving Tremé clinching to what was left of it's culture...

Watch Part 3 of Tremé: Death of a neighborhood, survival of a culture Wednesday night on the Eyewitness News