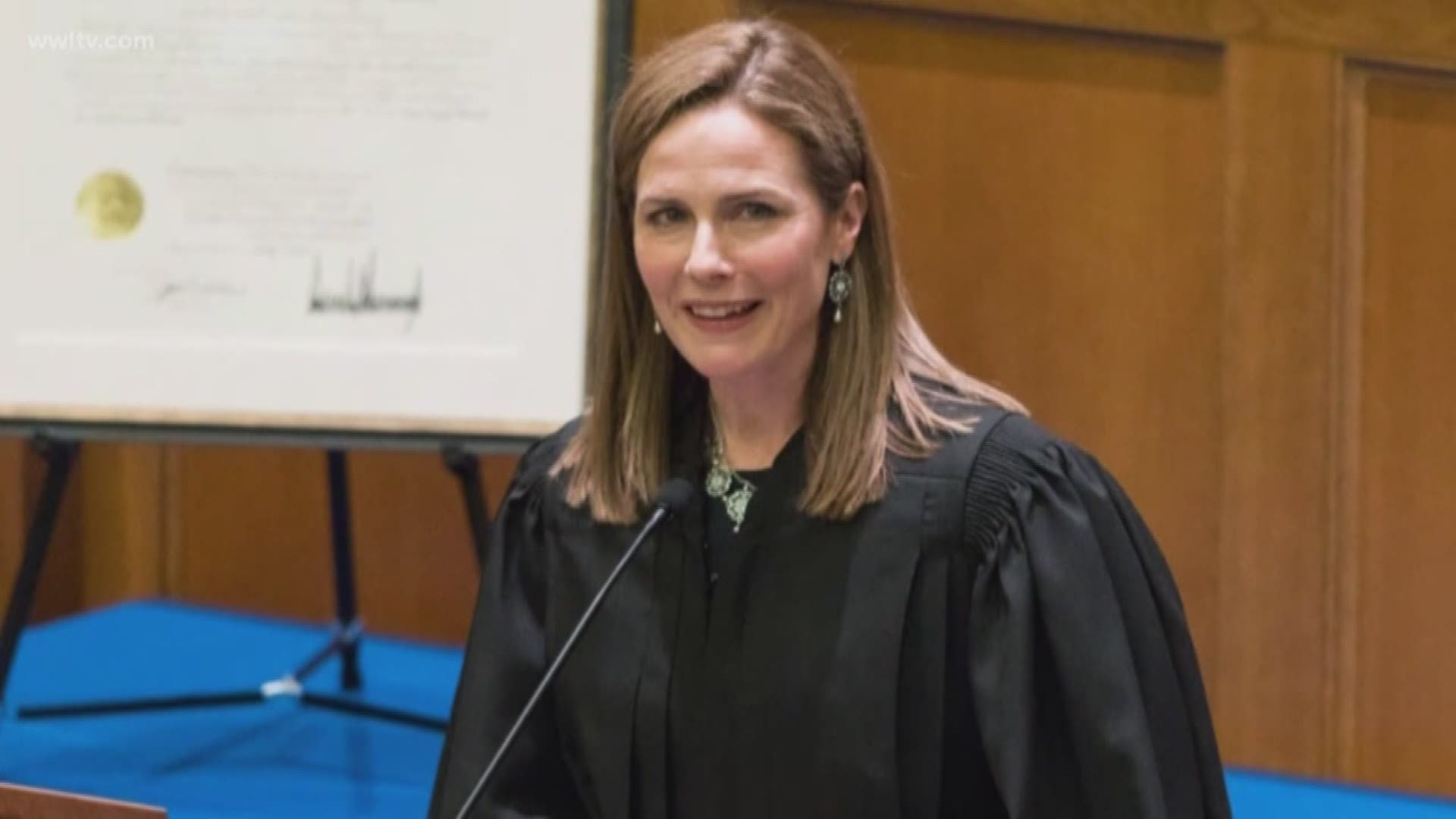 NEW ORLEANS — Amy Coney Barrett, a New Orleans native was nominated by President Donald Trump to replace the late Justice Ruth Bader Ginsburg on the Supreme Court. Barrett was considered a possibility previously when an opening to the court came in 2018 with the retirement of Justice Anthony Kennedy.

President Trump has indicated that his selection to replace Ginsburg would likely be a woman and Coney Barrett was one of the names on the list.

Barrett was born in New Orleans in 1972. She grew up in Old Metairie and attended St. Catherine of Siena elementary school. According to The Times-Picayune | The New Orleans Advocate, she is a 1990 graduate of St. Mary’s Dominican High School in New Orleans, where she was class vice president. In 2018, the school named Barrett its Alumna of the Year.

She is the oldest of Mike and Linda Coney’s seven children. Mike Coney, an attorney, is a deacon at St. Catherine of Siena Catholic Church. Barrett is a graduate of Rhodes College in Memphis and earned her law degree from the University of Notre Dame in Indiana, finishing at the top of her class. She later taught law at Notre Dame and spent time in private practice.

After graduating law school at Notre Dame, Barrett clerked for Judge Laurence Silberman of the D.C. Circuit Court, and later for Supreme Court Justice Antonin Scalia, whom she considered a mentor.

As a sitting judge, she continues to teach constitutional law at the Notre Dame Law School. She has also been an adjunct faculty member at George Washington University Law School and a visiting professor at University of Virginia Law School.

In 2017, President Trump nominated her for the 7th Circuit Court of Appeals. She is one of 11 judges on the court, which is based in Chicago and rules on cases in the Midwest.

She was confirmed on a largely partisan 55-43 vote, with thee Democrats crossing party lines to vote for her. Two Democrats abstained from the vote.

Barrett is now an Indiana resident and is the mother of seven children with her husband of 18 years, Northern District of Indiana Assistant U.S. Attorney Jesse Barrett. Two of her children were adopted from Haiti and one has special needs.

She is generally seen as a deeply religious and conservative judge. In her 2017 confirmation hearing to the 7th Circuit, Democrats focused attention on her Catholic faith's influence on her judging. There is speculation that opposition from Democrats is the reason Trump put her on the shortlist to replace Justice Anthony Kennedy -- a job that ultimately went to Brett Kavanaugh, and why she was included as one of four women on Trump's possible nominee list published weeks before Ginsburg's death.

Because of Barrett's short time on the court, she does not have as large a body of opinions as some other circuit court judges. Based on the cases she has written about, her judicial philosophy appears to take inspiration from Scalia, her mentor and former boss.

Like Scalia, Barrett's decisions have largely been based in the text of the U.S. Constitution, rather than an interpretation of the words to modern situations.

In a 2003 Notre Dame paper and later in a 2013 Texas Law Review article, Barrett wrote that Supreme Court precedents are not sacred, and that the due process clause of the Constitution should limit their use in deciding later cases.

"Certain arguments may be overlooked or poorly made," she wrote in the 2003 paper. "Overly attractive or unattractive aspects of a particular litigant or lawyer's personality, circumstances, or demeanor might push a decisionmaker one way or another."

Opponents say this points to criticism of Roe v. Wade itself, with abortion advocates fearing that she would pose a threat to the decision itself.

Barrett's views on Title IX were illustrated in a 2018 ruling authored by her in favor of a male student found guilty of sexual assault by Purdue University. In the case of Doe. v. Purdue University, the court majority found that the school's investigating panel had discriminated against the plaintiff based on his sex and had not allowed him to adequately defend himself.

The ruling about fairness in Title IX tribunals, according to some, is a blow to the credibility of rape victims. Supporters say the ruling simply calls for fairness in the process regardless of gender or sex.

In 2019, Barrett wrote a lengthy dissent in the case of Kanter v. Barr arguing in favor of gun-ownership rights for felons. The majority opinion found that the Wisconsin Legislature was entitled to deny firearm ownership to all felons, even those convicted of nonviolent offenses.

In Barrett's dissent, she and argued that history and common sense say the legislature has the right to keep guns from "dangerous people" but "that power extends only to people who are dangerous."

In that rebuttal of the Supreme Court's decision in NFIB v. Sebelius, Barrett emphasized the need to apply "clear text" to the law. She said Roberts "creatively" interpreted the law's penalty on those who don't buy insurance as a tax, allowing the court to uphold its constitutionality.

Barrett's nomination marks the official start of what analysts believe will be a historic and divisive confirmation process.

Only one justice in the Supreme Court's history has died closer to an election that Ginsburg, whose deathbed wish was reportedly that she not be replaced until after the election.

In 2016, Senate Majority Leader Mitch McConnell denied a hearing to then-President Barrack Obama's nomination to replace Scalia. McConnell said at the time that the American people should have a say in the nominee through the presidential election.

At the time, Republican House Minority Whip Steve Scalise of Louisiana -- who as a member of the House of Representatives does not have an active role in court nominations -- wrote an op-ed expressing the same view.

But Republicans have largely turned around on that idea of waiting until after the election to confirm a Supreme Court nominee. McConnell vowed hours after Ginsburg's death that Trump's nominee would get a full Senate vote before the election. Trump has also confirmed he wants the Senate to vote "without delay" on his nominee.

Republicans are now splitting some hairs about the 2016 situation -- which drew outrage from the left but was cited as a top priority among Republican voters that year. They say their refusal at that time to hold a vote on Merrick Garland was based in the fact that Obama was a lame-duck president.

Now that Republicans control both the Senate and the White House ahead of the re-election bid for their candidate, things have changed, McConnell and other top Republicans have said.

There is some skepticism that there is enough time before the Nov. 3 election to confirm a nominee. The process usually takes place over several months, but if McConnell has the votes to confirm Barrett on a partisan vote, he may try avoiding the lengthy hearing process altogether.

If he takes that route, he risks angering Democratic voters ahead of an election where Republicans will be hard-pressed to keep their Senate majority.

If not before Nov. 3, McConnell could also try pushing through the nomination through a lame-duck Congress before new Democratic senators are sworn in.