'He saved us,' woman says officer who was shot in New Orleans East is hero

The woman said she was praying for the wounded officer, who she called a hero. 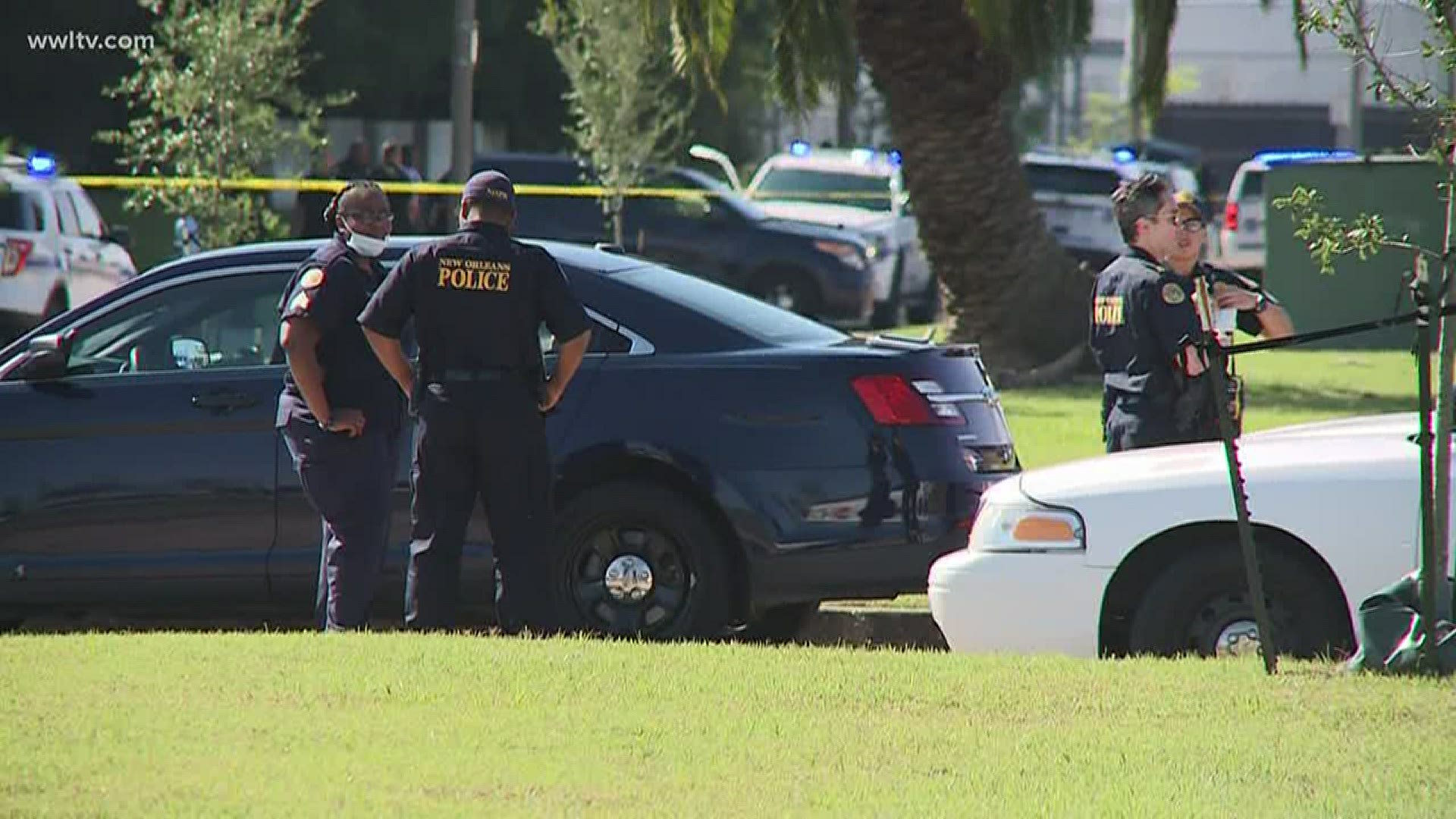 NEW ORLEANS — An NOPD officer was shot in the right arm and rushed to the hospital after an exchange of gunfire at an apartment complex in New Orleans East Tuesday morning.

Police Superintendent Shaun Ferguson said officers were responding to the report of an aggravated assault suspect in a residence in the 6700 block of Bundy Road.

"The officers entered that residence at which time an exchange of gunfire ensued," said Ferguson. "An officer was shot in the right arm... I had the occasion to see him at the hospital. He was in great spirits and was responsive in stable condition."

Ferguson said 28-year-old Horace Toppins was arrested and was not injured. He was booked Tuesday afternoon on a count of attempted first-degree murder.

The officer who was shot was not immediately identified.One woman who was inside the apartment at the time of the shootout posted video of the clash's aftermath. In the clip, the wounded officer is lying on the ground on his back and is being tended to by fellow first responders, who tell him "you're OK, you're OK" and "just relax." 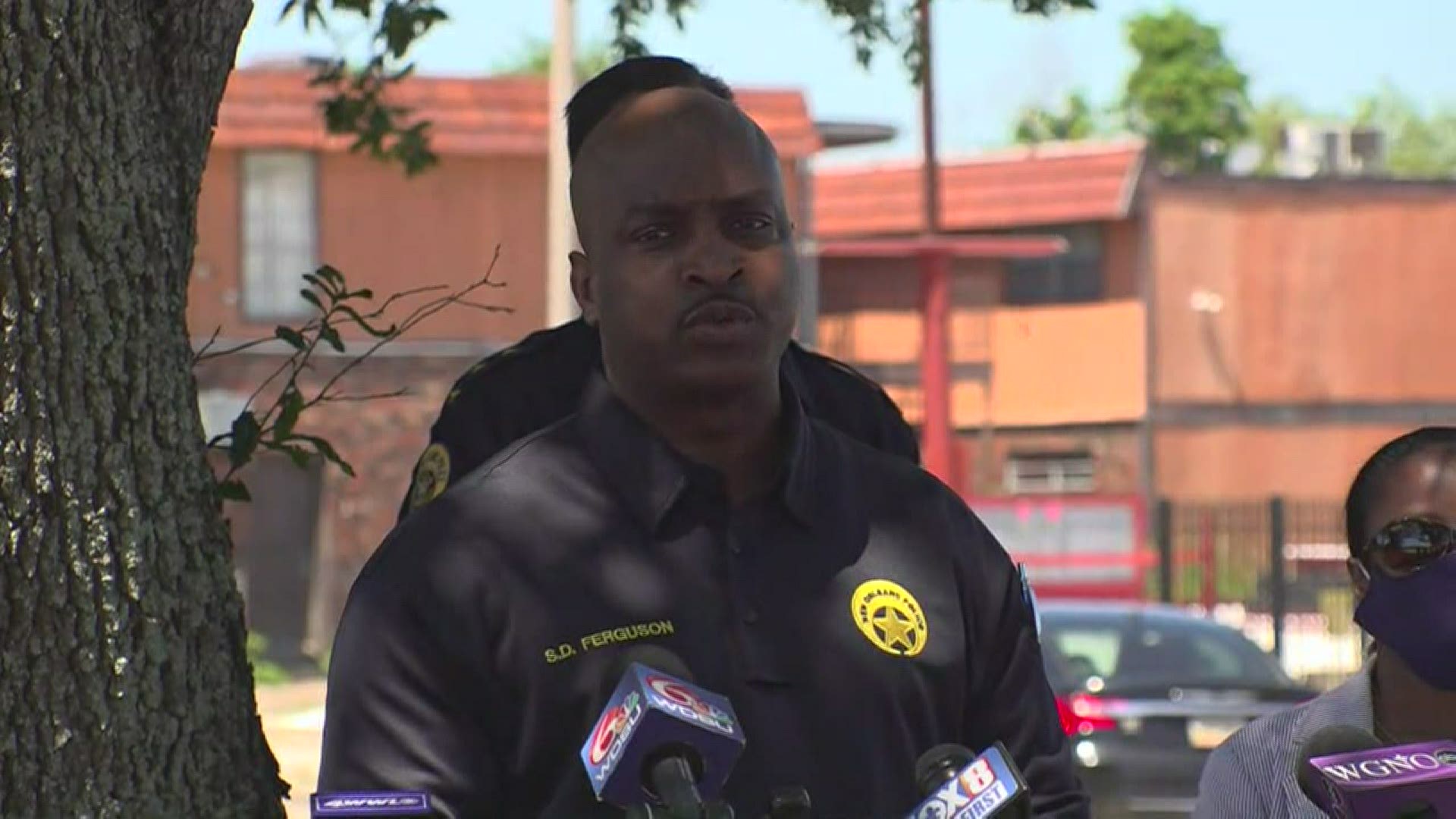 RELATED: Second suspect on the run, NOPD officers recovering after NO East shootout

The video was recorded through the cracked door of a bedroom where at least two women are huddled along with a toddler girl and a boy who is older. At least one of the children is crying while both women also sob hysterically.

The woman who posted the video described herself as a relative of Toppins' children's mother. She said that she heard at least five booms and a smell similar to that of fireworks fill up the apartment. She described the children as his babies.

"It was crazy," the woman said. Referring to Toppins, she added, "He said he was going out like a 'G,' whatever that's supposed to mean."

The woman — who identified herself as Kendra DeSilva — said she was also praying that wounded officer healed, calling him a hero. "He's a hero to me," DeSilva said. "He saved us."

Ferguson said the department's "video release policy" was enacted and the officers at the scene were temporarily reassigned pending an investigation.

"The individual we know has a history of domestic violence," said Ferguson, who said that the Force Investigation team and the police monitor are working on the case.Tuesday was neither the first time Toppins was accused of aiming a gun at police nor of shooting someone. In May 2016, at another New Orleans East apartment complex, he allegedly pointed a pistol at NOPD officers who arrived to investigate the sound of gunshots.

Toppins didn’t fire that time, retreating into an apartment for a while before surrendering. Toppins later made $15,000 bail to secure his release from custody, but later he landed back in jail following allegations in August 2016 that he shot his girlfriend in her elbow before forcing his way into her family’s apartment to threaten them with harm.

He pleaded guilty in November 2017 to both cases, admitting to counts of aggravated assault upon police, aggravated assault with a firearm, illegal use of a weapon and criminal trespassing. Ultimately, he received three years in prison, with credit for time he had spent in jail after his arrest in the second case, criminal court records show.

Prior to that set of legal troubles, records show he had spent time in prison after pleading guilty to unrelated charges of theft and resisting police.

Toppins has a string of arrests, including shooting a girlfriend in the elbow and pointing a gun at police officers, both within a four-month span in mid-2016. Toppins served a portion of a three-year prison sentence in those cases, but he’s been back on police radar since then.

“This individual, we do know, has had a history of domestic violence and that's all I can say about him at this time,” Ferguson said.

Since the coronavirus shut-down, Toppins has created domestic disturbances at the Bundy Apartments where he was arrested Tuesday, according to the complex’s owner.

“We were made aware of the situation in mid-March of recurring incidents within the location,” Property Manager Vincent Marziale said.

Marziale said he has been blocked from any eviction proceedings against Toppins because city courts are closed.

“This is something that we feel could have been prevented if, in fact, the courts were open for evictions,” Marziale said.

While evictions for non-payment of rent have been halted due to the pandemic emergency, evictions for criminal behavior have been on hold for a different reason: because city courts are closed.

“If the courts were open, it could have been prevented one-hundred percent,” Marziale said.

He said there should be a way to get emergency evictions before a judge.

Ferguson on Tuesday did not describe the aggravated assault case for which Toppins was wanted. The chief did say police were aware that Toppins had a history of domestic violence but did not elaborate. Last Tuesday, two NOPD officers were shot near Morrison Road and Bullard Avenue around 9:15 p.m.

The shooting took place after the two patrol officers responded to a call of a car burglary in progress. The break-in at Briarheath and Strathmore drives was reported near an area where more than 40 car burglaries were reported at four apartment complexes last week. Neither officer sustained life-threatening injuries.

One of the officers, a 5-year veteran, sustained a gunshot wound to the kneecap that may require surgery, NOPD Superintendent Shaun Ferguson said in a press conference shortly after the shooting. The other officer, a 4-year veteran, was shot in the calf.