"How would you feel if you, or your child had received something like that? " 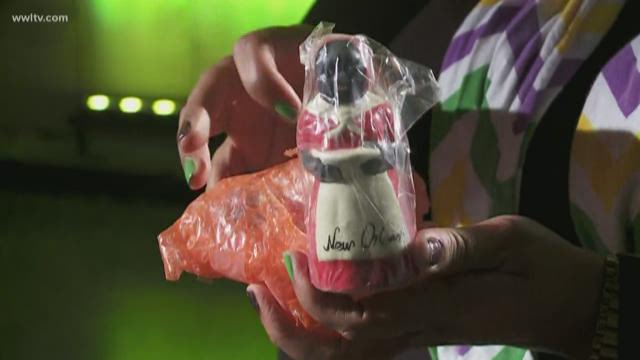 Shocked and appalled is the only way Cousin could describe her reaction after she says her 4-year-old son got Black face figurines during the Krewe of Endymion parade on Saturday.

Her son was propped up on her fiancee's shoulders off Canal Street when someone from a float handed him a bubbled wrapped package.

"Inside of the bubble wrap were two porcelain Blackfaced figures. One who the female figure looked like she possibly could've been a servant and holding a tray and the other was a male Blackfaced doll with a hat in his hand.

Cousin was not alone.

"As soon as he opened it, everybody just kind of got quiet," Rene Bond said.

Bond was with a group of friends, not too far from Cousin's location when her friend got the same throw. Bond couldn't help but feel hurt.

"Those were designed to make African American people and slaves sub-human. That was what they viewed us as. That's what they thought we were and that's all we were good for, was being servants. And ugly," Bond said.

When Gregory Hawkins got the package, he initially tried to make sense of it.

"I was searching my mind for like, an explanation. I thought maybe they were salt shakers or something. Or that this was some sort of historic thing for the Endymion crew specifically. But the more I thought about it, the more upset I became about it," Hawkins said.

Each of them posted the figurines on Facebook. That is how they found that it wasn't an isolated case. Multiple parade-goers shared other photos of the Black dolls. Bond, Cousin, and Hawkin's girlfriend Amanda Mendoza contacted the Krewe of Endymion directly on Facebook.

The Krewe responded to Amanda, asking for specifics on the float and riding position so that the incident can be investigated.

"They responded once or twice this morning, but they've kind of been dormant after I gave them like, exact details," Mendoza said.

"What would your message be to the people who did this and to those who think that this is okay? How would you feel if you, or your child had received something like that?" Cousin said.

Eyewitness News left a message with the Krewe of Endymion and are waiting to hear back.