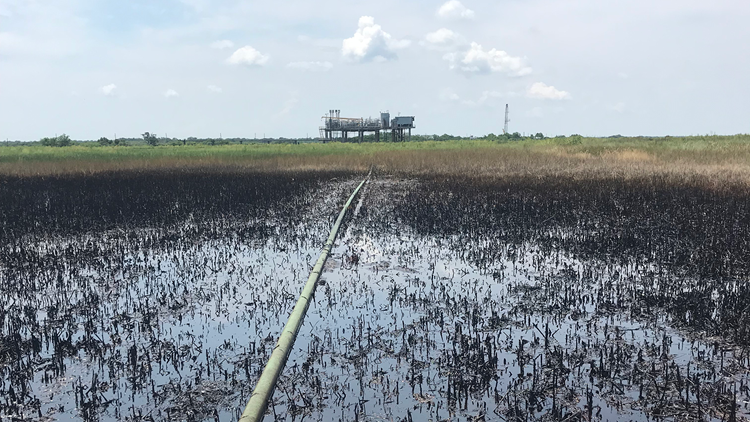 Photo by: U.S. Coast Guard
About 800 to 1,000 gallons of oil spilled last week from a Time Energy LLC flowline at Cox Bay in Plaquemines Parish. A flowline is a pipeline connecting a single well to a manifold or to production facilities.

1,000-gallon oil spill in Plaquemines Parish to be burned

NEW ORLEANS — The Coast Guard plans to burn off oil that spilled last week in a marsh about 42 miles south-southeast of New Orleans.

A news release said the burn will take place Wednesday if weather allows, or otherwise Thursday.

About 800 to 1,000 gallons of oil spilled last week from a Time Energy LLC flowline at Cox Bay in Plaquemines Parish, Petty Officer John Michelli said Tuesday. A flowline is a pipeline connecting a single well to a manifold or to production facilities.

The spill doesn't appear to have hurt wildlife, and key federal agencies agreed that a controlled burn was the best way to deal with the spill, according to a Coast Guard news release.

A unified command consisting of the Coast Guard, Louisiana Oil Spill Coordinator's Office, and Time Energy LLC schedules an in-situ burn to mitigate the impact of an oil discharge near Cox Bay, Louisiana, August 16, 2019. When conducted properly, in situ burning significantly reduces the amount of oil on the water and minimizes the adverse effect of the oil on the environment. (U.S. Coast Guard photo by Petty Officer 3rd Class Devin McMahan)
U.S. Coast Guard District 8

The Coast Guard said it was working with Time Energy and the Louisiana Oil Spill Coordinator's Office on the controlled burn, which was expected to start at 8 a.m. and last until 4 p.m.

Michelli said a firebreak would be dug around the area to ensure that the fire doesn't spread, and fire crews would be stationed around it.