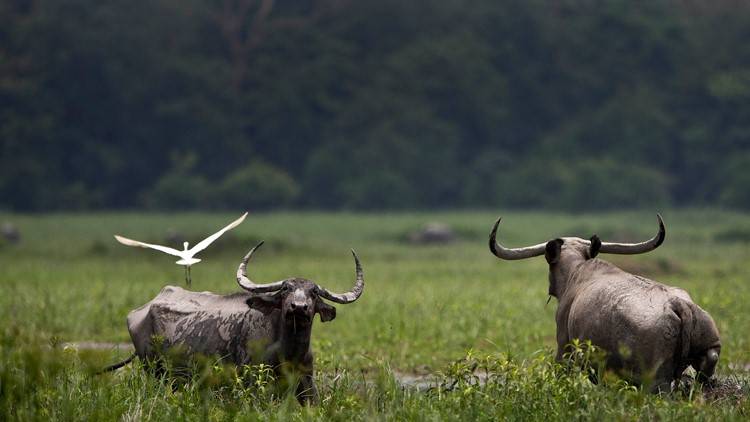 Photo by: AP
Asiatic water buffaloes graze at Pobitora wildlife sanctuary, about 60 kilometers east of Gauhati, India, Wednesday, May 23, 2018. The sanctuary has the highest density of the one-horned Rhinoceros in the world. (AP Photo/Anupam Nath)

Four men were arrested in connection to the killings, according to Mike Strain, the commissioner of the Louisiana Department of Agriculture and Forestry.

The alleged cattle rustlers are accused of shooting the foreign livestock then harvesting their meat and attempting to hide their heads. According to officials, the value of the two buffalo was about $10,000 in total.

According to Strain, social media posts from the suspects helped lead to their arrest during the Plaquemines Parish sheriff and LDAF's investigation.

30-year-old Andrew Crawford and 39-year-old Lance Siebert, both of unincorporated Braithwaite in Plaquemines Parish were arrested and booked for theft of livestock. 37-year-old Randall Siebert of Saint Bernard and 35-year-old Billy Johnson of Buras were booked with the same charge.

All four suspects were booked into the Plaquemines Parish Detention Center Friday by the LDAF's Livestock Brand Commission. Neither their bond amounts nor mugshots were immediately available electronically from the PPSO Saturday.

The punishment for theft of livestock in Louisiana is a fine of up to $5,000 or up to 10 years in prison.

No further information was immediately available from the LDAF. It was not immediately clear where the water buffalo were killed.