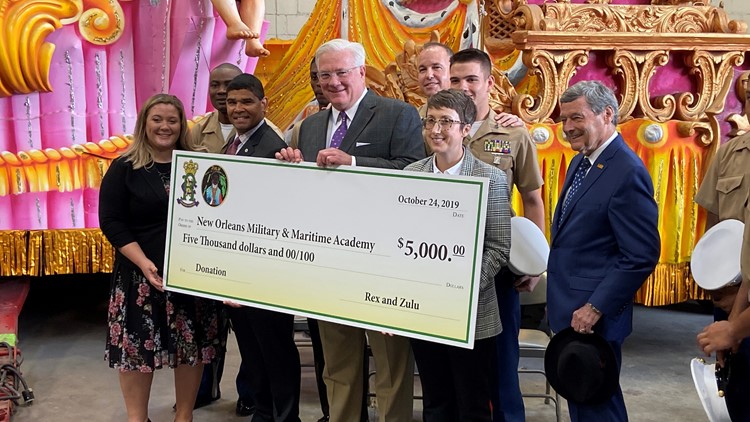 Photo by: WWL
Students and school leaders of New Orleans Military and Maritime Academy receive a $5,000 donation from Rex and Zulu krewe members on Thursday.

NEW ORLEANS — Almost four months to the day before their parades roll on Fat Tuesday 2020, members of two of the city’s premiere Carnival parades, Rex and Zulu, gathered Thursday to present thousands of dollars to two local schools.

Members of the Rex Organization and the Zulu Social Aid and Pleasure Club presented $5,000 checks to the New Orleans Military and Maritime Academy (NOMMA) and McDonogh 35 Senior High School. The money came from funds raised by the two organizations through krewe merchandise sales, dues and other donations.

This is the third year Rex and Zulu have partnered to make contributions to local education. Students from NOMMA and McDonogh 35 joined krewe members and school leaders at the Rex float den on S. Claiborne Ave. for the presentation.

Although Thursday’s donations were from the Rex Organization itself, Rex’s charitable arm, the Pro Bono Publico Foundation, also shares a similar mission. Since Hurricane Katrina it has given more than $7.5 million to local schools and educational groups.

Zulu has also had a charitable mission for decades, as the words “Social Aid” in its formal name suggest. Krewe officials said the partnership with Rex allows them to continue that investment.

McDonogh 35 Senior High School, which is run as a public charter school by InspireNOLA, is located in Gentilly. It was founded in 1917 as the first high school for African-American students.