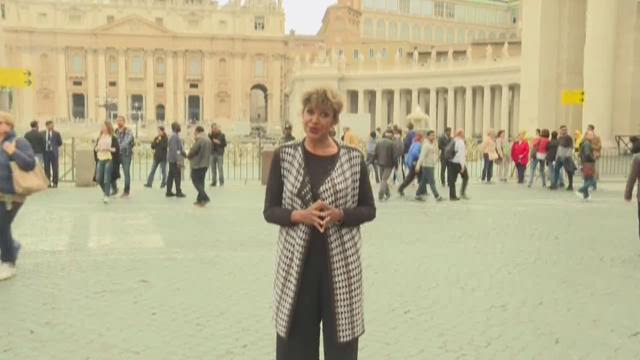 VATICAN -- Our own Sally-Ann Roberts is in Vatican City this week. Sally and her sister Robin Roberts are taking part in an international conference on stem cell research.

Created by The Stem For Life Foundation and the Vatican’s Pontifical Council For Culture, the third International Conference on the Progress of Regenerative Medicine, is an exclusive, international event where the world's leading Cell Therapy scientists will gather with physicians, patients, ethicists and leaders of faith, government and philanthropy to discuss the latest in cellular therapy.

Moderated by renowned journalists and broadcasted around the world, the 2016 event will have a unique focus on pediatric cancers and rare genetic diseases, as well as diseases that occur with aging.

Three years ago, Sally-Ann saved Robin's life when she donated her bone marrow to Robin when Robin's cancer returned.

"I am talking to you, Bill, because of this woman right here," Robin said of her sister Sally-Ann.

"Because she gave me her stem cells, and so she is going to be there with me at the Vatican. We're going to have an audience with the Pope, and just really have this discussion on what it takes to be a donor."

Even though some may find it controversial, Robin and Sally-Ann know first-hand how new technology can save lives.

"I know when you say stem cell and the Vatican, people wonder how do those two things go together," Robin said.

"It's wonderful that they want to bring and continue the dialogue and the importance of stem cell therapy, and especially in this case dealing with children."

Sally Ann said she wants people to know the importance of becoming a bone marrow donor and getting on the National Marrow Donor Registry.

"Robin is fortunate that she was able to find the match in her family, but there are so many others who are still waiting, and people are dying as they're waiting for a match," Sally-Ann said. "My role is also to take the fear out of it, because the donor doesn't go through the pain."

Another reason Sally-Ann and Robin are thrilled to be participating in the conference is the focus on how fast the technology is changing and improving.

"And there's nothing I could ever say over and over again, but thank you. Thanks you, and thank you for WWL and the 'Swabbin' For Robin' and getting people out and letting them know."