Gayle Benson, Drew Brees and other New Orleans Saints are at the ceremony in the nation's capital. 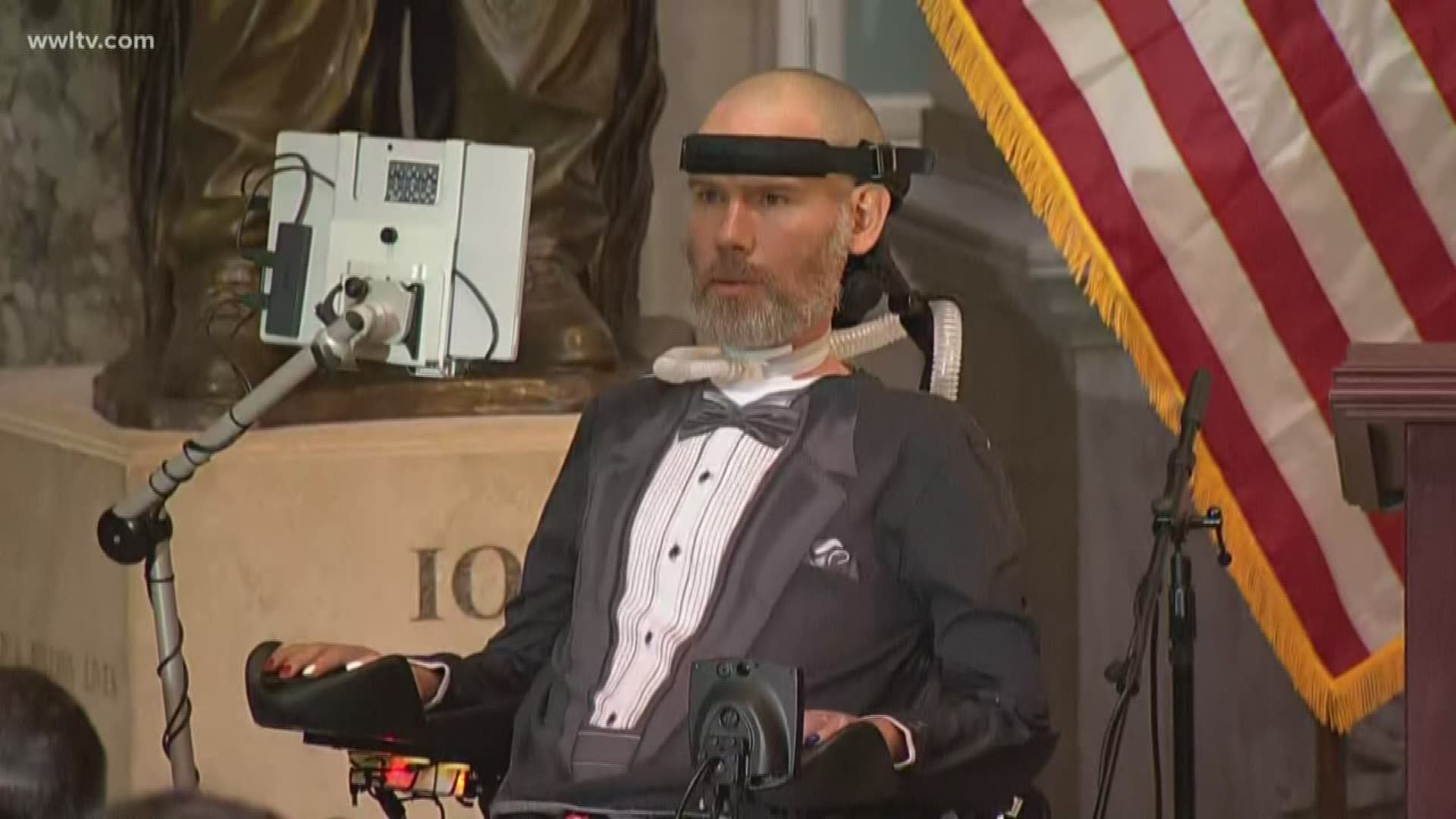 NEW ORLEANS — Steve Gleason is the latest recipient of the country's highest honor that can be given to an American civilian.

The former New Orleans Saints and current advocate for patients with Lou Gehrig's disease was bestowed the Congressional Gold Medal Wednesday during a special ceremony in the U.S. Capitol's National Sanctuary Hall.

Congressional representatives Nancy Pelosi, Mitch McConnell, Chuck Schumer, Steve Scalise, Cedric Richmond, Bill Cassidy and Kevin McCarthy all spoke at the ceremony and praised Gleason for his work in ALS awareness and research fundraising after his diagnosis in 2011.

After hearing their speeches and presentations from others, Gleason took the stage to accept the award. He gave a message of hope, compassion and possibility in a challenging future.

Gleason, 42, thanked his parents, wife and children for their support, calling his son and daughter a reason to live while facing today's problems.

"We as a country, and more appropriately, we as a global species face enormous challenges in the coming decades of the 21st Century," he said. "Challenges like exploring and colonizing other planets or thoughtfully solving climate change."

He cited the abilities genetic engineering and artificial intelligence to turn disabilities into "super abilities."

"It's clear to me that beyond the human capacity for imagination, our greatest strength as a species has been our ability to bravely share our weaknesses and vulnerabilities with each other," Gleason said.

Gleason ended by thanking the people of the United States for what he called the unbelievable honor.

Many New Orleanians know how heroic Gleason was during his eight seasons with the Saints, but his work since 2011, after being diagnosed ALS is what has earned him one of the highest honors America has for its civilians.

"There is no person on Earth with the strength, courage, passion and tenacity to overcome all obstacles and make a lasting impact that Steve has made. Steve, you're an inspiration, you're a source of strength to so many, especially me," Brees said.

It was Brees' 41st birthday and his son's 11th birthday. He called Gleason an American Hero and said there was no place he'd rather be.

Before the ceremony, Steve Gleason's father, Mike Gleason, tried to describe how proud he was of his son.

"To be perfectly honest with you," Mike said. "I'm not sure if it's really hit me yet."

Tom Capella, board member of Team Gleason, emphasized why the award will be so significant.

"He's the first ALS patient to ever receive the Congressional Gold Medal, and the first one who lives in Louisiana," Capella said. "It’s a really big deal, so I’m super excited for it. Not only for (Gleason), but for the whole ALS community that works so hard to fight this dreaded disease.”

In the years since establishing Team Gleason, the foundation has raised more than $10 million to help ALS patients live what is often referred to as purposeful lives.

Something that is perhaps more invaluable than the money raised by the organization is the awareness they created about a disease that robs people of their ability to walk, talk, and breathe.