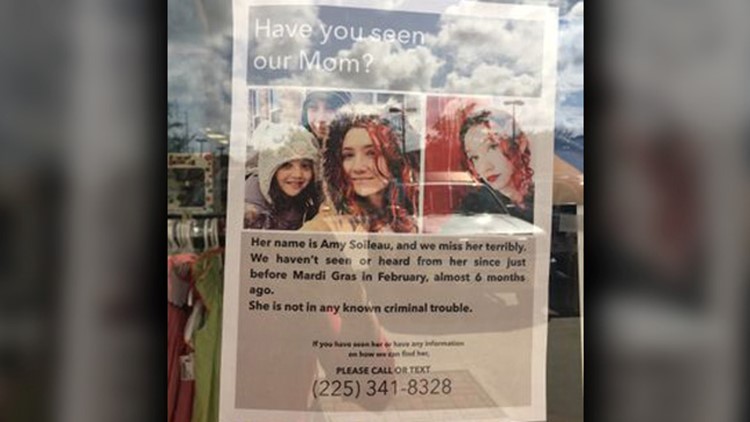 The mystery of a missing mother in Lafayette

Flyers posted in Lafayette are asking for information to help find Amy Soileau, a woman who has reportedly been missing since February.

According to her Facebook profile, Soileau is originally from Ville Platte. She graduated from high school in Baton Rouge in 2009. Then she spent several years at the University of New Orleans. She received bachelor’s and master’s degrees there, and worked as an assistant in the library and English department.

Most recently, Soileau’s profile lists her as an English teacher at Henry Ford Middle School in Jefferson Parish.

A school district spokesman said Soileau resigned in January after one week as a teacher at the school.

Charles Tate, Soileau’s stepfather, said he feared she began to suffer what appeared to be mental health issues around Mardi Gras. She received treatment for a few days, then disappeared and was not in contact with her family. She is married with two young children.

Tate said he and a niece saw and spoke to Soileau in Lafayette in April, during Festival International. Soileau appeared healthy and said she would soon reach out to her children. The family has not heard from her since.

“It’s been really traumatic on the kids,” Tate said. “They went from their mom tucking them in every night to no word from her. When all of this happened, it was so abrupt. There were multiple levels of shock.”

Tate said the family is still unsure why Soileau has not been in touch or what circumstances she may be living in. He said they have reached out to law enforcement, but were told that little could be done about the situation.