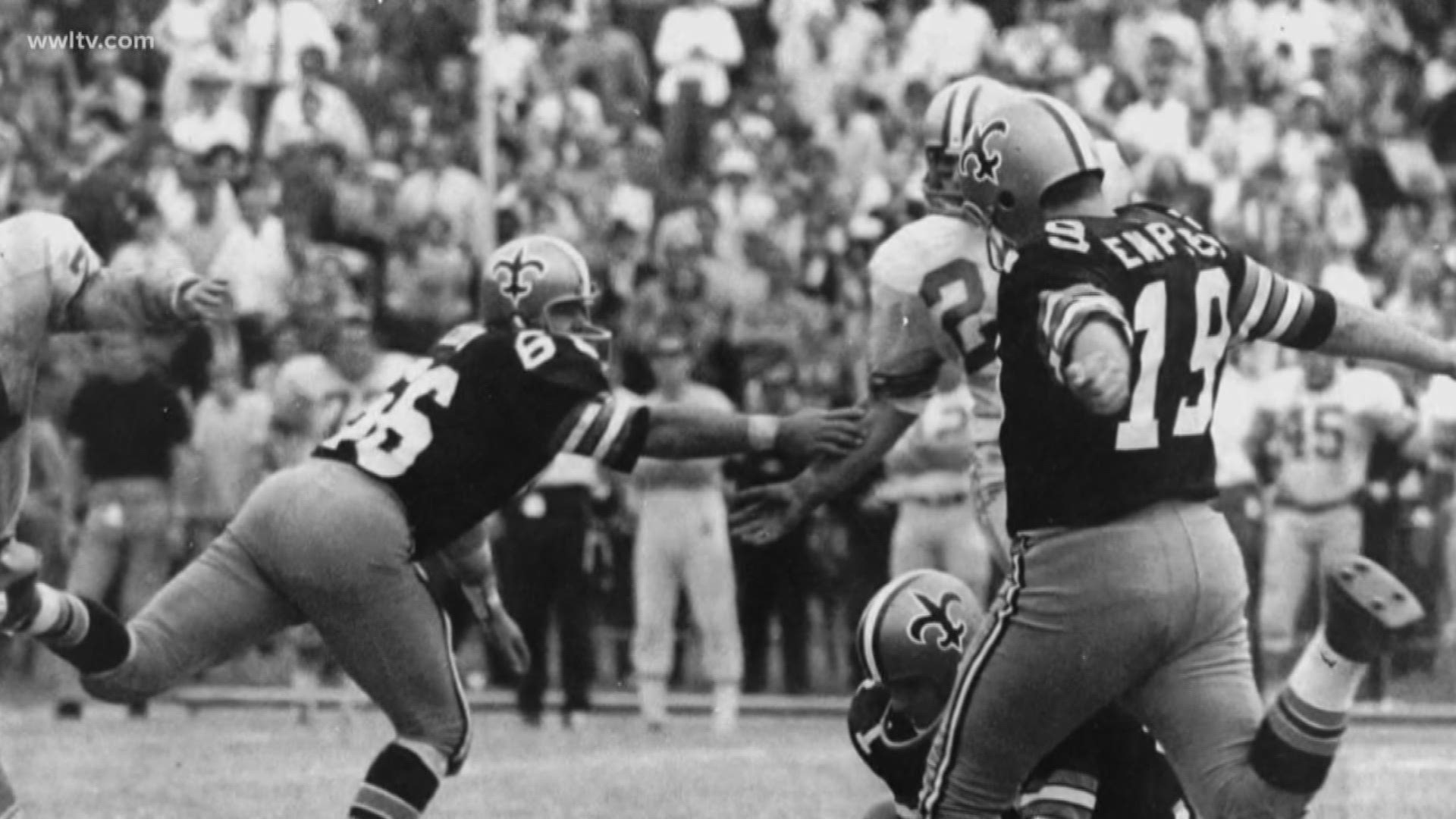 NEW ORLEANS — Tom Dempsey, the iconic New Orleans Saints placekicker who set an NFL field goal record that stood for more than four decades, died Saturday of complications from coronavirus, his family said. He was 73.

His death was first reported by Ramon Antonio Vargas of The Times-Picayune/New Orleans Advocate.

Last week, his daughter Ashley told the newspaper that Dempsey had contracted the coronavirus while living at Lambeth House, the Uptown care facility that has seen a cluster of COVID-19 cases and deaths. Dempsey had been receiving care at Lambeth House for dementia and Alzheimer’s disease.

On Nov. 8, 1970, Dempsey’s last-second, 63-yard field goal in the old Tulane Stadium earned the Saints a 19-17 win over the Detroit Lions. It also earned Dempsey a page in Saints history.

“They called down and said, ‘Tell Stumpy (his nickname) to get ready. We're going to kick a long field goal.’ I don't think they planned on making it a 63-yard field goal,” Dempsey recalled to former WWL-TV sports director Jim Henderson in 2010.

“I had confidence I could kick the ball 62 yards,” Dempsey said after the game in 1970, “But I was wondering whether I could kick it straight 62 or 63 yards, whatever it was. You have to kick the ball as hard as you possibly can, but yet try to hit it square and that's kind of a hard job really.”

It was a job made even harder by the fact that a birth defect left Dempsey born without toes on his right foot and missing fingers on his right hand. He used a custom-built shoe to kick the ball. The shoe would later lead some in the NFL – including Dallas Cowboys general manager Tex Schramm - to question the historic kick’s legitimacy.

“He said I had an advantage because I didn’t have any toes. I said, ‘God, when I miss them, how come I don’t have a disadvantage?’” Dempsey said in 2010.

The NFL later verified Dempsey’s record and the modified shoe he kicked with is now on display at the Pro Football Hall of Fame in Canton, Ohio.

In the 2010 WWL-TV interview, Dempsey said he tried never to let his physical limitations stop him. “I was very fortunate. My dad had a lot to do with that. He said, ‘Boy you never say can’t. You may have to do it differently, but you can do it.’”

Dempsey’s 1970 kick set a distance record which several other players would match, but none would surpass until December 2013 when Denver Broncos kicker Matt Prater beat the mark by a single yard – in Denver, in 14-degree weather.

By that time, Dempsey was suffering from Alzheimer’s and was unable to share his reaction to the record being broken.

“It wouldn’t have bothered him,” his daughter Ashley Dempsey told The Times-Picayune. “When Jason Elam tied it in 1999, my dad sent him an e-mail congratulating him. It always special to him that when he broke the record, he got a telegram from the kicker who had it (Bert Rechichar), so he would have been cheering for him (Prater) to do it.”

“Dad always figured if somebody beat it, it would happen in Denver,” Ashley Dempsey said at the time. “But he said, ‘I’ll always have the record for below sea level.’”

Tom Dempsey was born in Milwaukee and grew up in California, playing football at Palomar College in San Diego. He joined the Saints in 1969 and earned a Pro Bowl selection and All-Pro honors as a rookie.

He played just two seasons with the Saints before being cut by the team in 1971. Dempsey went on to play for four other NFL teams - the Eagles, the Rams, the Oilers and the Bills – before retiring in 1979.

In retirement, Dempsey returned to New Orleans with his wife Carlene and their three children. He worked as a salesman, even managing one of Saints owner Tom Benson’s car dealerships. Dempsey also coached football at Archbishop Rummel High School and at Jefferson Parish playgrounds.

He was inducted into the New Orleans Saints Hall of Fame in 1989.