For more than a decade, the site has been vacant with no clear plans for its future in sight. 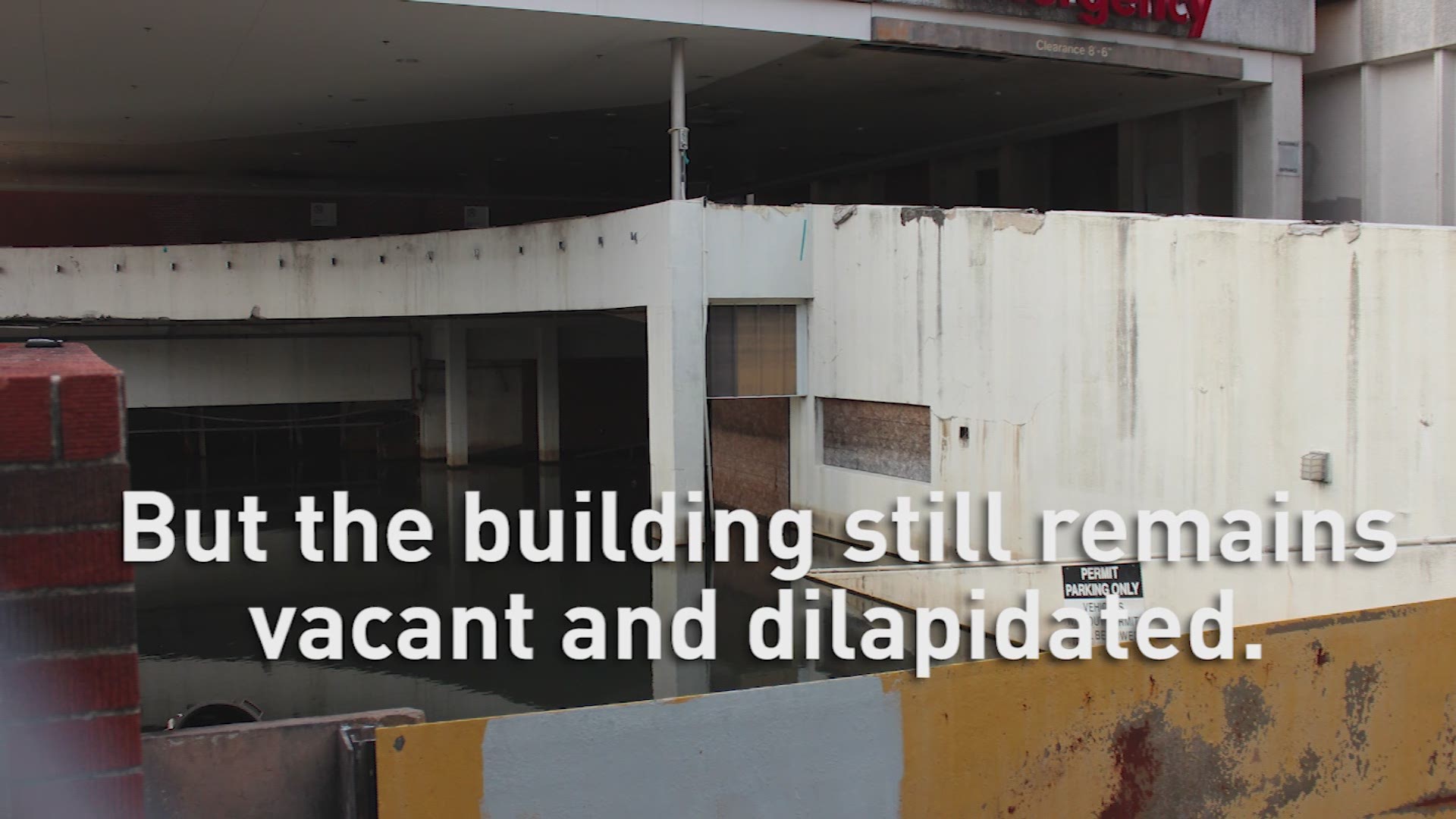 NEW ORLEANS -- In the middle of a Mid-City boom sits a major bust.

Just off the Lafitte Greenway and steps away from other new developments sits the former Lindy Boggs Medical Center, vacant and crumbling for almost 13 years.

That area of Mid-City has seen developments in the past few years, just feet away from the Lindy Boggs building, some including, the 2.6 mile-long Lafitte Greenway, Camp Bow Wow around the corner on Conti Street, Bayou Wine and Beer Garden just on the other side of Jefferson Davis, and Neyow’s Creole Café an eye shot away across the street from the building. Yet, the building continues to sit dilapidated.

Currently, the building has a fence surrounding the property and the windows and doors are boarded up, however some boards seem to have either fallen off or have been broken. As recently as Thursday, June 21, water could be seen on the lower level ramp near what used to be the emergency drop off area when the hospital was in operation and a haven for mosquitoes just waiting to breed. Trash can also be seen cluttered around the fence, a chair stuck in one of the main trees surrounding the building and a utility pole weighing down a part of the fence that nearly dangles over the sidewalk

Plans for its future remain as stagnant as the water that fills its lower level, frustrating neighbors who said they have been let down by lack of a new life for the old hospital.

“The frustration bubbles up. We are not happy that this is still sitting empty,” said Mid-City Neighborhood Organization President Emily Leitzinger. “We would really like some sort of answer.”

Any answer, though, is hard to come by.

The building at North Jefferson Davis Parkway and Bienville Avenue is owned by the St. Margaret’s Foundation, according to Orleans Parish Assessor’s Office records. MCC Real Estate, a New Orleans-based real estate and development company, has been brought on as a partner.

Leitzinger said an agent from MCC told the Mid-City Neighborhood Organization at a meeting last year that he wanted input from neighbors as to what they wanted to see developed at the site.

“The room was a little stunned,” Leitzinger said. “I personally have a hard time believing that a developer would … not have any idea what they want to do.”

She said that neighbors felt there was already an idea in place for the property.

Leitzinger said she was in contact with MCC in May to see if any progress had been made since the neighborhood meeting last year.

She said the response she got was that the property had been cleared of asbestos and debris and MCC was investigating the possibility of an assisted-living facility while also exploring HUD financing to help cover the cost of the project.

When she asked about a timeline of potential redevelopment, MCC did not have one.

Attempts by WWL-TV to reach St. Margaret’s have been unsuccessful. MCC declined to comment.

Robert Rivers, executive director of New Orleans’ City Planning Commission, said no plans for redevelopment of the site have been filed with his office.

“We have no records of any applications for redevelopment permits with either the City Planning Commission or the Department of Safety and Permits,” Rivers stated in an email.

Hurricane Katrina forced the hospital to close, and St. Margaret’s bought the five-story building in 2010 for $4.2 million, according to assessor’s records.

A 2013 lawsuit between St. Margaret’s and MCC stalled one proposed redevelopment.

The lawsuit alleged that there were plans to develop a cardiovascular hospital at the property with LSU. Those plans, however, fell through when the state pulled out and decided to focus its full resources on University Medical Center.

MCC alleged in the lawsuit that although plans with LSU fell through, they still had a partnership with St. Margaret’s to redevelop the site. St. Margaret’s alleged that when those plans were no longer on the table, MCC no longer had those obligations.

The lawsuit has since been settled, but the building remains untouched.

'A RANGE OF OPPORTUNITIES’

Otte said that the RPC does not have specifics on the plans for the site’s redevelopment since that agency is limited to assisting with environmental issues.

The site sits in Council member Jay Banks’ district. Banks’ Chief of Staff, Jarvis Lewis, confirmed that no updated plans for the site have come through the office.

Banks did not respond to a request for comment.

LaToya Cantrell represented the district until she was sworn in as mayor in May. Her spokesman said Cantrell is hopeful the environmental remediation will spur some activity.

“Given the size of the site and the rezoning, the developers have a range of opportunities,” Beau Tidwell, her spokesman, said.

“We hope that the owners will carefully consider the needs of the surrounding community in their planning process and contribute to the surrounding amenities like the Greenway,” Tidwell continued.

“The mayor also wants to see multi-family housing as part of the final plan.”

Executive Director of Friends of Lafitte Greenway Sophie Harris Vorhoff said she wants to see the site redeveloped into something that supports what the Greenway has to offer.

“Friends of Lafitte Greenway is interested in seeing vacant and underutilized building (sic) along the Greenway revitalized and and (sic) redeveloped to support the core principles of equity, active living, safety, environmental resilience, place-making, and community,” Harris Vorhoff said.

DEVELOPER NO STRANGER TO LARGE PROJECTS

MCC has developed several projects around New Orleans, including Mardi Gras World, the Joy Theater, and slew of office buildings and hotels.

The group recently reopened the Jung Hotel on Canal Street, and MCC’s CEO Joe Jaeger, who also a part of 3800 Howard Investors LLC, recently bought the former Times-Picayune building in September with float builder Barry Kern. Plans for the former newspaper plant call for it to be torn down and a driving range built in its place.

“My fear, honestly, is that the Times-Picayune building is going to get preferential timeline treatment over (Lindy Boggs), because how many years since Katrina now?” Leitzinger with the Mid-City Neighborhood Organization asked. “Thirteen years past Katrina, and nothing is moving on it.”

Alicia Serrano can be reached at aserrano@wwltv.com.