This comes after 'Live PD' said raw, unaired video footage of the deadly encounter was destroyed. 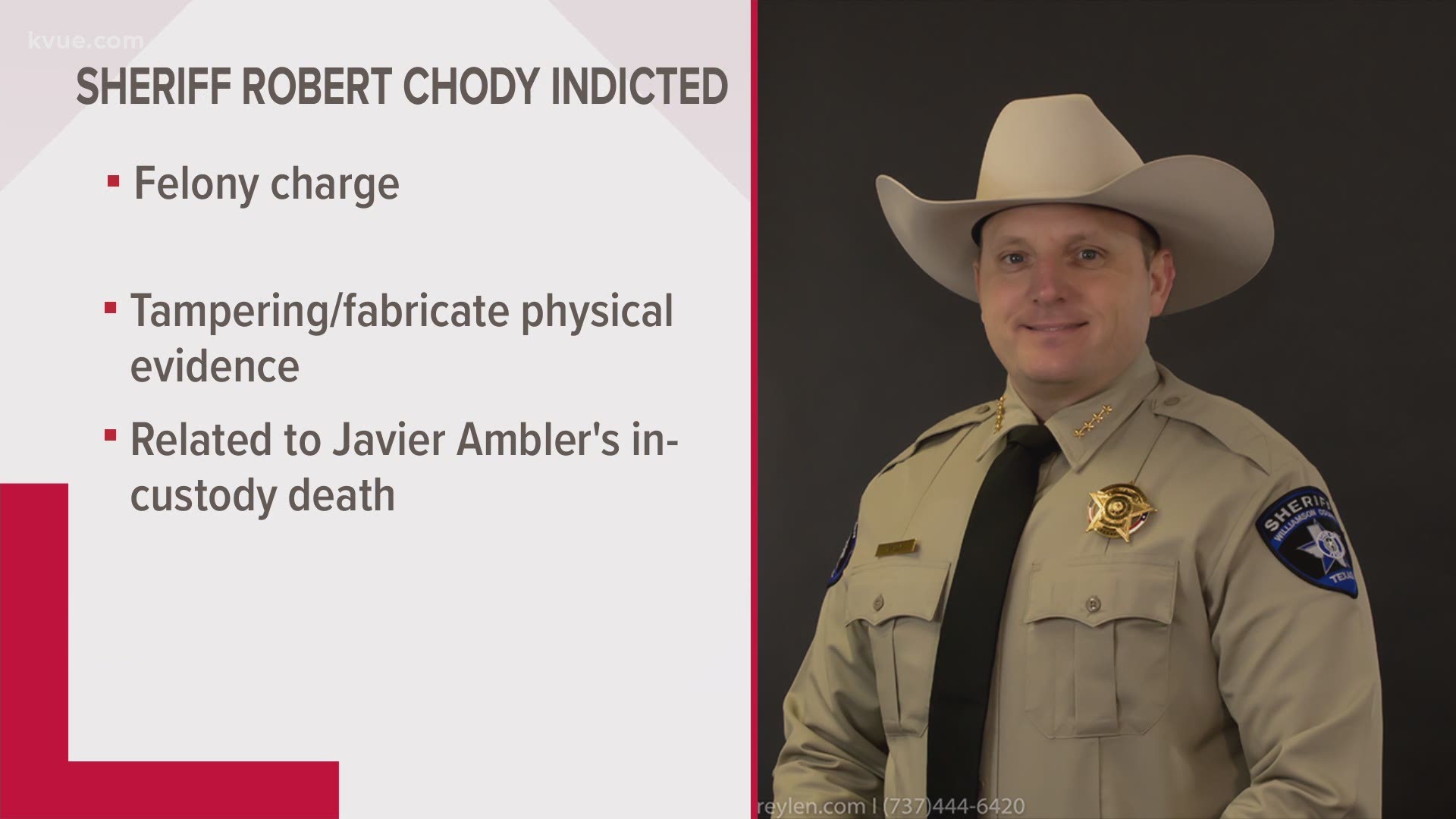 WILLIAMSON COUNTY, Texas — A Williamson County grand jury has indicted Sheriff Robert Chody on a charge related to the death of Javier Ambler in March 2019.

Jail records show that Chody was booked in the Williamson County Jail on Sept. 28. He has since been released after posting a $10,000 bond.

Sheriff Robert Chody has been indicted on a felony charge. Does he get to keep his job?

The investigation came after the KVUE Defenders and the Austin American-Statesman jointly reported details of Ambler's death in June and "Live PD" confirmed that raw, unaired video footage of the encounter was destroyed.

Williamson County Deputies J.J. Johnson and Zach Camden chased Ambler for 22 minutes in a pursuit that began after Ambler failed to dim his headlights.

The chase ended in North Austin, where the deputies used Tasers on Ambler as he shouted that he had a heart condition and could not breathe.

After the reports, "Live PD" producers said that sheriff's officials asked that they preserve the video but informed them two months later that the investigation was completed using body camera footage and dash camera video.

At the time, investigators from the Austin Police Department and the Travis County District Attorney's civil rights division were still trying to obtain copies of the footage, officials have said.

Moore, who will leave office in December, has said that the next district attorney in Travis County will determine how to proceed in the investigation into whether Johnson and Camden used excessive force.

Under Texas law, public officials can remain in office if charged with a crime but may be removed if they are convicted. Chody is on the ballot in the Nov. 3 general election with a Democratic opponent, retired sheriff's official Mike Gleason.

"I honorably served Williamson County for 24 years before retiring as Assistant Chief Deputy just prior to when Chody took office," Gleason said Monday. "The people of Williamson County put their hope and trust in Robert Chody to uphold the law and keep the peace. Today's indictment shattered that trust. I will restore it if elected to the Sheriff's Office in November."

Both Dick and Moore, as well as Chody, addressed the indictment in separate press conferences Monday afternoon. Dick told the media he was bound by law to take the issue to a grand jury and said jurors heard from 19 witnesses. Dick said the offenses carry up to 10 years behind bars, and Nov. 30 is the first court date for Nassour and Chody.

Regarding the timing of the indictment, Dick said it was largely based on information investigators learned in June 2020.

"I thought long and hard about timing," Dick said. "You have to do what is right according to the law ...The timing isn’t chosen."

Additionally, Moore said a Travis County grand jury will consider additional tampering charges in Travis County. The same grand jury will hear evidence in Ambler’s death in 2021. Dick said the jury will be enpaneled the third week in October to hear the evidence related to the "Live PD" footage and the use of force.

Minutes after the DAs' press conference ended, Chody and his lawyer vehemently denied tampering with any evidence. Chody's lawyer said videos would show that his deputies "did nothing wrong," that Chody had no interest in concealing evidence, and that to say that the video that was destroyed was critical evidence is "baloney."

Chody also said the "Live PD" video was not critical as Moore claims. He said there is ample evidence from body-worn cameras, chopper video and dashcam video that show the deputies did nothing wrong in the Ambler incident.

Chody said the indictment is a result of Dick and Moore using the situation as political capital. Chody said this indictment is not his first run-in with Dick, citing a time when a campaign volunteer placed a sign at the wrong home. Chody said Dick planned to handle the complaint by giving it to the Texas Rangers and he was being vindictive.

In terms of Moore's involvement, Chody questioned why prosecutors did not reach out to him for video and claimed Moore blamed him in a strategy to save herself in her re-election campaign. Moore was ultimately defeated by her Democratic opponent Jose Garza earlier this year, who will now face Republican Martin Harry in November.

When asked if he planned to step down as sheriff amid the indictment and impending trial, Chody responded, "Absolutely not."

Jeff Edwards of the Edwards Law Group, who is representing the Ambler family, released the following statement Monday evening:

"Today, we learned that a reason for the slow pace of justice in this case is that Sheriff Chody allegedly acted to destroy video evidence of Mr. Ambler’s death. It seems the sheriff was more interested in being part of a reality television program and providing entertaining video content than protecting the lives of the Black citizens he was sworn to protect. If true, such shameful behavior by a law enforcement leader is striking evidence that there needs to be a sweeping, systemic overhaul of our system of policing."

Monday evening, KVUE aired a special report regarding Chody's indictment, as well as previous controversies related to the WCSO. Watch it here or below: