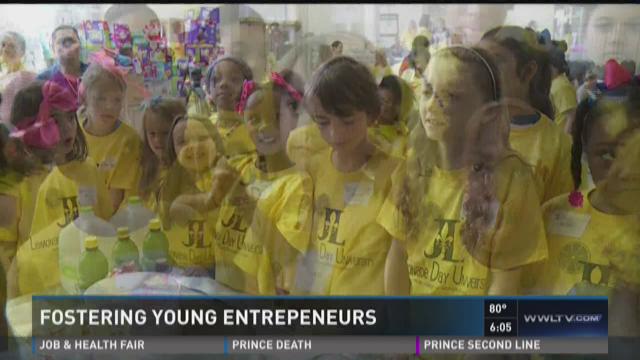 NEW ORLEANS -- Saturday dozens of entrepreneurs prepped for their big opportunity to learn about running a business and giving back.

The whole idea of Lemonade Day Louisiana is to send a little, save a little and share a little. That message was imparted to kids Uptown, waiting with bright eyes and big plans.

"I learned that it's fun to make lemonade and it's good and healthy," said one young boy.

They were drinking it all in.

"I really wanted a hoverboard, that's why I'm here to make a lemonade stand; to save up for a hoverboard," said another young girl.

Lemonade Day Louisiana is coming April 30, but before these kids set up their stands they must first learn how to build a business. It's something they can learn through Lemonade University, where kids learned about things like planning and marketing.

The Junior League of New Orleans has been hosting a the free seminar for several years, with the goal of fostering young entrepreneurs.

"With the spirit of giving back, because that's what the Junior League is all about,” said Shannon Able with the Junior League of New Orleans. “Promoting volunteerism, creating future leaders and improving our community. So this helps them learn at a young age."

As part of the training, kids got the chance to come up with their own business plan. Lester Arnaud has been working on his ever since he inherited the family lemonade stand from his sisters.

"Advertising is first on social media,” said Arnaud. “Since they don't give me any money, we decided to do a competition-boys versus girls,” said Arnaud.

Members of the Junior League hope the lessons will last long after the lemonade stands come down.

"Lemonade Day is really more than just that day,” said Arnauds’ mother, Idell. “The planning is just the initiative. You want them to pick up the business side of it. I believe he is my future business leader so we invested the time to come out here today."

Fifty kids received their Lemonade Day certification. Seeing yellow, to make some green, and give back to those in need along the way.

This year is the sixth anniversary of Lemonade Day Louisiana. 20,000 kids are expected to participate across the state.