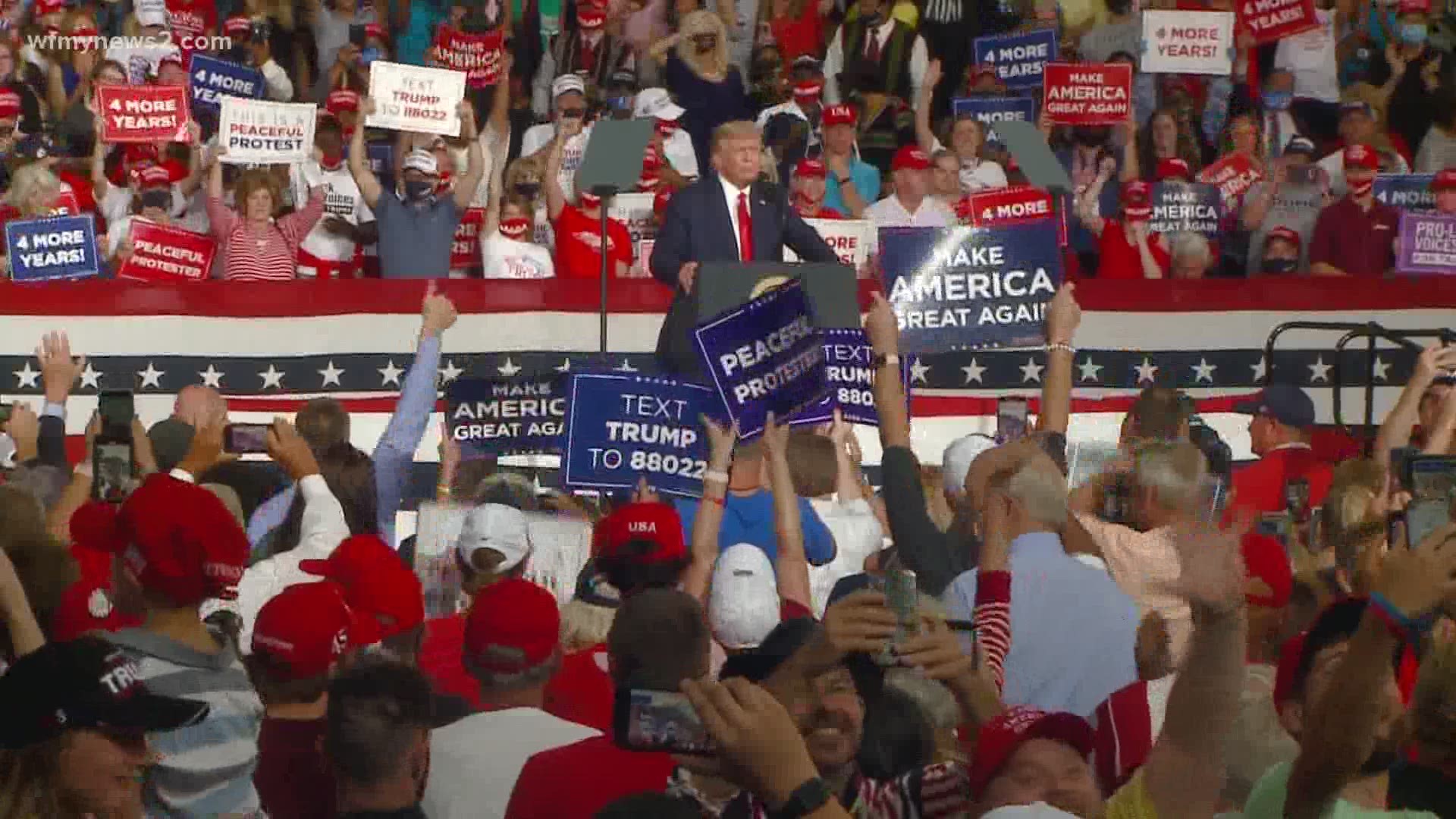 President Trump said the upcoming election is the “most important election we’ve ever had.”

“If Biden wins, China wins and it’s as simple as that.”

Trump also spoke out against the closing of North Carolina.

“We built the greatest economy in the history of the world. We were forced to close it because of the China plague that came in and now we’ve opened it and by the way, your state should be open. It should be open.”

When talking about restrictions on businesses due to the coronavirus pandemic Trump said, "You ought to vote for Dan Forest."

"We call you peaceful protesters," Trump told supporters while referring to his campaign's strategy of getting around bans on large gatherings.

Winston-Salem Mayor Allen Joines said his office was not in touch with the Trump campaign but hoped the event would comply with the governor's executive order.

However, there was a large crowd at the Trump campaign rally. Those entering the rally were required to get their temperature checked. Some supporters also had on face masks at the rally.

RELATED: What roads will close for President Trump’s visit to Winston-Salem?

Everyone is required to get their temperature checked at @realDonaldTrump’s campaign rally in Winston-Salem @WFMY pic.twitter.com/AtZ5V8FtLC

There was also a protest held outside the campaign rally in opposition to the event and President Trump's visit to the Triad.

Democratic presidential nominee Joe Biden also held a North Carolina-focused event Tuesday night. His was a virtual event. The message was all about voting early. Former candidate for Georgia Governor Stacey Abrams spoke.
So did North Carolina senators Gladys Robinson and Jeff Jackson.
Biden himself did not speak at the event.

In the past week, nearly 10,000 positive COVID-19 cases have been reported in North Carolina and close to 200 North Carolinians have died due to the virus. Since the middle of March, more than 1.2 million North Carolinians have filed for unemployment benefits, and the state’s unemployment rate shot up in July to nearly double what it was last year. Yet today, North Carolinians will not hear President Trump discuss how he plans to get this virus under control, nor will they hear plans to safely restart our economy or provide much-needed relief to struggling workers, parents, and small business owners.

President Trump’s mismanagement has cost too many North Carolinians their lives and livelihoods, with communities of color bearing the brunt of the devastation. He has looked away from North Carolinians in need of a lifeline, even as his wealthy corporate donors get ahead.

As President, I will fight for your family like it’s my own. I will bring our country together to defeat this pandemic and build our economy back better so that it works for all North Carolinians and leaves no one behind.