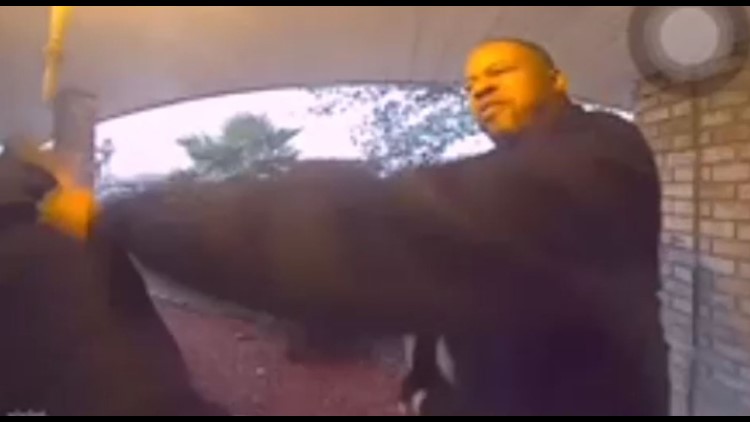 NEW ORLEANS — No matter how many times Quishandra Walker watches the video, she cannot believe it.

"I'd just like to see justice, cause it's wrong. There's ways you can go around talking to a child without cursing them out. Calling them all kinds of names," Walker said.

In the video, you can hear two social workers with Empowerment Behavioral Services cursing at a 13-year-old boy.

Walker says the incident happened on Dec. 29 at the home of the boys' aunt.

The counselor on the left and his supervisor on the right of the video had an appointment with the teen. When Walker's son tried entering the house, the men apparently said no.

"My little sister called me. She was at work and she was screaming and hollering like 'Who is those men that see your son?' And I was like, that's his counselor," Walker said.

That's when the argument began.

Walker says when the boy rolled his eyes, the supervisor lost it.

Walker claims when she called the department, she found out that the supervisor was not even licensed.

"The man called me like maybe four days later. He was like, he apologized. He's going to look into and this and that, but I never got nothing else," Walker said.

Juan LaFonta is the family's attorney.

"We've put in a formal complaint. We have a petition drafted. We are going to file suit and we're gonna get justice for this kid," LaFonta said.

LaFonta says he's reached out to social workers and others in the outreach community. He's also reached out to the Department of Health and Hospitals.

"When you see all of that happen to a young Black male and you look at what's happening in the city of New Orleans, you look at how bad off we have it now and the obstacles they have to face, we don't need to have the people that's suppose to be helping people do this kind of stuff to kids," LaFonta said.

Eyewitness News reached out to the company, but they told us that they cannot comment because this is pending litigation.

"They don't need to be working in that field! Because if you're doing it to my child, you're probably doing it to other children," Walker said.

In addition to the cursing and the hitting Walker alleges that the Supervisor called for his 17-year-old son who was in a truck parked outside of the home to come and deal with her son if he didn't submit to their demands.

Walker says she did file a police report and child abuse detectives are suppose to be getting in contact with her, but they have not so far.