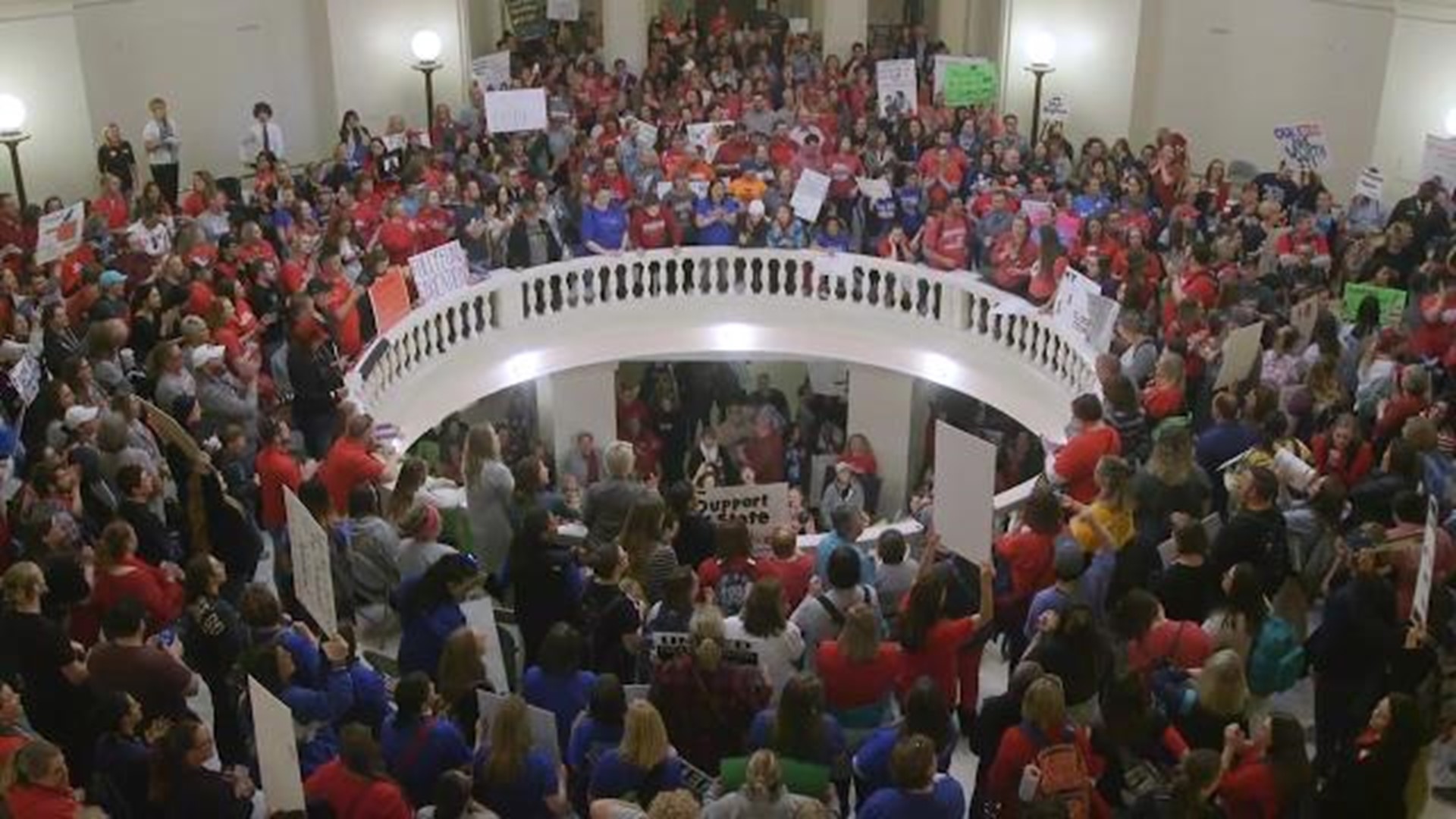 Credit: DAVID WALLACE/USA TODAY NETWORK
Teachers fill the inside of the Oklahoma state capitol as they rally on the second day of the teachers walkout in Oklahoma City, April 3, 2018.

Oklahoma teachers won raises last week averaging 16%, or $6,100 — the first pay increase for some educators in a decade — under legislation signed by Republican Gov. Mary Fallin.

But that wasn’t enough to prevent a walkout that brought about 20,000 teachers, students and other supporters to the Oklahoma Capitol. The strike closed the 10 largest school districts in the state, with at least 234,000 students combined.

“If I didn’t have a second job, I’d be on food stamps,” said Rae Lovelace, a third-grade teacher and single mother in northwest Oklahoma who works 30 to 40 hours a week at a second job.

Teachers are also pushing to restore state education funding to pre-recession levels — which would require its governor and Legislature to reinvest nearly $1 billion more annually.

"We are hopeful that our legislators will continue working this afternoon toward a solution, but we wanted to make this decision as early as possible to give our families adequate time to plan," the school district said in a statement.

Classes are cancelled again tomorrow, Wednesday, April 4, 2018. We are hopeful that our legislators will continue working this afternoon toward a solution, but we wanted to make this decision as early as possible to give our families adequate time to plan. #oklaed pic.twitter.com/qjmVMjqgQ8

Thousands of people outside the state Capitol were focused Tuesday on getting inside the building to fulfill the Oklahoma Education Association’s pledge to pack the rotunda.

By 10 a.m. so many people were inside the Capitol that troopers denied access above the first floor, letting people into the building only after others exited. The building’s capacity is around 1,000 people.

Before the crowds thinned out about 1:30 p.m., students, administrators, parents, support staff and teachers cheered in turn, with the cohort of teachers screaming the loudest. "This is our house," chanted people jamming three floors.

“I try not to cry because it’s been a long time coming," said Kimberly Miller, who teaches at Santa Fe High School in Edmond. "We’ve gone without textbooks; I’m a science teacher, and I go without proper equipment for labs. I’m happy people are finally seeing the reality.”

Teachers protest around the country

1 / 7
Michael Clevenger, Louisville Courier Journal, via USA TODAY NETWORK
Thousands of Kentucky teachers and their supporters rallied at the state Capitol over recent changes that the state legislature made to their pensions on April 2, 2018 in Frankfort, Ky.

Robert Poolaw and Holliebe Collins, who both teach at Thelma R. Parks Elementary School in Oklahoma City, lamented the lack of special education teachers and minority teachers across the state. The best teachers leave to make more money in other states, they said.

“Our kids get music for 20 minutes, one time a week,” Poolaw added.

Collins and Poolaw said they know they’ll get paid for up to four days of protesting but aren’t sure if they’ll have to use paid time off if the strike goes beyond that.

“If it takes all school year, we’ve gotta be prepared to do it,” Collins said.

Fallin warned Monday that the state budget was tight and that there are other priorities besides education.

“We must be responsible not to neglect other areas of need in the state such as corrections and health and human services as we continue to consider additional education funding measures,” Fallin said.

I appreciate teachers coming to the Capitol today. During the past three years, I have called for an increase in teacher salaries, and was proud to join with leaders of both parties last week to sign the largest teacher pay raise in state history. https://t.co/UADqe4YYyG

Oklahoma’s average teacher salary of $45,276 ranked 49th among states and the District of Columbia before the raises, according to the National Education Association. The state also ranked 47th in public school revenue per student, according to the teachers’ union.

With the schools closed, parents scrambled to place their children elsewhere. The state's largest district, Oklahoma City Public Schools, is providing free meals at more than 100 locations for anyone 18 and younger. Churches and organizations such as the Boys and Girls Club and Girl Scouts are offering day care or camp-style accommodations.

Credit: DAVID WALLACE/USA TODAY NETWORK
Kim McCreery a seventh grade English teacher in Tecumseh, Okla., holds her daughter, Keira McCreery, 5, as they rally with other teachers inside of the Oklahoma state capitol on the second day of the Oklahoma teachers walkout, at the capitol in Oklahoma City April 3, 2018.

The walkouts come less than a month after teachers in West Virginia ended a nine-day strike that shuttered schools there and less than a week after thousands of Arizona teachers rallied to demand a 20% pay increase.

Kentucky schools were closed Monday after teachers and other school workers went on strike, with thousands flooding the state capitol, chanting “Stop the war on public education.” Kentucky lawmakers are debating a new state budget with higher spending for public education, paid by a 6% sales tax on services that were previously tax free.

“We’re madder than hornets, and the hornets are swarming today,” said Claudette Green, a retired teacher and principal.