A review of legal claims shows taxpayers could be on the hook for more than $200 million in damages. 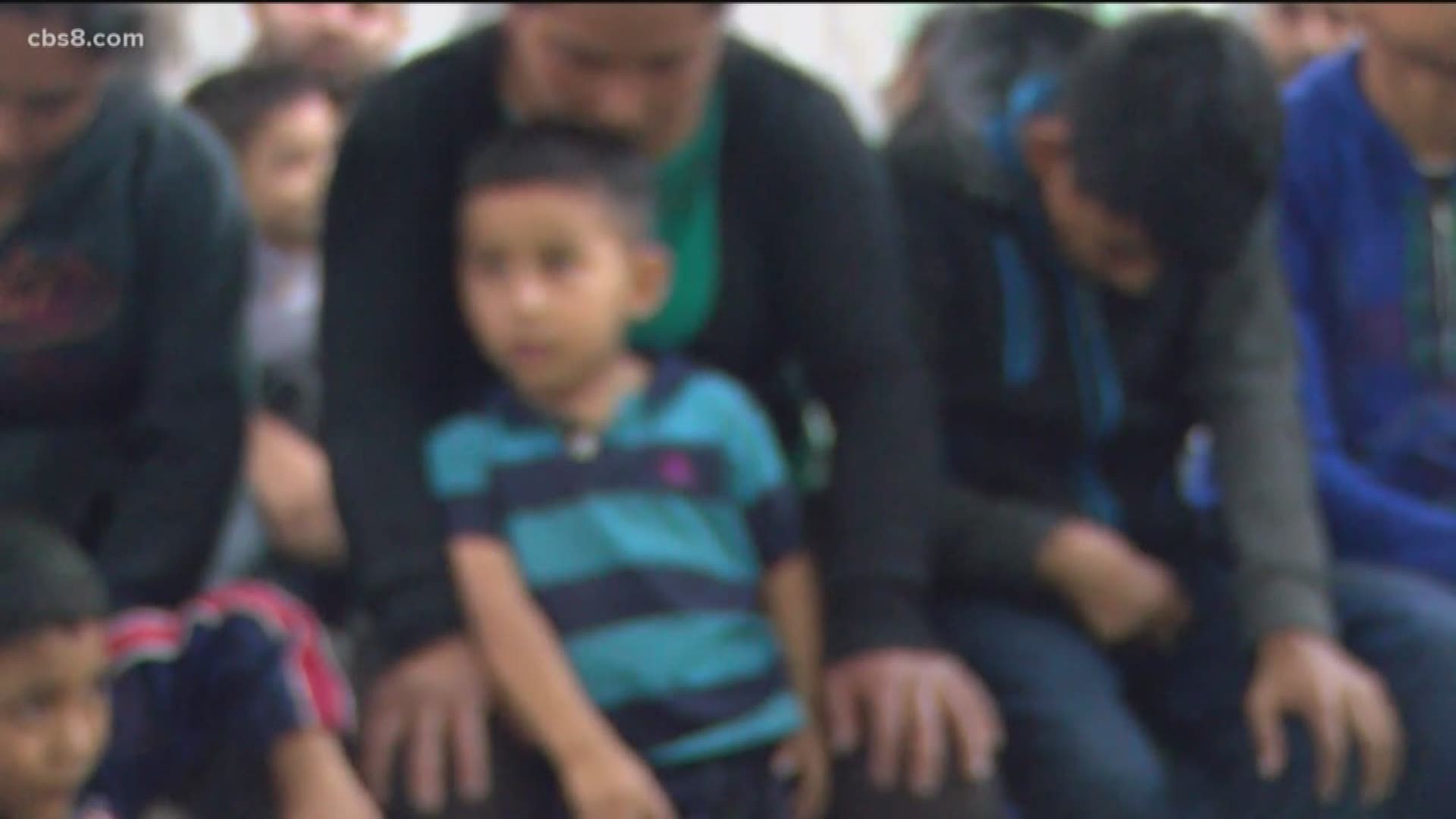 SANTA ANA, Calif. — (AP) — This story is part of an ongoing joint investigation between The Associated Press and the PBS series FRONTLINE on the treatment of migrant children, which includes an upcoming film.

After local Guatemalan officials burned down an environmental activist's home, he decided to leave his village behind and flee to the United States, hoping he'd be granted asylum and his little boy, whose heart was failing, would receive lifesaving medical care.

But after crossing the border into Arizona in May of last year, Border Patrol agents tore the man's 7-year-old son from his arms and sent the father nearly 2,000 miles (3,220 kilometers) away to a detention center in Georgia. The boy, now 8, went into a U.S.-funded foster home for migrant children in New York.

The foster care programs are meant to provide migrant children with care while authorities work to connect them with parents, relatives or other sponsors. But instead the boy told a counselor he was repeatedly sexually molested by other boys in the foster home.

A review of 38 legal claims obtained by The Associated Press — some of which have never been made public — shows taxpayers could be on the hook for more than $200 million in damages from parents who said their children were harmed while in government custody.

The father and son are among dozens of families — separated at the border as part of the Trump administration's zero tolerance policy — who are now preparing to sue the federal government, including several who say their young children were sexually, physically or emotionally abused in federally funded foster care.

With more than 3,000 migrant children taken from their parents at the border in recent years, many lawsuits are expected, potentially totaling in the billions. Families who spoke to the AP and FRONTLINE did so on the condition of anonymity over fears about their families' safety.

"How is it possible that my son was suffering these things?" the father said. "My son is little and couldn't defend himself."

The families — some in the U.S., others already deported to Central America — are represented by grassroots immigration clinics and nonprofit groups, along with some of the country's most powerful law firms. They're making claims under the Federal Tort Claims Act as a precursor to filing lawsuits. The FTCA allows individuals who suffer harm as a direct result of federal employees to sue the government.

"It's the tip of the iceberg," said Erik Walsh, an attorney at Arnold & Porter, which has one of the world's leading pro bono programs.

The firm has so far filed 18 claims on behalf of nine families, totaling $54 million, and Walsh says dozens more are likely coming.

The government has six months to settle FTCA claims from the time they're filed. After that, the claimants are free to file federal lawsuits.

The departments of Justice and Homeland Security — both named in claims — did not respond to requests for comment.

In a statement, Health and Human Services — the agency responsible for the care of migrant children — said it does not respond to pending litigation and that it serves children in a compassionate and organized manner through its Office of Refugee Resettlement.

"The important work happening in each of the facilities and programs in the ORR network around the country — work ORR has done successfully since 2003 — takes an experienced team of competent, hardworking men and women dedicated to the welfare of the children," HHS spokesman Mark Weber said. "We treat the children in our care with dignity and respect."

Last year, the Office of Refugee Resettlement cared for nearly 50,000 children who crossed the border by themselves, as well as children who were separated from their families under the zero tolerance policy. The agency housed them in foster programs, residential shelters and detention camps around the country, sometimes making daily placements of as many as 500 new arrivals, from babies to teens.

The allegations of abuse and assaults in foster care raise fresh questions about the government's efforts to place younger children with families in lieu of larger shelters and packed detention facilities.

The legal claims, a recent federal court filing and Health and Human Services documents released by Congress earlier this year allege that children have suffered serious emotional trauma after being physically harmed or fondled by other children while in foster care.

Six of the claims for damages involve children who were in foster care. And one recent court filing refers to a migrant child being abused in foster care.

The records released by Congress show the Office of Refugee Resettlement referred at least seven foster care allegations of sexual abuse to the Justice Department in 2017 and 2018. Because some are anonymous to protect the children's privacy, it's unclear if some of the claims are duplicates.

Justice has not responded to repeated queries about those cases from members of Congress.

Three of the four incidents involving physical harm outlined in legal filings occurred at Cayuga Centers in New York, the largest foster care placement for migrant children, housing up to 900 babies and children at a time. The kids are supposed to be placed with Spanish-speaking families who are paid $1,000 per month per child.

Cayuga Centers did not respond to requests for comment.

In one Cayuga home, a foster parent found a little girl being forced to touch another child's private parts and kiss her on the lips, according to a memo submitted as part of a federal lawsuit related to family separation.

The girl was 3 when immigration officials took her from her father in March, after they'd crossed the border in Texas. As a result of her trauma, the little girl began to regress in foster care, having difficulty eating, drinking and using the toilet, according to her attorney. The girl was sent back to Honduras on Wednesday, a month after her father was deported.

One Guatemalan mother whose 5-year-old daughter was placed in Cayuga last year says her little girl still wakes up crying from what she endured at the foster home.

"Now she's scared each time we go out or when she sees a police car or someone in uniform," said the mother, who has filed a $6 million claim. "She says 'Mami, don't let them separate us again.'"

Another 5-year-old Guatemalan girl said a boy grabbed her chest and touched her inappropriately, both in her foster home and during daytime classes at a Safe Haven for Children New York foster program, according to a $3 million injury claim. The girl was moved to a new foster home, but there she suffered verbal abuse from her foster parent's mother, who called her names and locked her alone in rooms as punishment, according to the claim.

A spokesman for Lutheran Social Services of New York, which oversees the Safe Haven for Children New York foster program, declined to comment on the allegation.

Two claims blame the government for wrongful deaths: one, seeking $20 million, was filed by the wife of a Honduran father who killed himself in a padded cell after officers pulled his 3-year-old son from his arms.

"Essentially what this policy does, is it makes examples out of families that get ripped apart to deter others," said John Escamilla, who is representing the man's wife and two children. He said he plans to file a federal lawsuit stemming from his FTCA claim as soon as Friday. "The people making these policies intended this level of suffering, and that's what's unconscionable."

In another case not involving child separation, a Guatemalan toddler died after a three-week stay in a family detention center. Her mother's $60 million claim alleges the government failed to give the girl proper medical attention.

The government has not settled any family separation cases in the administrative claims stage. But one federal lawsuit is currently in litigation in Massachusetts, and in February, a federal judge in Connecticut approved a $125,000 settlement in a separate case, for a Honduran mom and her son, then 6, who had been detained for four months and threatened with separation under the Obama administration.

Aseem Mehta, a law student at the Jerome N. Frank Legal Services Organization at Yale Law School who worked on the case, said the settlement — the first of its kind — sends a clear message that such claims have legal standing. Mehta added that Trump's significantly harsher border policies, including family separation, could make for even stronger cases before courts.

"Our case is a benchmark," Mehta said. "The most important takeaway is these claims are viable, and courts will entertain them, and the Department of Homeland Security views them as meritorious; they don't settle cases unless they think there's liability they're exposed to."

Janet Napolitano, who led Homeland Security from 2009 to 2013, said she recalled a number of tort claims were filed against the agency at the time, though she said family separations were rare. The delays in reunifying families and children under the Trump administration may have left the agency open to legal challenges, she added.

"There very well may be some vulnerability there," said Napolitano, now the president of the University of California.

Lawsuits stemming from family separation policies under the Trump administration are expected to be filed by mid-August.

Attorneys for migrant children have aimed several recent legal challenges at larger facilities that are not state-licensed and have held thousands of teens. Some say misconduct is less easily identified in foster care because it requires a child reporting or a foster parent happening to walk in on something occurring in the home.

"We may never know the extent to which children suffered particular abuses in foster homes," said Michelle Lapointe, a senior supervising attorney with the Southern Poverty Law Center.

The Guatemalan father, now living in Southern California, is still struggling to soothe his son's lasting nightmares. He says his third-grader, once talkative and outgoing, is now withdrawn and frequently says he wants to leave this world.

"This can't happen again because for those of us who live through this, it is terrifying," he said.

Daffodil J. Altan of FRONTLINE contributed to this report.