Country music star Kelsea Ballerini called country singer Chase Rice 'selfish' for playing a concert over the weekend to a crowd of unmasked fans in Tennessee. 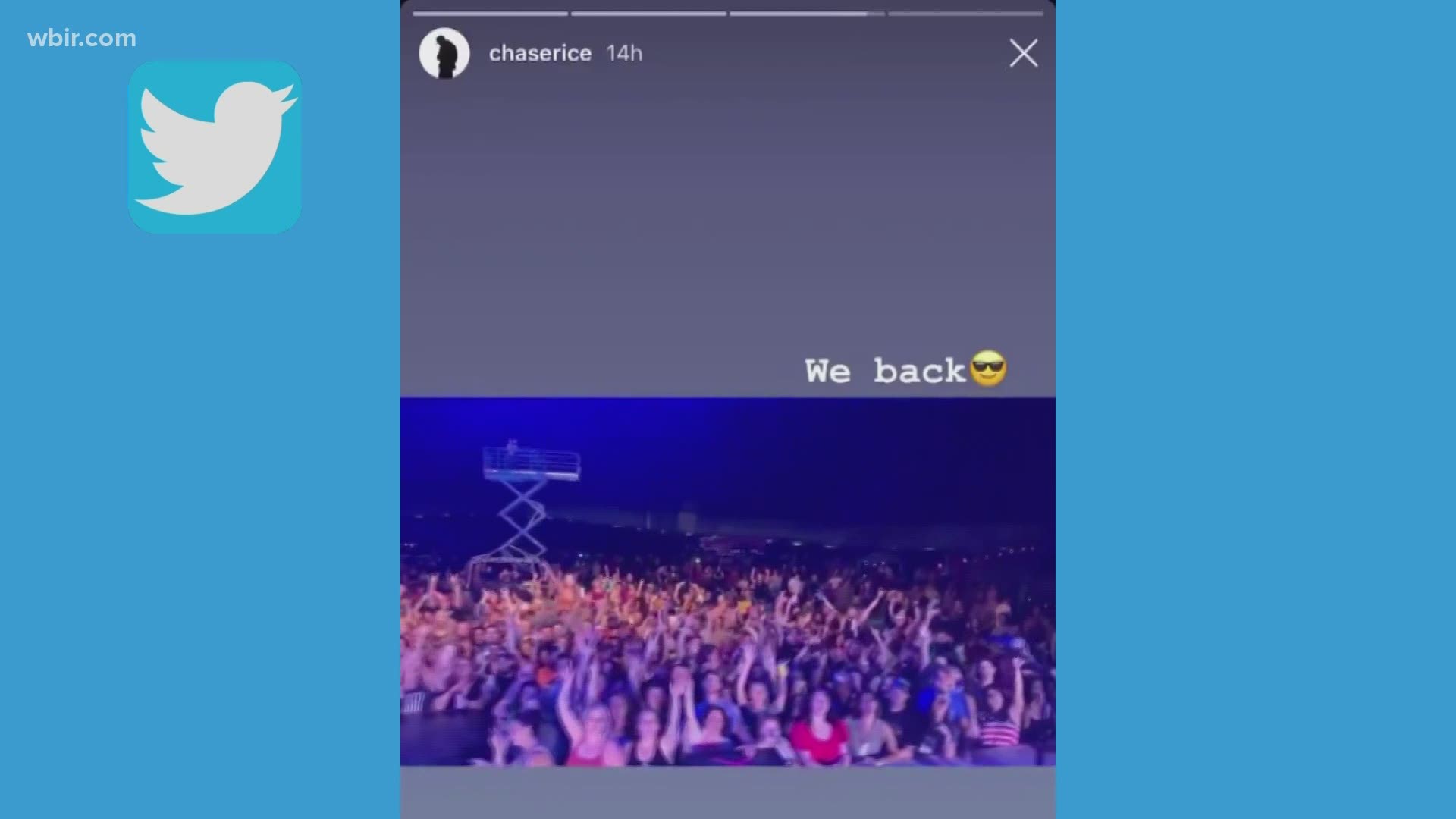 WASHINGTON — Two country music artists are facing criticism after videos showed them playing over the weekend to what appeared to be packed audiences amid the coronavirus pandemic.

Country singer Chris Janson shared footage of a concert crowd at one of his shows Saturday night at the Hwy 30 Fest in Filer, Idaho. While it was hard to see if concertgoers all had on masks, it appears that the audience was packed with attendees standing shoulder-to-shoulder.

Meanwhile, country singer Chase Rice also received backlash after sharing video footage of a show he played in East Tennessee. According to Variety, Rice posted video on Instagram that showed his view from the stage and captioned it "We back."

Ballerini said he "put thousands of people’s health at risk, not to mention the potential ripple effect" and scolded him for playing "a NORMAL country concert right now," in her tweet.

A statement from the Highway 30 Music Fest said they added more bleachers so fans could spread out and be socially distant, the Associated Press reported.

Ballerini urged artists like Rice and Janson to just wait to tour, for fear that artists are putting families at risk by drawing such large crowds.

Brian May, the Vice President of Brushy Mountain Group, the owner of the Morgan County venue where Rice's concert was held, responded in a statement to Variety saying, “all local requirements were abided by for the recent concert, and numerous precautions were taken.” He added that they were considering different protocols for future shows. The venue has six concerts scheduled from July through early October, according to its website.

The venue's safety protocols included temperature checks for guests and staff, requiring vendors to wear masks and gloves and reducing the maximum capacity from 10,000 to 4,000, according to a post on its Instagram page.

May told USA TODAY that less than 1,000 people were at the concert, which provided space in the lawn area for fans to spread out.

A representative for Rice said he declined to comment over the weekend. But the owner of the venue where Rice played said the concert was approved by both city and county officials, the Associated Press reported.

He added that the crowd did not want to voluntarily comply with social distancing guidelines.

“We were unable to further enforce the physical distancing recommended in the signage posted across the property and are looking into future alternative scenarios that further protect the attendees, artists and their crews and our employees. We are reevaluating the series from the top to bottom — from implementing further safety measures, to adding stanchions, to converting the space to drive-in style concerts, to postponing shows,” May said to VARIETY.

Other country music stars also held concerts over the weekend including Jimmie Allen, who played a drive-in show.  Artist Jon Pardi held an outdoor show in Georgia that was described as a dinner show where those who came were set up at tables inside of a 15x15 square.

Like the Chase Rice show in Tennessee, temperatures were checked at the door, but masks were said to be required only on shuttles to the venue for Pardi's show in Georgia, not during dinner or the performance.