Elsa was expected to bring 2 to 4 inches of rain to Georgia as it churns to the northeast before entering South Carolina to the west of Savannah early Thursday. 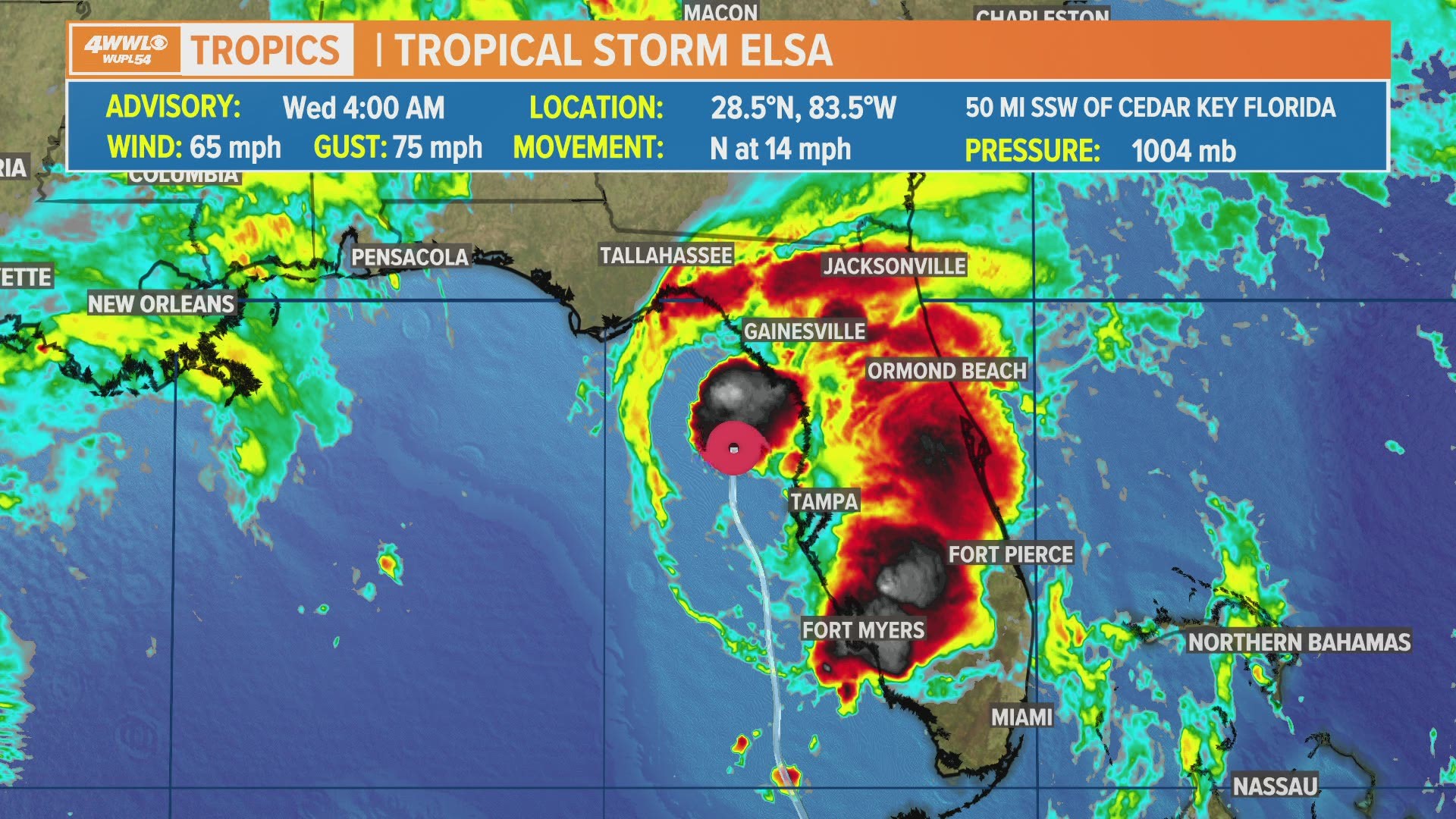 Gov. Ron DeSantis told a news conference that no major structural damage or storm deaths had been reported.

“Clearly, this could have been worse,” the Republican governor said, though he cautioned that many storm-related deaths happen after the system passes. “Be very careful when you're working to clear debris.”

Even after Elsa struck land, tropical storm warnings remained Wednesday afternoon along Florida's Big Bend as well as for the entire Georgia and South Carolina coasts. Tornado watches were also in effect in parts of northern Florida and southeast Georgia until 8 p.m. Wednesday.

Scattered power outages were being reported along Elsa's path Wednesday afternoon, with about 30,000 homes and businesses on either side of the Georgia-Florida state line without electricity, according to the website poweroutages.us.

In Steinhatchee, Florida, not far from where Elsa came ashore, there was some flooding, but no worse than the town typically sees from heavy rain, said Melissa Roper, whose family owns Off The Clock Fisheries and Marina along the Steinhatchee River.

“It’s definitely a lot better than expected considering it was supposed to be a hurricane that hit,” Roper said. “We’re pretty fortunate.”

Elsa's center was forecast to cross into southeast Georgia on Wednesday afternoon, bringing a risk of flooding from an anticipated 2 to 4 inches (5 to 10 centimeters) of rain. The storm was forecast to move into South Carolina early Thursday, and by Friday its effects could be felt as far north as New England.

The storm complicated the search for potential survivors and victims in the collapse of a Miami-area condominium on June 24. Regardless, crews continued the search in the rubble of Champlain Towers South in Surfside, Florida, on the state’s southeast coast.

The storm also temporarily halted demolition Wednesday on the remainder of an overturned cargo ship off the coast of Georgia. The South Korean freighter Golden Ray capsized in September 2019 off St. Simons Island, about 70 miles (110 kilometers) south of Savannah. Crews have removed more than half the ship since November.

Most salvage workers were sheltering indoors Wednesday, said Coat Guard Petty Officer 2nd Class Michael Himes, a spokesperson for the multiagency command overseeing the demolition. The towering crane being used to cut the ship apart into giant chunks remained in place straddling the wreck, stabilized by mooring lines attached to anchors and pilings. The crane was also anchored to the shipwreck itself, which weighs about 13,200 tons (12,000 metric tons), Himes said.

We’re fortunate to see minimal damage & flooding this morning, but it’s important to keep safety top of mind. Be aware of your surroundings & don’t drive through flood waters. pic.twitter.com/ztvBlzsmUU

Himes said crews would be watching to see if Elsa’s winds scatter any debris from the ship into the surrounding water. The vessel’s remains are open at both ends, like a giant tube on its side, and its cargo decks still contain hundreds of bashed and mangled cars.

At the Hillbilly Fish Camp and R.V. Park in the south Georgia town of Waycross, Margie Freitag hunkered down Wednesday after pulling boats out of the water and picking up loose items ahead of the storm. Freitag said she had plenty of supplies after stocking up for the coronavirus pandemic.

“We already had flashlights and batteries and were totally stocked up with food, water and things like that,” she said. “We’re right on the lake and we can see the rain hitting and wind coming across the lake.”

Out on Edisto Beach, South Carolina, where a tropical storm warning was in effect, Wednesday started muggy and overcast.

“The kind of day you can just feel the weather wanting to move in,” Mayor Jane Darby said.

The forecast for the barrier island 30 miles (48 kilometers) down the coast from Charleston was similar to a heavy summer thunderstorm – an inch or two (2.5 to 5 centimeters) of rain, winds gusting up to about 40 mph (64 kph) and maybe a little beach erosion with the worst of Elsa expected between low and high tides. Other South Carolina beaches expected similar conditions, coming mostly overnight to be less of a bother to visitors during an extremely busy summer.

“Businesses are struggling with workers in short supply a lot more than they are going to be bothered by this storm," Darby said. "That’s where the stress is now.”

Elsa is already the third tropical system to hit South Carolina. In June, Tropical Storm Claudette moved across the northern part of the state after making landfall in Louisiana and Tropical Storm Danny hit land near Hilton Head Island. Both storms caused only minor damage.

Meanwhile, the U.S. Coast Guard said 13 people were rescued from a boat that had left Cuba with 22 people aboard late Monday. Nine people remained missing.

Elsa is the earliest fifth-named storm on record, said Brian McNoldy, a hurricane researcher at the University of Miami.