Joe Biden has begun signing executive orders meant as a display of action to address the historic challenges he inherited. 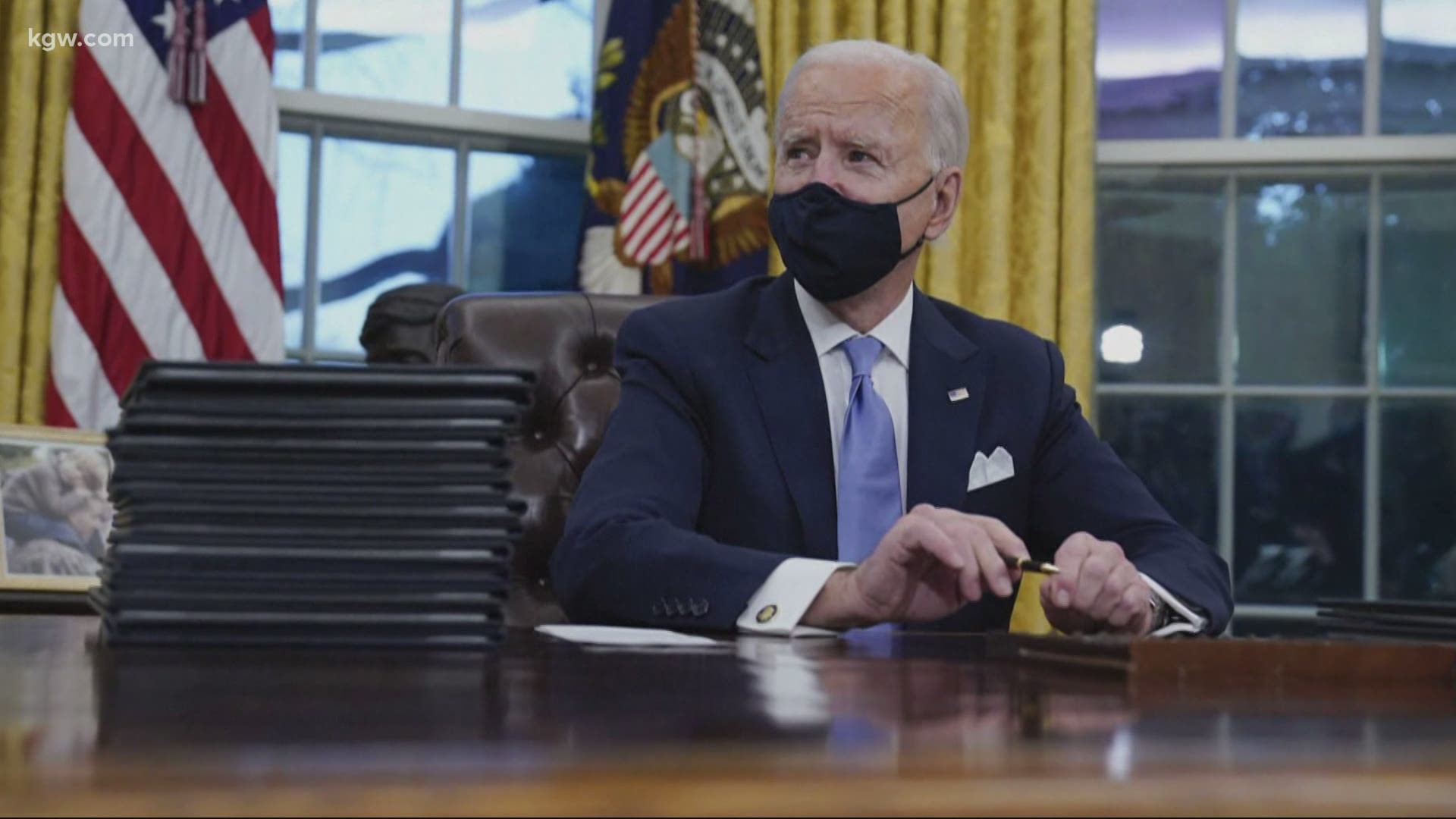 Inside the White House, President Joe Biden presided over a focused launch of his administration, using his first days in office to break sharply with his predecessor while signing executive orders meant as a showy display of action to address the historic challenges he inherited.

But outside the gates at 1600 Pennsylvania Ave., there were signs everywhere that those crises are as deep and intractable as ever. The coronavirus pandemic surges, the economy teeters and Republicans in Congress have signaled objections to many of Biden's plans.

Biden is looking to jump-start his first 100 days in office with action and symbolism to reassure a divided and weary public that help is in the offing. He also knows that what a president can do on his own is limited so he is calling for Congress to act while he is being candid with Americans that dark days are ahead.

"The crisis is not getting better. It's deepening," Biden said Friday about the impact of pandemic. "A lot of America is hurting. The virus is surging. Families are going hungry. People are at risk of being evicted again. Job losses are mounting. We need to act."

Biden's first moments as president were meant to steady American democracy itself.

He took the oath just before noon Wednesday in front of a Capitol that still bore scars from the insurrection that took place precisely two weeks earlier and was aimed at stopping Biden's ascension to power. The violence underscored the fragile nature of the peaceful transfer of power and led to the historic second impeachment of Donald Trump.

Biden resisted calls to move the inauguration to a more secure indoor setting. He was intent on preserving the usual inauguration trappings as a signal that normalcy could be achieved even though there were signs everywhere that things were far from normal: a military presence that resembled a war zone, guests on the dais wearing masks, a National Mall filled with 200,000 American flags standing in for the American people who were asked to stay away because of the pandemic.

Biden was plain-spoken and direct about the confluence of crises the nation faces. More than 410,000 Americans have lost their lives to the pandemic, millions are out of work and the aftershocks of a summer reckoning with racial justice are still felt.

"You can hear this collective sigh of relief that Trump is gone, but we have no time for a sigh of relief because of the cascading crises," said Eddie Glaude Jr., chair of the department of African American studies at Princeton University. "We don't want to assume that the election of Biden solves everything. The scale of the problems is immense and the question for us is do we respond at scale."

The changes within the White House have been swift.

After Trump's departure, his final staffers cleared out and a deep clean began. The White House had been the site of multiple COVID-19 outbreaks and, in a physical manifestation of a new approach to the virus, plastic shields were placed on desks and scores of new staffers were told to work from home.

New pictures were hung on the West Wing walls and the Oval Office received a fast makeover. Gone were a painting of Andrew Jackson and the Diet Coke button of the desk; in came images of Robert Kennedy and Cesar Chavez. But the most important symbol, the clearest break from the previous administration, came from the president himself.

When Biden sat down at the Resolute Desk to sign his first batch of his executive orders on Wednesday, he was wearing a mask. Trump had resisted wearing one, putting one on only occasionally and instead turning mask-wearing into a polarizing political issue

Biden urged all Americans to wear a mask for the next 100 days and used his platform to model the same behavior, one of several ways he tried to change the tone of the presidency in his first few days.

Daily press briefings returned, absent the accusations of "fake news" that marked only sporadic briefings in the Trump era. Biden held a virtual swearing-in for hundreds of White House staffers, telling them to treat each other with respect or they would dismissed, a marked change from the contentious, rivalry-driven Trump West Wing. Calls to the leaders of Canada and Mexico were made without drama.

The executive actions Biden signed during the week were a mix of concrete and symbolic actions meant to undo the heart of Trump's legacy. Biden halted construction of the border wall, rejoined the World Health Organization and the Paris climate accord and bolstered the means for production for vaccines.

But the might of the executive actions pales in comparison to the $1.9 trillion COVID-19 relief package that he requested from Congress. Biden has not ruled out asking Senate Majority Leader Charles Schumer, D-N.Y., to push it through by tactics requiring only Democratic support. But the president, who spent decades in the Senate, hoped to persuade Republicans to support the measure.

"Leaning on executive action makes sense at the start, you can get things going and show momentum right away without waiting for Congress," said Robert Gibbs, former press secretary for President Barack Obama. "But this is going take a while. Like it was for us in 2009, change doesn't come overnight."

"Everything he inherited is likely to get worse before we see improvement," Gibbs saidtinued. "One thing you learn on January 20th is that you suddenly own all of it."

Just two Cabinet nominees were confirmed by week's end, to the frustration of the White House. But with the Friday night announcement that Trump's impeachment trial will not begin until the week of Feb. 8, Biden aides were optimistic that the Senate would confirm more before then.

The trial looms as an unwelcome distraction for the Biden team. But while Trump will shadow the White House, Biden aides have noted that the former president commands far less attention now that his Twitter account is gone. They have expressed confidence that the Senate can balance the impeachment proceedings with both Cabinet confirmations and consideration of the COVID-19 relief bill.

Biden has made clear that steering the nation through the pandemic will be his signature task and some Republicans believe that Trump's implosion could create an opening to work across the aisle on a relief deal.

"There is a very narrow permission structure for congressional Republicans who want to move past the Trump era and want to establish their own political identities," said Kevin Madden, a Republican strategist who was a senior adviser on Mitt Romney's 2012 presidential campaign. Romney is now a Utah senator.

"There is an old saying: 'Make the main thing the main thing.' And the Biden White House knows that's the main thing," Madden said. "If they can improve the pandemic response in the next 100 days, then they can move on to other priorities, they'll have the capital for legislative fights. But they need to get it right."