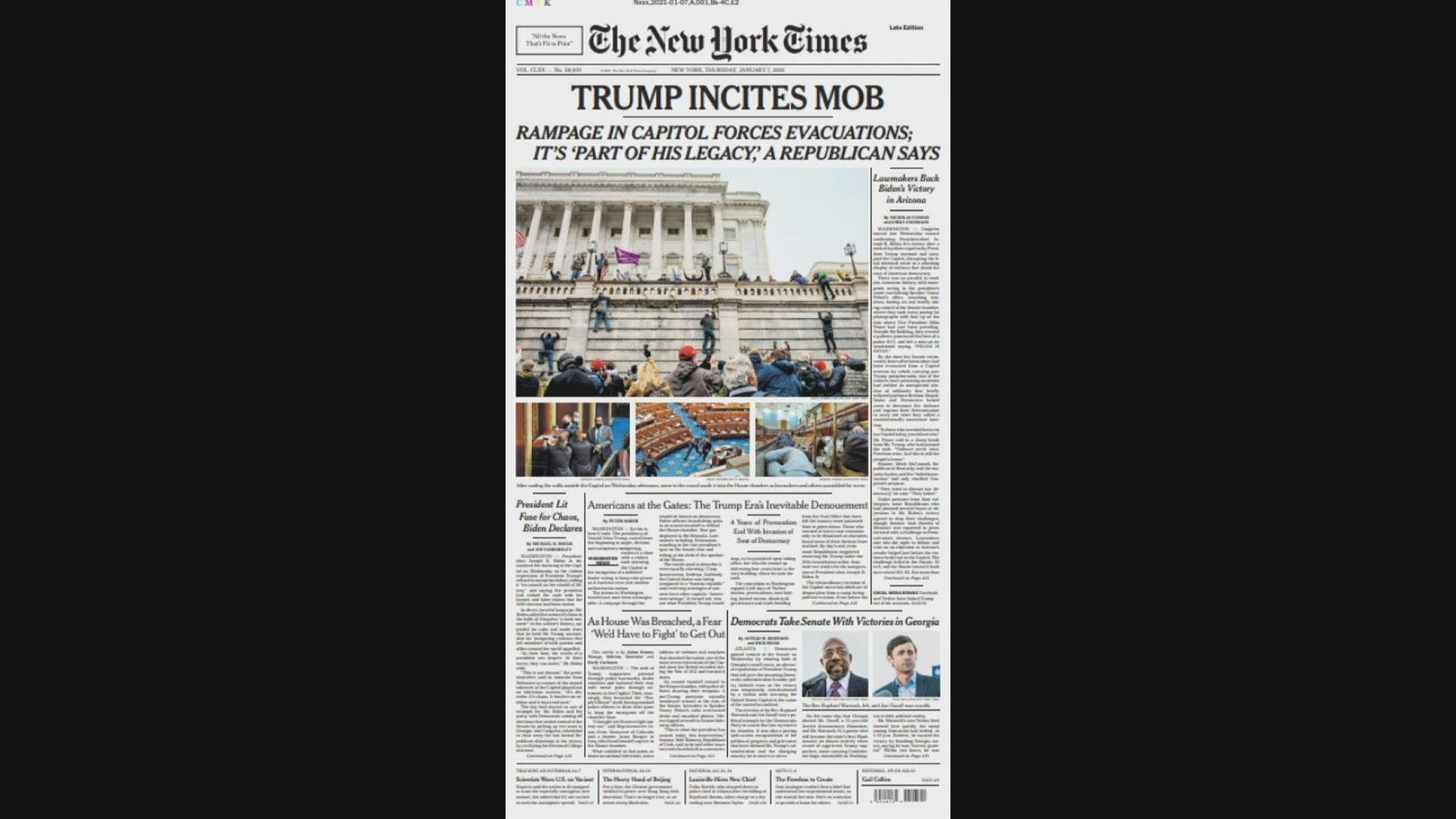 WASHINGTON — The storming of the U.S. Capitol by a violent mob loyal to President Donald Trump dominated newspaper front pages worldwide on Thursday.

January 6, 2021, began as a day of reckoning for President Trump’s futile attempt to cling to power, as Congress took up the certification of President-elect Joe Biden’s victory. However, it fractured into scenes of fear and agony after the Capitol was under siege for hours by rioters, forcing lawmakers into hiding before being evacuated by police.

A pro-Trump mob overran the U.S. Capitol, occupying one hallowed space of American democracy after another. A woman was shot and killed by police, and three others died in apparent medical emergencies.

Authorities eventually regained control, as night fell. Heavily armed officers brought in as reinforcements started using tear gas to get people moving toward the door, pushing the mob farther away in clouds of tear gas, flash-bangs and percussion grenades.

Newspapers from across the country and around the world on Thursday morning depicted the madness of what transpired at the U.S. Capitol.

Many newspapers in Europe also led with Wednesday's insurrection.

Take an early look at the front page of The Wall Street Journal https://t.co/i1VtaVQq6H pic.twitter.com/p4c83YmSUI

For the first time since 1814, the U.S. Capitol is stormed. Take a look a Thursday's @PhillyInquirer front page. Photo by @jessicagriffin. pic.twitter.com/K6L0wnUmmQ

On today's #frontpage:
–Violence follows Trump refusal to give up power: Chaos erupted in the U.S. Capitol as the president's supporters stormed the halls of Congress to disrupt a largely symbolic proceeding.
–'Colossal failure': How did law enforcement allow this to happen? pic.twitter.com/jItLMHlUzn

The cover of China Daily. So much for the US taking a tough stand on Hong Kong, and China’s other transgressions. America’s global standing has taken a massive hit, due to its President. pic.twitter.com/ZIBfc7YtXi

Here's an early look at the front page for January 7, 2021. pic.twitter.com/IKadxX65VA

RELATED: Hong Kongers call US violence a setback for democracy