Protesters in several states have been advocating for the swift removal of Confederate statues, with or without the approval of authorities. 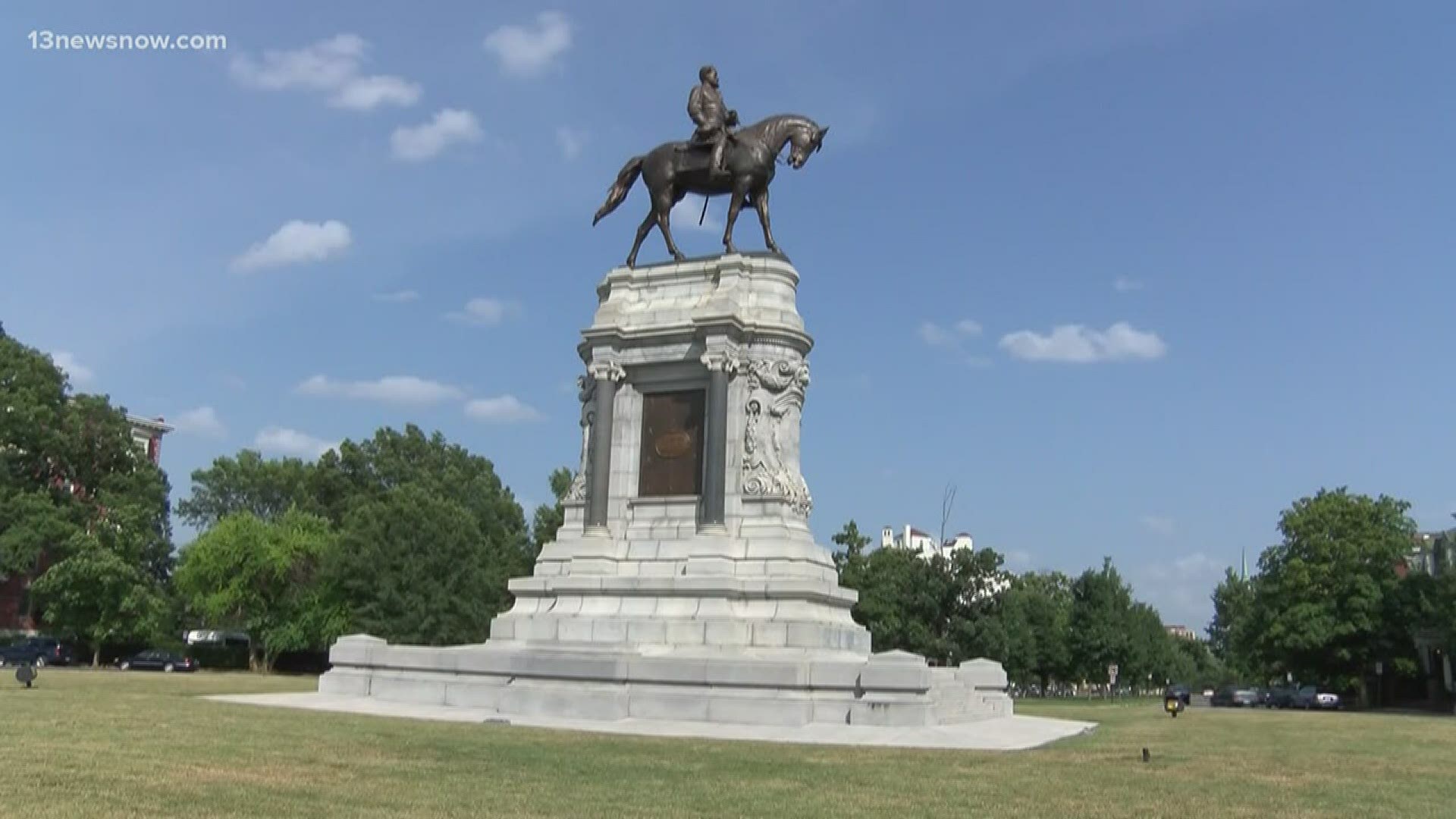 RICHMOND, Va. — As the effort to remove a statue of Confederate General Robert E. Lee rolls on in Richmond, Virginia, protesters have found a unique way to have their message be heard.

For several nights this week, an image of George Floyd has been projected on the base of the Lee statue in Richmond.

Virginia Gov. Ralph Northam last week ordered the statue of Lee to be taken down, citing the pain felt across the country over the death of George Floyd, a black man in Minneapolis, after a white police officer pressed a knee into his neck for several minutes.

After bystander video of Floyd's death surfaced, demonstrators around the world vowed to sustain a movement focused on addressing racial injustice and police brutality.

Opponents of the monuments say they celebrate white supremacy and gloss over the nation’s history of slavery. Others who advocate for keeping them say they have historical or artistic value and their removal amounts to erasing history.

A judge in Richmond on Monday issued an injunction preventing Northam’s administration from removing an iconic statue of Lee for 10 days.

RELATED: Robert E. Lee statue, other Confederate monuments in Richmond to come down

The temporary injunction order says the state is a party to a deed recorded in March 1890 in which it accepted the statue, pedestal and ground they sit on and agreed to “faithfully guard" and “affectionately protect” them.

Credit: AP Photo/Steve Helber
An image of George Floyd is projected on the base of the statue of Confederate General Robert E. Lee on Monument Avenue, Monday, June 8, 2020, in Richmond, Va. The statue has been the focal point of protester over the death of George Floyd. Virginia Gov. Ralph Northam has ordered the removal of the statue.

The lawsuit was filed by William C. Gregory, who is described in the complaint as a descendant of two signatories to the deed. Named as defendants are Northam and the director of the Department of General Services, the agency tasked with handling the removal.

“(Gregory's) family has taken pride for 130 years in this statue resting upon land belonging to his family and transferred to the Commonwealth in consideration of the Commonwealth contractually guaranteeing to perpetually care for and protect the Lee Monument,” the lawsuit says.

Northam's spokeswoman, Alena Yarmosky, said in a statement that the governor's administration is still reviewing the order.

“Governor Northam remains committed to removing this divisive symbol from Virginia's capital city, and we're confident in his authority to do so," she said.

Authorities have removed other symbols since protests erupted two weeks ago, including a massive obelisk in Birmingham, Alabama, and a bronze likeness of Admiral Raphael Semmes that had stood in a middle of a downtown street near the Mobile, Alabama, waterfront for 120 years. In Fredericksburg, Virginia, a 176-year-old slave auction block was removed from the city’s downtown, and the United Daughters of the Confederacy removed its statue from Old Town, Alexandria.

RELATED: Protesters tear down Christopher Columbus statue in Richmond, then throw it in a lake