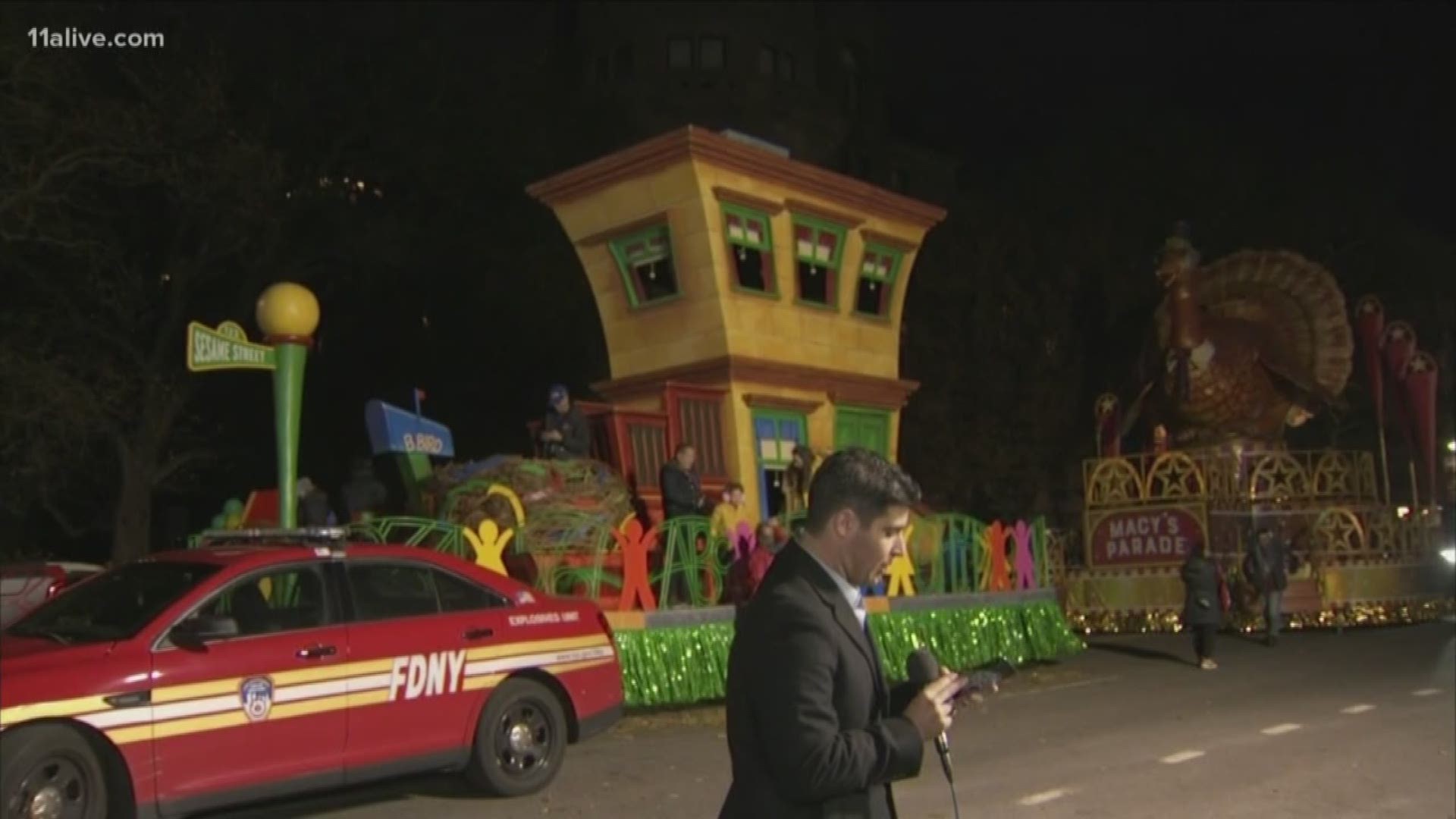 NEW YORK — The balloons were low, but sprits were high as the Macy’s Thanksgiving Day Parade marched its way along the streets of midtown Manhattan on Thanksgiving day. Wind threatened to scuttle plans to send the balloons through the parade route, but organizers decided to let the tethered blow-up characters roll.

Handlers kept them close to the ground, which afforded the throngs lining the parade route a chance to get close-up views of their favorites as the parade wended its way downtown. Spectators lined up a half-dozen deep along the parade route on a gusty fall day — as both leaves and confetti swirled in the wind.

Astronaut Snoopy, a new version of a longtime parade favorite, was among the giant inflated characters leading the lineup.

Joanna Mammen and her family came from Bradford County in northern Pennsylvania to revisit the parade she attended every year — rain, shine or wind — as a girl growing up in the Bronx.

“My favorite float, as a kid, was Santa Claus,” said Mammen, 69. “Most of the other floats from that time, the kids these days wouldn’t even recognize. But it’s a beautiful tradition, to come out and experience the crowd.”

It was a first-time experience for her husband, Bill. And for him, it was all about sharing the fun the couple’s son, Jason, and 2-year-old grandson, Lincoln.

Spectators lined up a half-dozen deep along the route on a breezy but beautiful fall day, with leaves and confetti swirling in the wind.

Parade officials and the New York Police Department had been keeping an eye on wind gauges along the 2.5-mile (4-kilometer) parade route that snakes through Manhattan.

The National Weather Service had projected sustained winds of up to 24 mph (39 kph) with gusts to 40 mph (64 kph) during the parade.

City rules require balloons to be grounded if sustained winds exceed 23 mph (37 kph) and gusts exceed 34 mph (55 kph). The balloons have been grounded only once for weather-related reasons, in 1971.

On Thursday, Macy’s Vice President Susan Tercero made an announcement a half-hour before the parade started that the balloons would fly, albeit at a lower level.

The parade, one of the city’s most popular events, features about 8,000 marchers, two dozen floats and marching bands, ending with an appearance from Santa Claus.

Among the performers scheduled for this year were actor Billy Porter of “Pose,” and singers Celine Dion, Ciara, Kelly Rowland and Idina Menzel.

The rules requiring them to be grounded in high-wind conditions came after wind blew a “Cat in the Hat” balloon into a lamppost near Central Park in 1997, critically injuring a woman.

In 2005, eight years after the “Cat and the Hat” went off course, an M&M’s balloon smacked into a lamppost in Times Square, causing cuts and bruises to a woman in a wheelchair and her 11-year-old sister.

In 2017, a gust on an otherwise calm day sent a smaller balloon into a tree branch. That one popped and fell harmlessly onto the crowd.