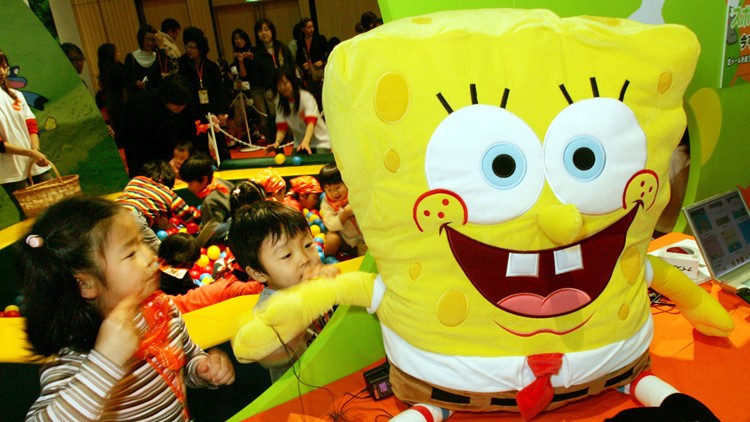 Photo by: AP
Japanese children try to touch a stuffed doll of SpongeBob SquarePants for a souvenir photo during a kids' event that featured games, treats, magic shows in Tokyo Sunday, Dec. 3, 2006. Square and yellow, SpongeBob wasn't supposed to have much chance for success in Japan, a nation famous for its love of more curvaceous, cuddly characters in softer colors like baby pink. But the perky buck-toothed American animation underwater hero is proving the skeptics wrong. (AP Photo/Shuji Kajiyama)

Nickelodeon has ordered 13 episodes of "Kamp Koral," a "Spongebob Squarepants" prequel. The series will follow a younger Spongebob during his summer at sleepaway camp.

The beloved yellow sponge will be 10 years old in the new series. He'll be spending the series with his friends, building underwater campfires, catching wild jellyfish and swimming in Lake Yuckymuck.

"SpongeBob has an incredible universe to expand upon and the greenlight for "Kamp Koral" is a testament to the strength and longevity of these characters known and loved by generations of fans around the world,” said Ramsey Naito, EVP Animation Production and Development, Nickelodeon.

"Spongebob Squarepants" started airing on Nickelodeon on July 17, 1999. During its tenure, it was the number one kids' animated series on TV for 17 years.

While the original series was 2D animated, the new series will be a CG animated series. “SpongeBob SquarePants” Marc Ceccarelli and Vincent Waller will co-executive produce the prequel.

Several other "Spongebob" spin-offs are also in planning stages, including standalone series for beloved side characters like Sandy Cheeks and Plankton.