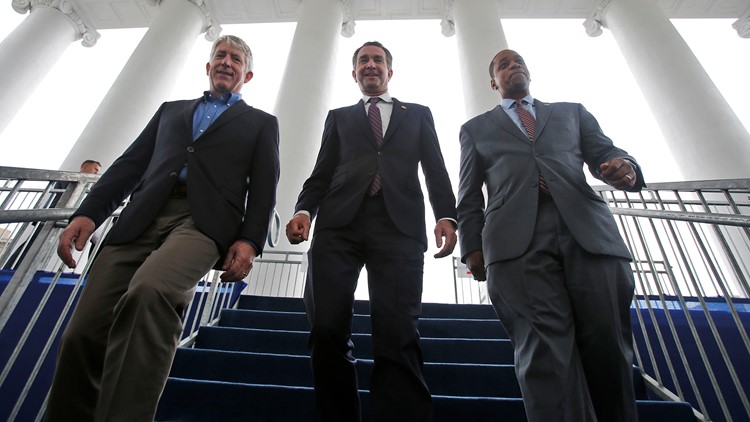 RICHMOND, Va. — Virginia Gov. Ralph Northam told his top staff Friday that he is not going to resign over a racist photo that has roiled state politics despite intense pressure to step down, according to a top administration official.

Northam called a Cabinet meeting Friday afternoon to announce his intention to stay, the official said. The official was not authorized to discuss the matter publicly and spoke on condition of anonymity.

The announcement comes at the end of an unprecedented week in Virginia history that has seen the state's three top Democrats embroiled in potentially career-ending scandals.

The tumult began last Friday afternoon, when Northam's medical school yearbook page surfaced with a picture of one person in blackface and another in a Ku Klux Klan hood and robe.

Northam immediately apologized for appearing in the photograph, saying he could not "undo the harm my behavior caused then and today." Most of the Democratic establishment called for his resignation by the end of the day.

On Saturday, though, the governor reversed course and said he wasn't in the picture. He said he wasn't going to resign immediately because he owed it to the people of Virginia to start a discussion about race and discrimination and listen to the pain he had caused.

"I believe this moment can be the first small step to open a discussion about these difficult issues," Northam said. But the governor left his long-term plans open, saying he would reassess his decision not to resign if it became clear he had no viable path forward.

The pressure on Northam reached a crescendo Saturday when almost the entire Virginia Democratic establishment, as well as nearly every Democratic presidential hopeful, called on him to resign. That pressure has tapered off as a cascade of scandals involving top politicians has rocked the state.

California college professor Vanessa Tyson publicly accused Lt. Gov. Justin Fairfax of forcing her to perform oral sex on him at a hotel in 2004 during the Democratic National Convention in Boston. Fairfax, who would replace Northam if he resigned, has cast the allegations as a political smear.

Lt. Gov. Justin Fairfax presides over the state Senate in Richmond, Va., on Thursday, Feb. 7, 2019. California college professor Vanessa Tyson has made an allegation of sexual assault against Fairfax. He has denied the allegations, casting them as a political smear. (Steve Earley/The Virginian-Pilot via AP)
AP

And Attorney General Mark Herring — in line to become governor if Northam and Fairfax resign — admitted putting on blackface in the 1980s, when he was a college student. Herring had previously called on Northam to resign and came forward after rumors about the existence of a blackface photo of him began circulating at the Capitol.

Although the Democratic Party has taken almost a zero-tolerance approach to misconduct among its members in this #MeToo era, a housecleaning in Virginia could be costly: If all three Democrats resigned, Republican House Speaker Kirk Cox would become governor.

Northam's decision to stay in office comes despite many fellow Democrats in Virginia and beyond reiterating their calls for him to resign as recently as Friday.

Democratic Sen. Cory Booker of New Jersey, a 2020 presidential hopeful, said Friday that he still thinks Northam should step down.

"I think it dredges up very hurtful, painful things from the past. ... I think he's betrayed the public trust, and he should resign," Booker said in response to a reporter's question during an appearance in Iowa.

And in statements Thursday night, the state legislature's Black Caucus and Virginia's Democratic congressional delegation reiterated calls for the governor to step down, while the state House Democrats — who also previously called for Northam's resignation — said they remain disappointed in him.

In a positive sign for Northam, even before he announced his plan to stay in the job, a lawmaker from Virginia's Democratic-leaning D.C. suburbs said Friday he won't call on the besieged governor to resign.

"I will not request the Governor's resignation," State Sen. Chap Petersen, a Democrat, said in a statement. "Nor will I request any other official to resign until it is obvious that they have committed a crime in office or their ability to serve is irredeemably compromised."

There has also been little appetite among lawmakers to use official means to force him out. Cox, the House speaker, himself said Monday that there was "a rightful hesitation" among lawmakers to seek Northam's impeachment or removal. He called on Northam to resign, saying "that would obviously be less pain for everyone."

Regarding the allegation against Fairfax, the district attorney's office in Boston declined to say whether it is investigating. Under Massachusetts law, the statute of limitations is 15 years for rape and several related crimes, an interval that would expire this summer for the woman's accusation.