Biden is aiming for at least small group gatherings by the Fourth of July. 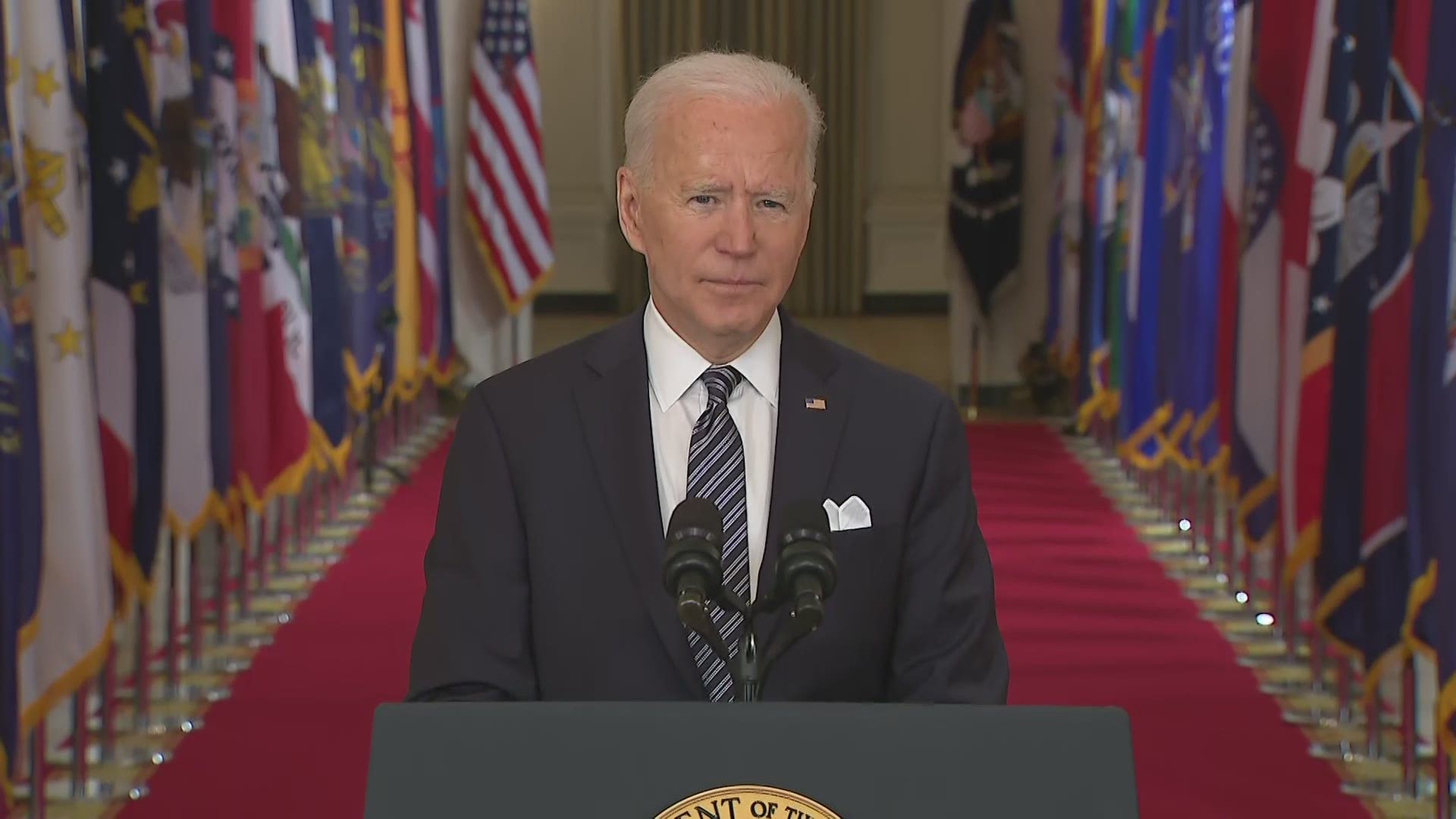 WASHINGTON — One year after the nation was brought to a near-standstill by the coronavirus, President Joe Biden used his first prime-time address Thursday night to announce his plan to make all adults vaccine-eligible by May 1 and “begin to mark our independence from this virus” by the Fourth of July. He offered Americans fresh hope and appealed anew for their help.

He is also directing more doses toward some 950 community health centers and up to 20,000 retail pharmacies, to make it easier for people to get vaccinated closer to their homes.

His aim: let Americans gather at least in small groups for July Fourth and “make this Independence Day truly special.”

Biden was marking one year since the onset of the pandemic that has killed more than 530,000 Americans and disrupted the lives of countless more.

“While it was different for everyone, we all lost something," Biden said, calling the past year “a collective suffering, a collective sacrifice.”

RELATED: How much will your stimulus payment be? This calculator can help 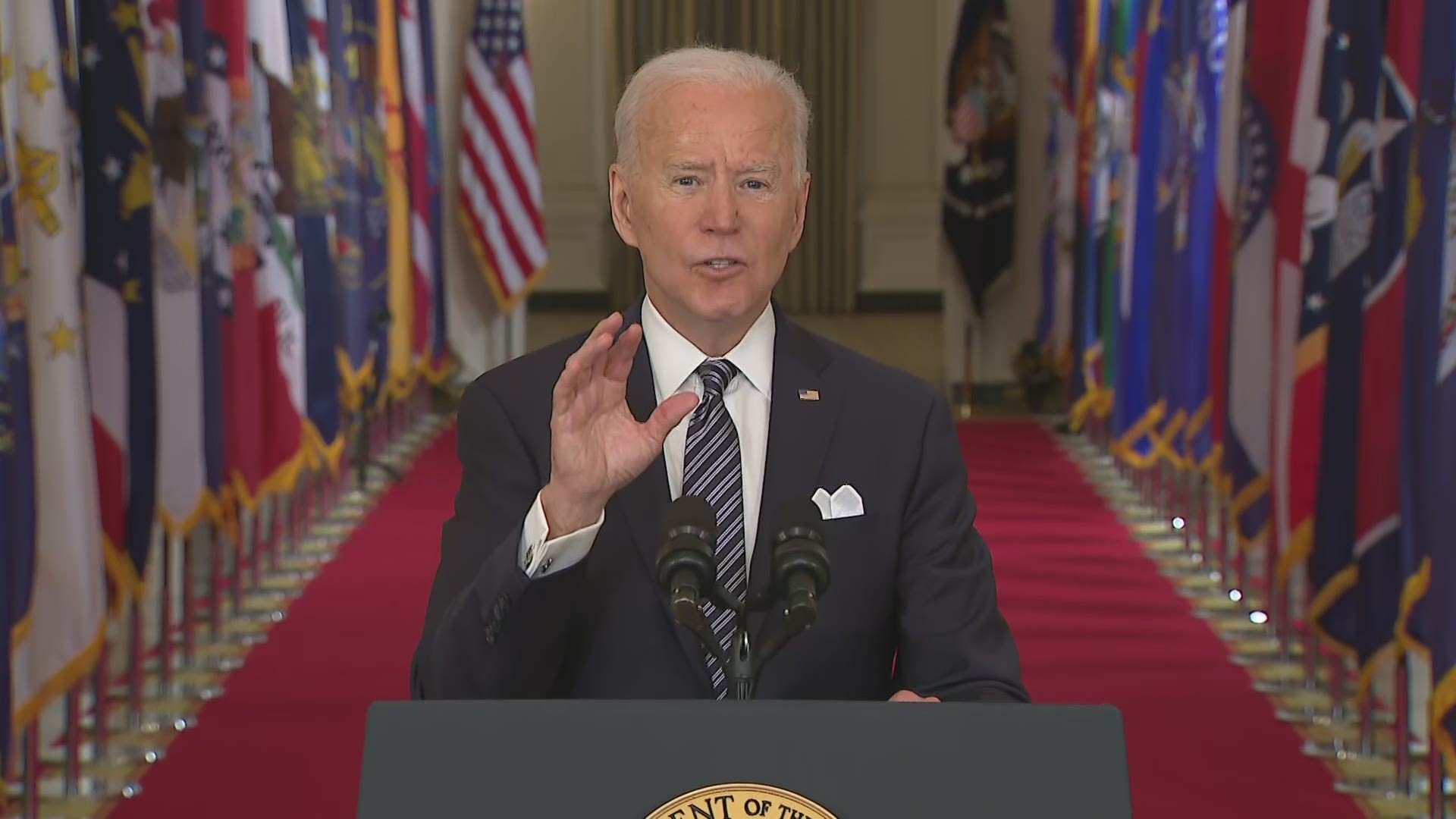 Earlier Thursday, Biden signed into law a $1.9 trillion relief package that he said will help defeat the virus, nurse the economy back to health and deliver direct aid to Americans in need. Some direct checks could begin arriving this weekend.

“This historic legislation is about rebuilding the backbone of this country,” Biden said as he signed the bill in the Oval Office.

Most noticeable to many Americans are provisions providing up to $1,400 in direct payments and extending $300 weekly emergency unemployment benefits into early September. Also included are expanded tax credits over the next year for children, child care and family leave — some of them credits that Democrats have signaled they’d like to make permanent — plus spending for renters, feeding programs and people’s utility bills.

In his Thursday night address, Biden said that as vaccine supplies continue to increase, he will direct states and territories to make all adults eligible for vaccination by May 1. The U.S. is expecting delivery of enough doses for those 255 million adults by the end of that month, but the process of actually administering those doses will take time.

Credit: AP
President Joe Biden speaks about the COVID-19 pandemic during a prime-time address from the East Room of the White House, Thursday, March 11, 2021, in Washington. (AP Photo/Andrew Harnik)

Biden said his administration is launching a nationwide website to help people find doses, saying it would address frustrations so that there would be “no more searching day and night for an appointment.”

Even as he offered optimism, Biden made clear that the July 4 timetable applied only to smaller gatherings, not larger ones, and requires cooperation from Americans to continue to wear face coverings, maintain social distancing and follow federal guidelines meant to slow the spread of the virus in the near term. He also called on them roll up their sleeves to get vaccinated as soon as they’re eligible.

This is “not the time to not stick with the rules," Biden said, warning of the potential for backsliding just as the nation is on the cusp of defeating the virus. “I need you, the American people," he added. "I need you. I need every American to do their part.”

The House gave final congressional approval to the sweeping package by a near party line 220-211 vote on Wednesday, seven weeks after Biden entered the White House and four days after the Senate passed the bill. Republicans in both chambers opposed the legislation unanimously, characterizing it as bloated, crammed with liberal policies and heedless of signs the crises are easing.

RELATED: Biden's first 50 days: Where he stands on key promises

Biden originally planned to sign the bill on Friday, but it arrived at the White House more quickly than anticipated.

"We want to move as fast as possible,” tweeted chief of staff Ron Klain.

Biden's initial prime-time speech was “a big moment,” said presidential historian and Rice University professor Douglas Brinkley. “He’s got to win over hearts and minds for people to stay masked and get vaccinated, but also recognize that after the last year, the federal government hasn’t forgotten you.”

Biden’s evening remarks in the East Room were central to a pivotal week for the president as he addresses the defining challenge of his term: shepherding the nation through the twin public health and economic storms brought about by the virus. 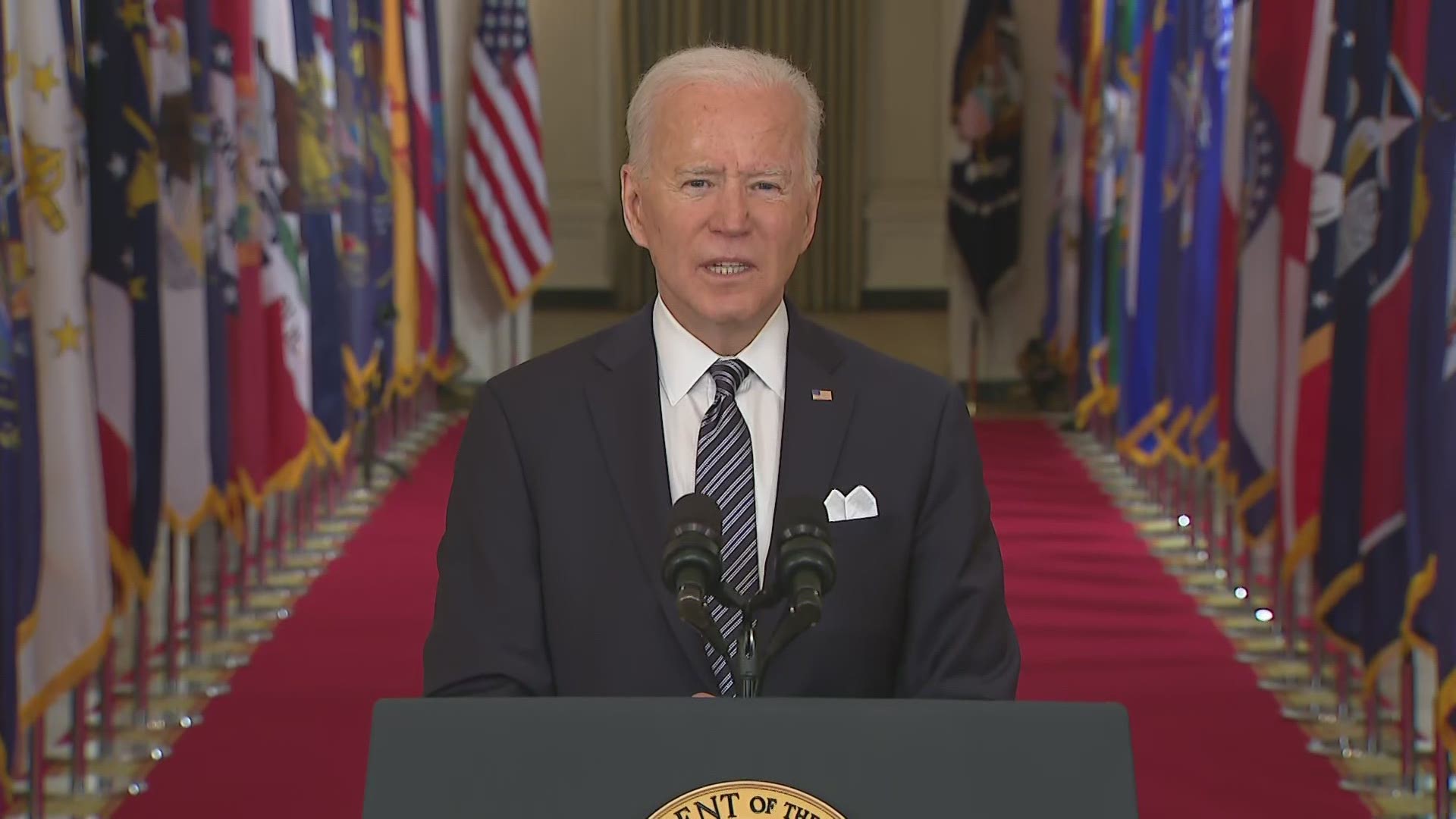 On Monday, the Centers for Disease Control and Prevention released initial guidance for how vaccinated people can resume some normal activities. On Wednesday, Congress approved the president’s $1.9 trillion “American Rescue Plan,” aimed at easing the economic impact of the virus on tens of millions of people. And the nation was on pace to administer its 100 millionth dose of vaccine as soon as Thursday.

Almost exactly one year ago, President Donald Trump addressed the nation to mark the WHO’s declaration of a global pandemic. He announced travel restrictions and called for Americans to practice good hygiene but displayed little alarm about the forthcoming catastrophe. Trump, it was later revealed, acknowledged that he had been deliberately “playing down” the threat of the virus.

For Biden, who has promised to level with the American public after the alternate reality of Trump’s virus talk, the imperative is to strike the correct balance “between optimism and grief,” said Princeton history professor and presidential scholar Julian Zelizer.

“Generally, the country likes optimism, and at this particular moment they’re desperate for optimism, but you can’t risk a ‘Mission Accomplished’ moment,’” he said, warning against any premature declaration that the threat has been vanquished.