As of nightfall across much of the country Sunday, there were no reports of clashes. During the day, crowds of only a dozen or two demonstrated at some capitols. 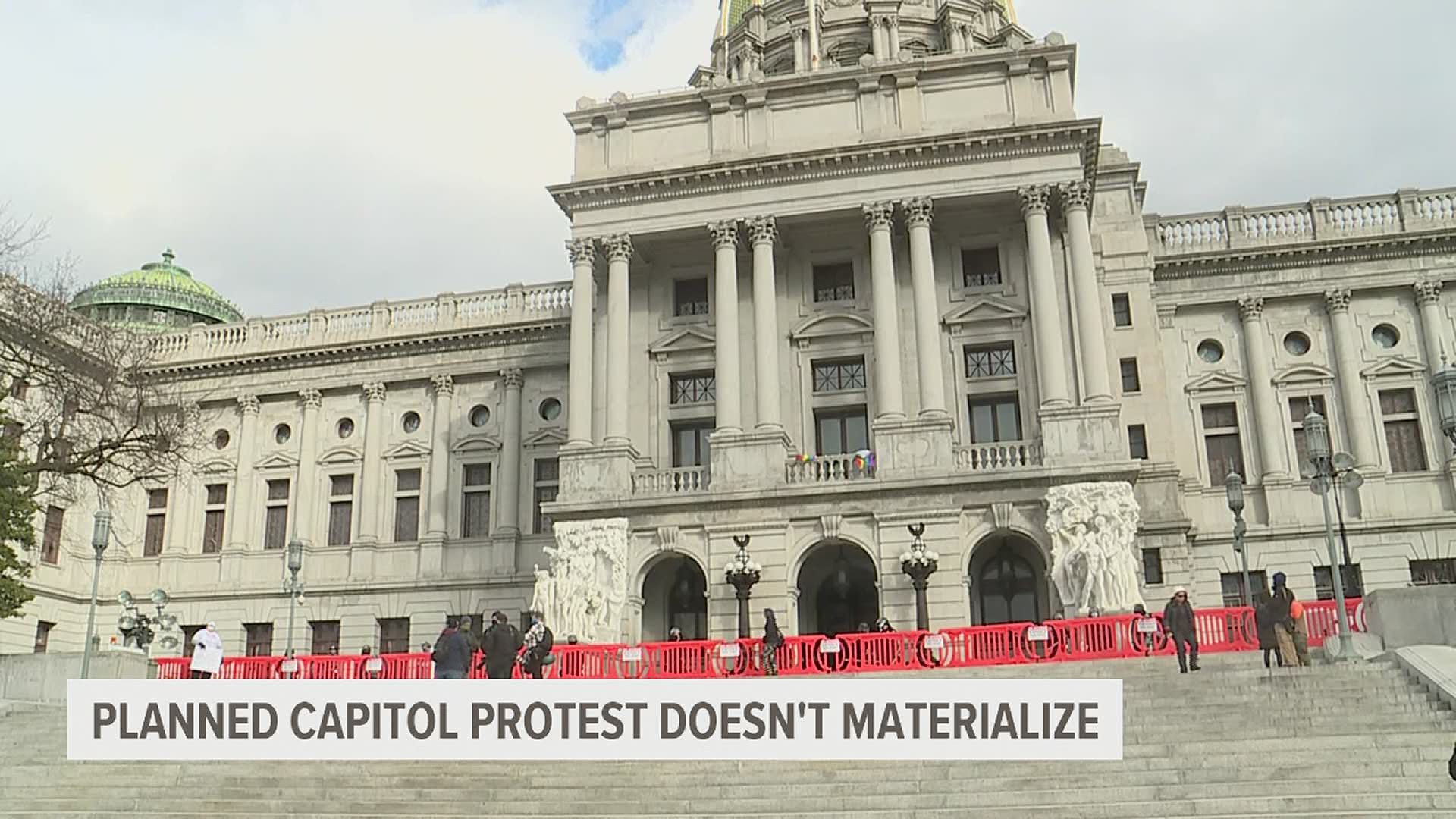 Small groups of right-wing protesters — some of them carrying rifles — gathered outside heavily fortified statehouses around the country Sunday, outnumbered by National Guard troops and police brought in to prevent a repeat of the violence that erupted at the U.S. Capitol. As darkness fell, there were no reports of any clashes.

Security was stepped up in recent days after the FBI warned of the potential for armed protests in Washington and at all 50 state capitol buildings ahead of President-elect Joe Biden's inauguration on Wednesday.

Crowds of only a dozen or two demonstrated at some boarded-up, cordoned-off statehouses, while the streets in many other capital cities remained empty. Some protesters said they were there to back President Donald Trump. Others said they had instead come to voice their support for gun rights or decry government overreach.

“I don’t trust the results of the election,” said Michigan protester Martin Szelag, a 67-year-old semi-retired window salesman from Dearborn Heights. He wore a sign around his neck that read, in part, “We will support Joe Biden as our President if you can convince us he won legally. Show us the proof! Then the healing can begin.”

As the day wore on with no bloodshed around the U.S., a sense of relief spread among officials, though they were not ready to let their guard down.

The heavy law enforcement presence may have kept turnout down. In the past few days, some extremists had warned others against falling into what they called a law enforcement trap.

“I would love to say that it’s because we’ve all taken a sober look in the mirror and have decided that we are a more unified people than certain moments in time would indicate,” he said.

The security measures were intended to safeguard seats of government from the type of violence that broke out at the U.S. Capitol on Jan. 6, when far-right Trump supporters galvanized by his false claims that the election had been stolen from him overran the police and bashed their way into the building while Congress was certifying the Electoral College vote.

The attack left a Capitol police officer and four others dead. More than 125 people have been arrested over the insurrection.

Dozens of courts, election officials and Trump’s own attorney general have all said there was no evidence of widespread fraud in the presidential race.

On Sunday, some statehouses were surrounded by new security fences, their windows were boarded up, and extra officers were on patrol. Legislatures generally were not in session over the weekend.

Tall fences also surrounded the U.S. Capitol. The National Mall was closed to the public, and the mayor of Washington asked people not to visit. Some 25,000 National Guard troops from around the country are expected to arrive in the city in the coming days. U.S. defense officials told The Associated Press those troops would be vetted by the FBI to ward off any threat of an insider attack on the inauguration.

The roughly 20 protesters who showed up at Michigan’s Capitol, including some who were armed, were significantly outnumbered by law enforcement officers and members of the media. Tensions have been running high in the state since authorities foiled a plot to kidnap Democratic Gov. Gretchen Whitmer last year.

At the Ohio Statehouse, about two dozen people, including several carrying long guns, protested outside under the watchful eyes of state troopers before dispersing as it began to snow.

Credit: AP
Protestors carrying guns and flags stand outside the Ohio Statehouse Sunday, Jan. 17, 2021, in Columbus, Ohio. Security was stepped up at statehouses across the U.S. after FBI warnings of potential armed protests at all 50 state capitols and in Washington, D.C. (AP Photo/Jay LaPrete)

Kathy Sherman, who was wearing a visor with “Trump” printed on it, said she supports the president but distanced herself from the mob that breached the U.S. Capitol.

"I’m here to support the right to voice a political view or opinion without fear of censorship, harassment or the threat of losing my job or being physically assaulted,” she said.

Ohio Gov. Mike DeWine, a Republican, said he was pleased with the outcome but stressed that authorities "continue to have concerns for potential violence in the coming days, which is why I intend to maintain security levels at the Statehouse as we approach the presidential inauguration.”

Utah's new governor, Republican Spencer Cox, shared photos on his Twitter account showing him with what appeared to be hundreds of National Guard troops and law enforcement officers standing behind him, all wearing masks. Cox called the quiet protests a best-case scenario and said many ”agitating groups" had canceled their plans for the day.

At Oregon's Capitol, fewer than a dozen men wearing military-style outfits, black ski masks and helmets stood nearby with semiautomatic weapons slung across their bodies. Some had upside-down American flags and signs reading such things as “Disarm the government.”

At the Texas Capitol, Ben Hawk walked with about a dozen demonstrators up to the locked gates carrying a bullhorn and an AR-15 rifle hanging at the side of his camouflage pants. He condemned the insurrection at the U.S. Capitol and said he did not support Trump.

“All we came down here to do today was to discuss, gather, network and hang out. And it got blown and twisted completely out of proportion,” Hawk said.

At Nevada's Capitol, where demonstrators supporting Trump have flocked most weekends in recent months, all was quiet except for a lone protester with a sign.

More than a third of governors had called out the National Guard to help protect their capitols and assist local law enforcement. Several governors declared states of emergency, and others closed their capitols to the public until after Biden's inauguration.

Some legislatures also canceled sessions or pared back their work for the coming week.

Even before the violence at the Capitol, some statehouses had been the target of vandals and angry protesters during the past year.

Last last month, crowds in Oregon forced their way into the Capitol in Salem to protest its closure to the public during a special legislative session on coronavirus measures.

Amid the potential for violence in the coming days, the building's first-floor windows were boarded up and the National Guard was brought in.

"The state Capitol has become a fortress,” said Oregon Senate President Peter Courtney, a Democrat. “I never thought I’d see that. It breaks my heart.”