Workers from the service industry, fast-food chains and the gig economy are rallying with organized labor to protest systemic and economic racism. 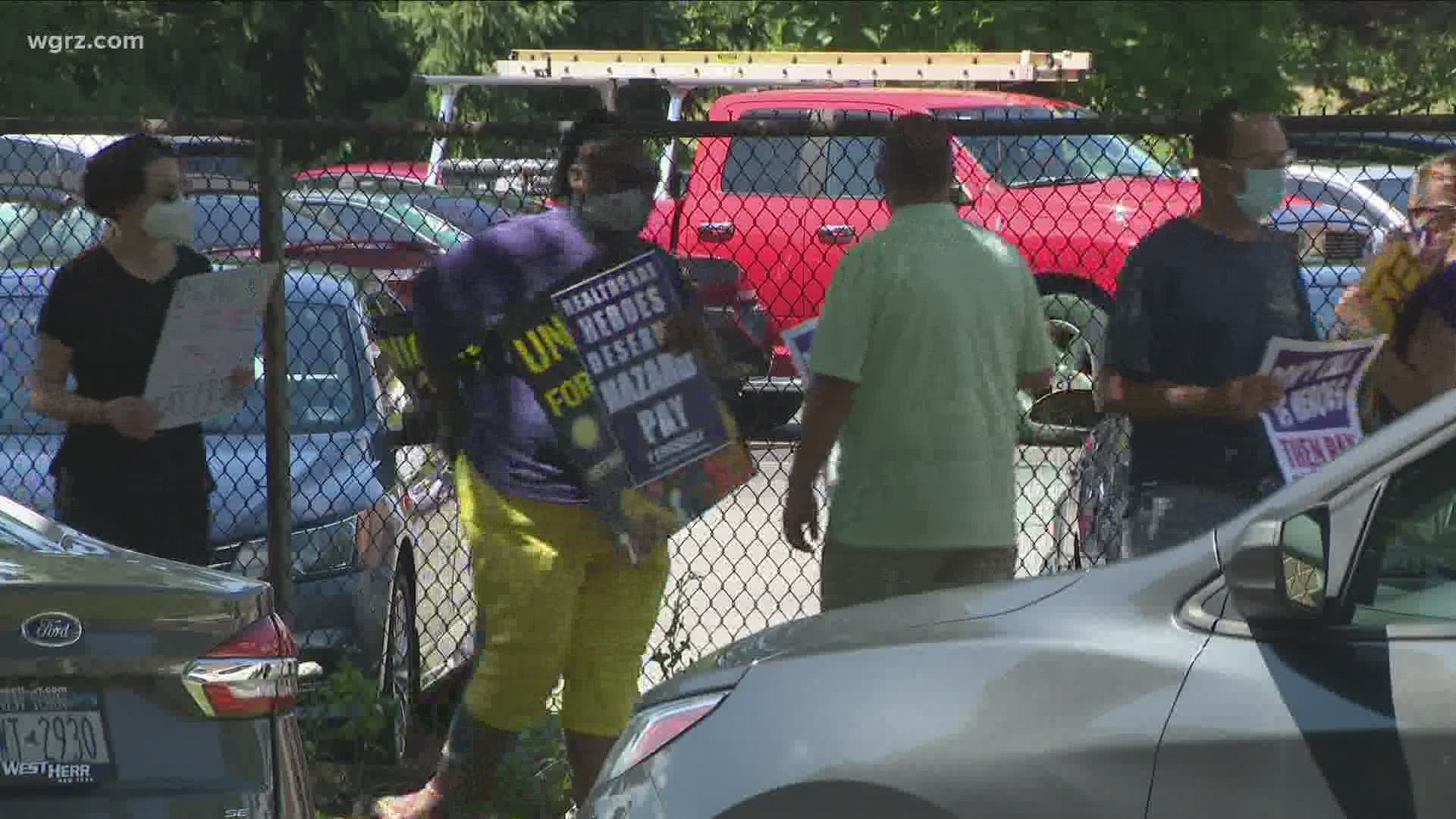 NEW YORK — Workers from the service industry, fast-food chains and the gig economy rallied with organized labor Monday to protest systemic racism and economic inequality, staging demonstrations across the U.S. and around the world seeking better treatment of Black Americans in the workplace.

Organizers said tens of thousands of workers in 160 cities walked off the job for strikes inspired by the racial reckoning that followed the deaths of several Black men and women who died at the hands of police. Visible support came largely in the form of protests that drew people whose jobs in health care, transportation and construction do not allow them to work from home during the coronavirus pandemic.

“What the protesters are saying, that if we want to be concerned — and we should be — about police violence and people getting killed by the police ... we have to also be concerned about the people who are dying and being put into lethal situations through economic exploitation all over the country,” the Rev. William Barber II, co-chair of the Poor People’s Campaign, one of the organizations that partnered to support the strike, told The Associated Press.

RELATED: Man who marched for civil rights in 1968 and 2020 talks about what has changed over time

Barber said Monday’s turnout showed the importance of the issue to the people who are willing to come out during a pandemic to make their voices heard.

“Sadly, if they’re not in the streets, the political systems don’t move because when you just send an email or a tweet. They ignore it," he said.

The “Strike for Black Lives” was organized or supported by more than 60 labor unions and social and racial justice organizations, which held a range of events in more than two dozen cities. Support swelled well beyond expectations, organizers said, although a precise participation tally was not available.

Where work stoppages were not possible for a full day, participants picketed during a lunch break or observed moments of silence while kneeling to honor police brutality victims including George Floyd, a Black man killed in Minneapolis police custody in late May.

At one McDonald's location in Los Angeles, workers blocked the drive-thru for 8 minutes and 46 seconds, about the amount of time that prosecutors say a white police officer held his knee on Floyd's neck as he pleaded for air.

Glen Brown, a 48-year-old wheelchair agent at the Minneapolis-St. Paul International Airport for nearly five years, said his job does not give him the option of social distancing. Brown and fellow workers called for a $15 minimum wage during an event in St. Paul, and he said workers were “seizing our moment” to seek change.

“We are front-line workers, (and) we are risking our lives, but we’re doing it at a wage that doesn’t even match the risk,” Brown said.

In Manhattan, more than 150 union workers rallied outside Trump International Hotel to demand that the Senate and President Donald Trump adopt the HEROES Act, which provides protective equipment, essential pay and extended unemployment benefits to workers who cannot work from home. It has already been passed by the House.

Elsewhere in New York City and in New Jersey and Connecticut, organizers said 6,000 workers at 85 nursing homes picketed, walked off the job or took other actions to highlight how predominantly Black and Hispanic workers and the nursing home residents they serve have been put at risk without proper protective gear during the pandemic.

In Massachusetts, about 200 people, including health care workers, janitors and other essential employees, joined Democratic candidates for U.S. Senate in front of the Statehouse in Boston.

“We’re just being overworked and underpaid, and it makes you sometimes lose your compassion,” said Toyai Anderson, 44, who intended to walk off her job as a nursing aide for two hours at Hartford Nursing and Rehab Center in Detroit. “It makes me second guess if I am sure this is my calling.”

After 13 years on the job, Anderson makes $15.75 an hour. Nationally, the typical nursing aide makes $13.38, according to health care worker advocacy group PCI, and 1 in 4 nursing home workers is Black.

Hundreds of other workers walked off their jobs at six Detroit nursing homes, according to the Service Employees International Union. The workers are demanding higher wages and more safety equipment to keep them from catching and spreading the virus, as well as better health care benefits and paid sick leave.

Across the nation, participants broadly demanded action by corporations and government to confront racism and inequality that limits mobility and career advancement for many Black and Hispanic workers, who make up a disproportionate number of those earning less than a living wage.

In South Korea, members of a transport workers’ union passed a resolution in support of the strike, raised their fists and chanted “Black lives matter” in Korean and “No justice, no peace" in English.

In Brazil, McDonald’s workers rallied outside the company’s flagship restaurant in Sao Paolo. The two largest Brazilian labor federations, together representing more than 24 million workers, filed a complaint with a national prosecutor describing examples of structural racism at the company.

Justice Favor, 38, an organizer with the Laborers’ International Union Local 79, which represents 10,000 predominately Black and Hispanic construction workers in New York City, said he hopes that the strike motivates more white workers to acknowledge the existence of racism and discrimination in the workplace.

“There was a time when the Irish and Italians were a subjugated people, too,” said Favor, who is Black. “How would you feel if you weren’t able to fully assimilate into society? Once you have an open mind, you have to call out your coworkers who are doing wrong to others.”

Associated Press reporters around the U.S. contributed to this report.