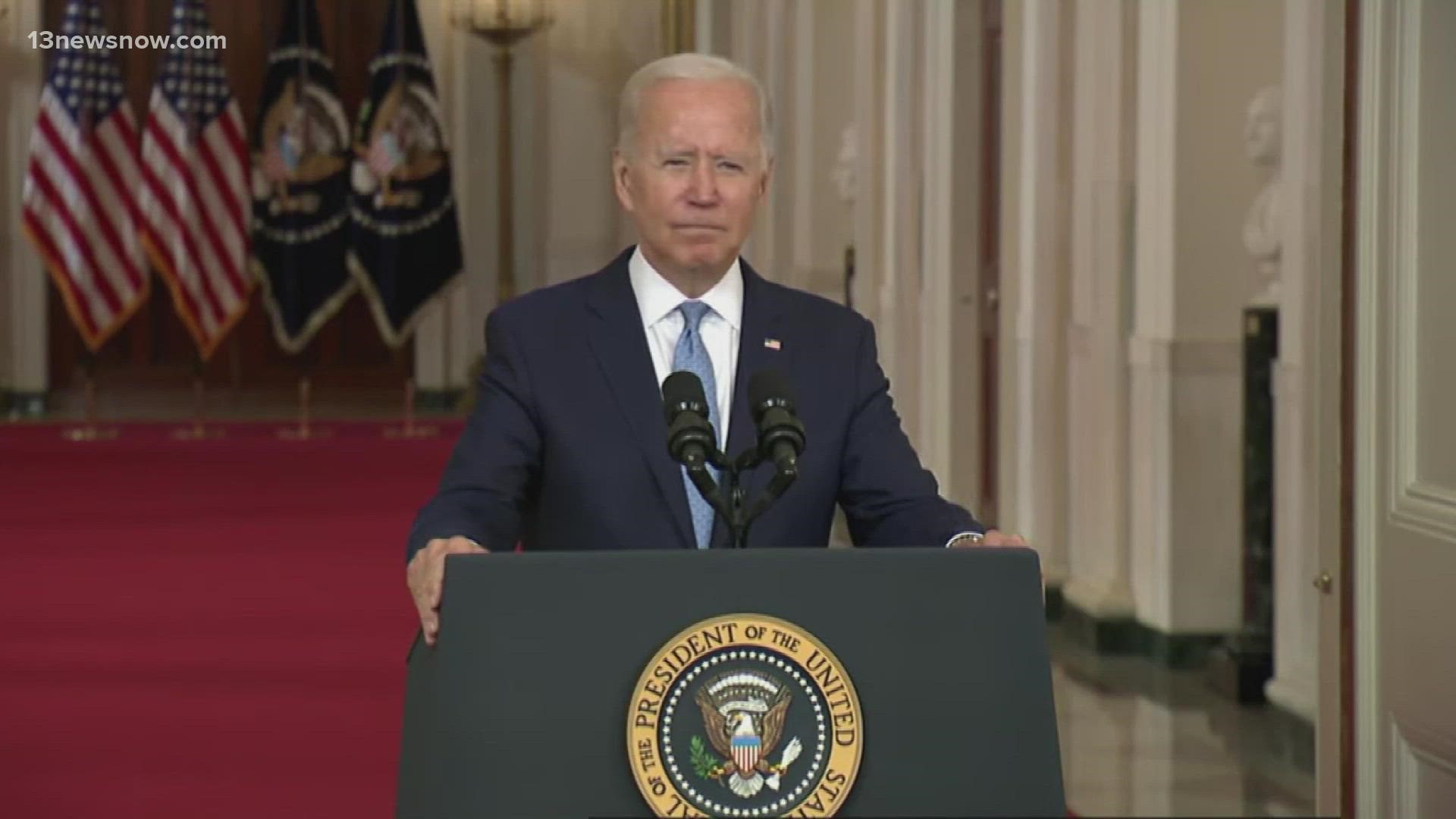 WASHINGTON — President Joe Biden used his first meeting with a foreign leader since ending the war in Afghanistan to send the message Wednesday that the United States — unburdened of its “forever war” — is determined to become a more reliable ally to its friends, in this case Ukraine.

Biden played host to Ukrainian President Volodymyr Zelenskyy for a long-sought Oval Office meeting and tried to reassure him that his administration remains squarely behind the Eastern European nation.

Biden didn't mention Afghanistan in his brief appearance with Zelenskyy before cameras.

But he highlighted his concerns about Russian aggression in the region. Biden, in making his case to end the war in Afghanistan, repeatedly said winding down the 20-year conflict would allow the U.S. to put greater focus on combating malevolent acts from adversaries Russia and China.

“The United States remains firmly committed to Ukraine's sovereignty and territorial integrity in the face of Russian aggression and for Ukraine's Euro-Atlantic aspirations,” Biden said.

The Ukrainian leader, who had found himself ensnarled in Donald Trump’s first impeachment, arrived at the White House looking to Biden for increased military aid and backing for his country’s bid for NATO membership.

The meeting was postponed two days while Biden and his national security team were consumed by the American military withdrawal from Afghanistan. The withdrawal, which concluded Monday, left behind many Afghans who had worked with the Americans and their allies and who now fear Taliban rule. This led to criticism that the U.S. was less than a reliable international partner, something Biden was eager to counter.

The optics of the moment did not go unnoticed by the Ukrainian president, who is looking to strengthen his country's relationship with the U.S.

“At a difficult time for the world and the United States ... still you found time for us and we're thankful for this indeed,” Zelenskyy said.

In advance of the sit-down, the Biden administration said it was committing up to $60 million in new military aid to Ukraine. The administration said in a notification to Congress that the aid package for Ukraine was necessary because of a “major increase in Russian military activity along its border” and because of mortar attacks, cease-fire violations and other provocations.

In their private talks, Zelenskyy was expected to bring up Washington’s decision not to block the construction of the Nord Stream 2 pipeline, which would carry Russian natural gas directly to Germany, bypassing Ukraine. The pipeline is vehemently opposed by Ukraine and Poland as well as both Republicans and Democrats in Congress, with Zelenskyy describing it as a powerful geopolitical weapon for Russia.

Zelenskyy, a television actor new to politics, took office in May 2019 anxious to firm up his country’s relationship with the United States. Instead, he almost immediately found himself under pressure from Trump envoys and soon Trump himself, who in the phone call that led to his first impeachment asked Zelenskyy to “do us a favor.”

In that now famous July 2019 call, Trump asked Zelenskyy to investigate Biden and his son Hunter, who had served on the board of a Ukrainian energy company.

“Was there a ‘quid pro quo?’” Sondland asked. “With regard to the requested White House call and White House meeting, the answer is yes.”

Besides the coveted invitation to the White House, Sondland also said it was his understanding that Trump was holding up nearly $400 million in military aid until Ukraine announced the investigation.

Allegations that Trump withheld congressionally approved military aid while seeking Ukraine’s help for his reelection campaign formed the basis of the the first impeachment case against him. Trump was acquitted by the Senate. The Oval Office meeting with Zelenskyy never happened.

With Biden, Zelenskyy now has a president with a long history of involvement in Ukraine, one who has supported its determination to break free from Russia, shore up its young democracy and be more fully welcomed into the Western club.

As vice president, Biden was the Obama administration’s point person on Ukraine and pushed for tougher action against corruption. He once boasted of his success in getting Ukraine to fire its top prosecutor, who had blocked some corruption investigations. Trump later twisted this by insisting, wrongly, that Biden had done so to protect his son and the energy company on whose board he served.

Zelenskyy is the latest Ukrainian president to promise to tackle systemic corruption and then struggle once in office. On Wednesday, Biden will want assurances that Zelenskyy remains committed to following through on various reforms, a senior U.S. administration official said.

Zelenskyy also is looking for greater economic and military assistance as Ukraine faces a hostile Russia on its eastern border. And he has said he wants a clear statement from Biden on whether he supports eventual NATO membership for Ukraine. NATO members are wary given Ukraine’s simmering conflict with Russia.

The $60 million security package will include more Javelin anti-tank missiles, which Kyiv sees as critical to defending against the Russia-backed separatists who have rolled through eastern Ukraine. The U.S. has overall committed more than $400 million in military aid this year.

White House press secretary Jen Psaki would not say Wednesday whether Biden would support Ukraine’s NATO aspirations. She noted that it was not a decision the U.S. could make alone and said the U.S. remains supportive of Ukraine's efforts to reform its defense sector and take other steps necessary before it can be put on a path toward NATO membership.

Biden and Zelenskyy would have “significant” discussions on the status of Ukraine’s various reforms and what still needs to be done, a senior administration official said. This includes steps to protect the independence of the anti-corruption agency, legislation on human rights and other efforts to strengthen democracy. The U.S. will be looking for “concrete results,” said the official, who briefed reporters before the meeting on the condition of anonymity.

Nord Stream 2, the pipeline being built under the Baltic Sea, was also on the agenda. By allowing Russia to bypass Ukraine, it could potentially deprive Ukraine of the billions of dollars in transit fees it now earns for pumping Russian gas to Europe.

While the U.S. also opposes the new pipeline, worried that it would give Russia too much power over European energy supplies, Biden agreed in July not to penalize the German company overseeing the project.