AP FACT CHECK: Rhetoric from Trump, Biden in the non-debate

Here's how some of the rhetoric Thursday night compared with the facts in the prime-time events and a day of campaigning: 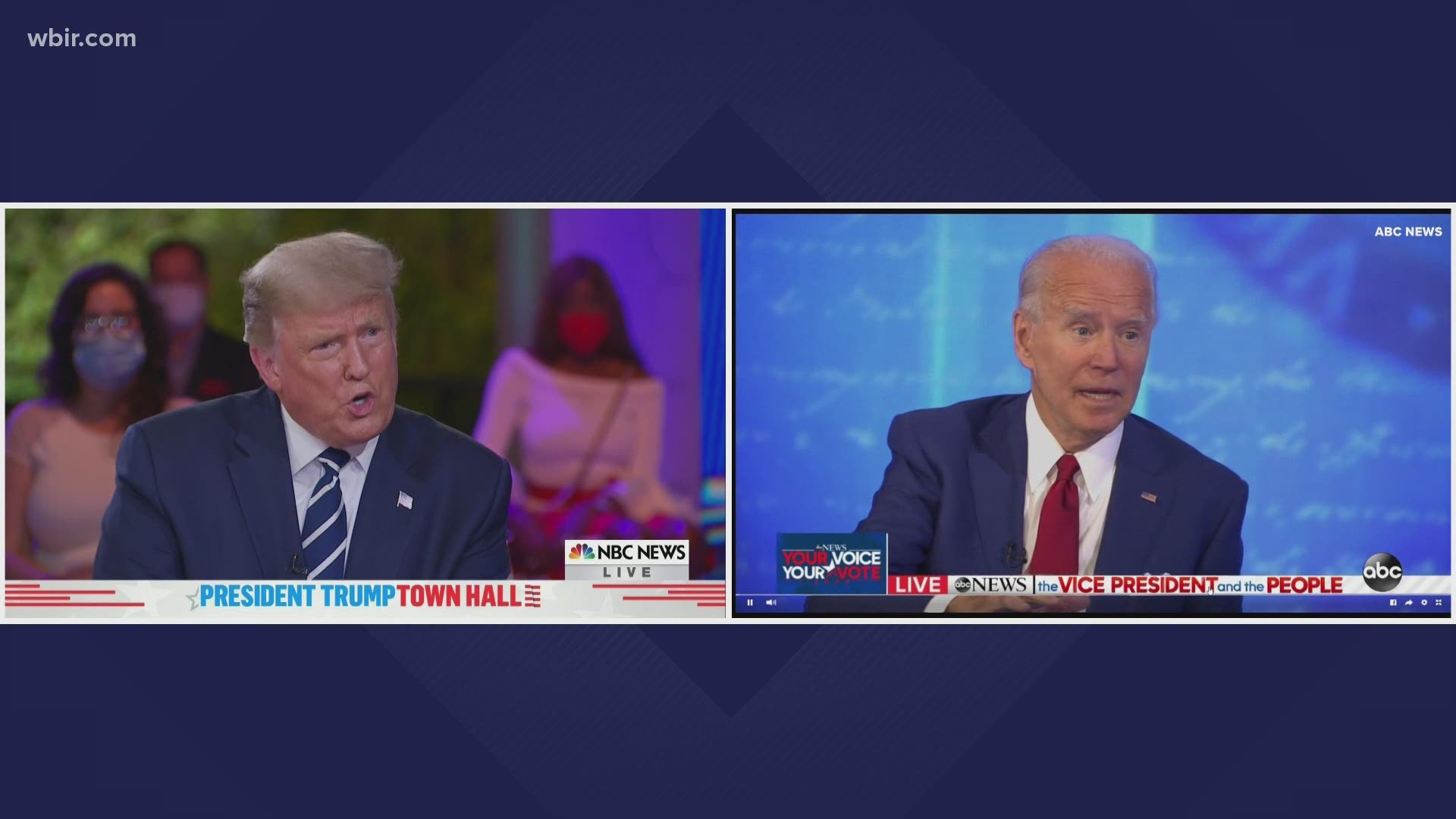 WASHINGTON — President Donald Trump and Democratic rival Joe Biden faced inquisitive voters on separate stages in different cities in a substitute for the debate that was meant to be.

Here's how some of the rhetoric Thursday night compared with the facts in the prime-time events and a day of campaigning:

TRUMP, answering questions in Miami on NBC: “We had the greatest economy in the history of our country.”

THE FACTS: The numbers show it wasn’t the greatest in U.S. history.

Did the U.S. have the most jobs on record before the coronavirus pandemic? Sure, the population had grown. The 3.5% unemployment rate before the recession was at a half-century low, but the percentage of people working or searching for jobs was still below a 2000 peak.

Nobel Prize-winning economist Paul Romer looked at Trump’s economic growth record this month. Growth under Trump averaged 2.48% annually before the pandemic, only slightly better than the 2.41% gains achieved during Barack Obama’s second term. By contrast, the economic expansion that began in 1982 during Ronald Reagan’s presidency averaged 4.2% a year.

So Trump is wrong.

TRUMP: “When I see thousands of ballots dumped in a garbage can and they happen to have my name on it? I’m not happy about it.” — from Miami.

THE FACTS: Nobody has seen that. Contrary to Trump’s repeated, baseless attacks on voting security, voting and election fraud is vanishingly rare. No cases involving thousands of ballots dumped in the trash have been reported in this election.

Trump has cited a case of military ballots marked for him being thrown in the trash in Pennsylvania as evidence of a possible plot to steal the election. But he leaves out the details: County election officials say that the seven ballots, along with two unopened ones, were accidentally tossed in an elections office in a Republican-controlled county by a contract worker and that authorities were swiftly called.

In the five states that regularly send ballots to all voters, there have been no major cases of fraud or difficulty counting the votes.

BIDEN, answering questions in Philadelphia on ABC: “The crime bill itself did not have mandatory sentences, except for two things, it had three strikes and you’re out, which I voted against in the crime bill.”

THE FACTS: That’s misleading. He is understating the impact of the bill and the influence he brought to bear in getting it passed into law.

Biden wrote and voted for that sweeping 1994 crime bill, which included money for more prisons, expanded the use of the federal death penalty and called for a mandatory life sentence for three-time violent offenders – the so-called three strikes provision.

He did call the three-strikes rule “wacko” at one point, even as he was helping to write the bill. Whatever his reservations about certain provisions, he ultimately voted for the legislation, which included the three-strikes rule and has come to be seen in the Black Lives Matter era as a heavy-handed and discriminatory tool of the justice system.

BIDEN in Philadelphia, on U.S. troops in Afghanistan: “They have more people there now, by the way, than when I left, when we left in Afghanistan.”

THE FACTS: Not so.

The number of troops in Afghanistan reached 100,000 in 2010, before Obama took office. Obama did withdraw thousands of troops during his two terms, but he was unable to fulfill promises to decrease the number of troops to 5,500 toward the final years of his presidency.

TRUMP: "Just the other day they came out with a statement that 85% of the people that wear masks catch it so ... that’s what I heard and that’s what I saw.” — town-hall event in Miami.

TRUMP, looking out over his crowd: “Look at all the masks. You know, they keep saying, ‘nobody wears a mask, wear the mask.’ Although then they come out with things today. Did you see CDC? That 85% of the people wearing a mask catch it, OK?” — remarks at rally during the day in Greenville, North Carolina.

THE FACTS: He's botching the study's findings, repeatedly. The study cited, by the Centers for Disease Control and Prevention, did not find that 85% of mask wearers catch COVID-19. If that were the case, the majority of Americans would be infected.

It found something quite different: that 85% of the small group of COVID-19 patients surveyed — about 150 on this question — reported they had worn a mask often or always around the time they would have become infected.

The group's exposure to potentially infected people in the community varied. Most reported shopping or being in a home with multiple people. But they were twice as likely to have eaten at a restaurant, where masks are set aside for the meal, than were uninfected people in a control group.

Most studies have shown that wearing masks reduces the transmission of the virus by blocking respiratory droplets. Several studies have also shown that masks could offer some protection for the people who wear them.

The findings were in a CDC Morbidity and Mortality Weekly Report, published last month.

TRUMP, reacting to the news that people associated with the Biden campaign on a recent flight with Harris tested positive for COVID-19: “We extend our best wishes, which is more than they did to me, but that’s OK.” — Greenville rally.

Hours after Trump’s early morning announcement on Oct. 2 that he had tested positive, both Biden and Harris sent their wishes for a quick recovery via Twitter.

“Jill and I send our thoughts to President Trump and First Lady Melania Trump for a swift recovery,” Biden wrote. “We will continue to pray for the health and safety of the president and his family.”

Harris tweeted a similar message “wishing President Trump and the First Lady a full and speedy recovery. We’re keeping them and the entire Trump family in our thoughts.”

The Biden campaign at the time also announced it would stop running negative ads, with the candidate tweeting that “this cannot be a partisan moment” after the news that Trump was going to Walter Reed National Military Medical Center for treatment of his coronavirus infection. Biden’s camp resumed the advertising after Trump was released from Walter Reed.

At least three people connected to Biden’s campaign have tested positive for the coronavirus, leading the campaign to suspend in-person events for Harris through Monday.

RELATED: On #MeToo anniversary, leaders say focus is on inequality

►  Vote! and stay on the top of the election by tuning in to WWLTV, downloading the FREE WWL-TV News app now in the IOS App Store or Google Play, following us on Facebook or Twitter, or by going to WWLTV.com