Thomas Baranyi is charged with disorderly conduct and violent entry of a restricted building. 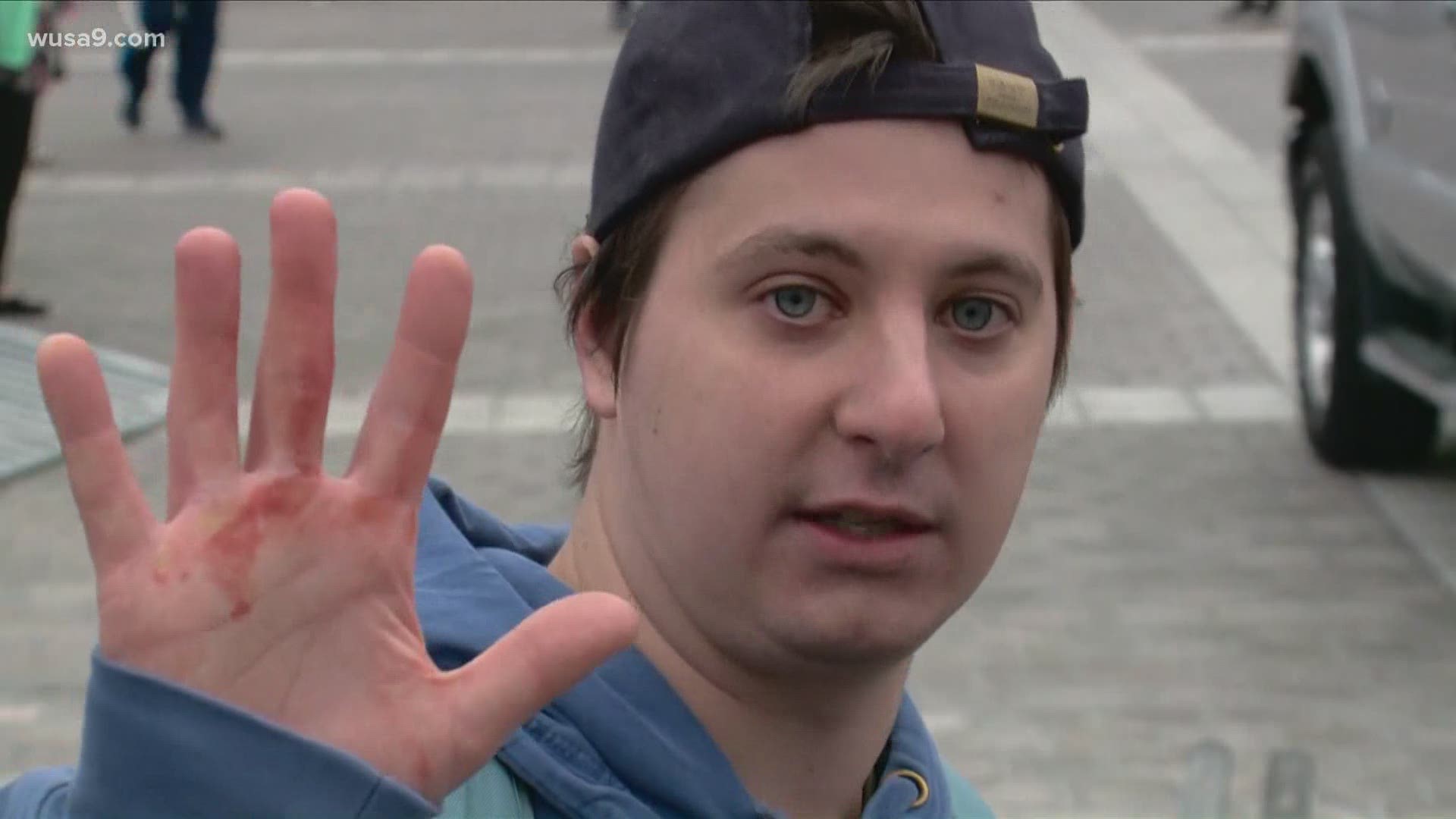 WASHINGTON — A New Jersey man who admitted on camera to being part of the mob that attacked the U.S. Capitol on Jan. 6 and claiming to have witnessed a woman being shot by police has been arrested.

Thomas Baranyi is charged with disorderly conduct and violent entry of a restricted building. He was interviewed by WUSA9's Ariane Datil immediately following the insurrection, and in the interview, he states his full name and state of residence before sharing details about how he gained access to the building.

"We tore through the scaffolding, through flash bangs and tear gas and blitzed our way in through all the chambers just trying to get into Congress," Baranyi said.

The 28-year-old showed Datil and her camera blood on his hand, which he claims was the blood of 35-year-old Ashli Babbit who was fatally shot by Capitol Police.

"We had stormed into the chambers inside and there was a young lady who rushed through the windows," he said. "A number of police and Secret Service were saying 'get down, get out of the way.' She didn’t heed the call and as we kind of raced up to try to grab people and pull them back, they shot her in the neck, and she fell back on me.”

"It could have been me, but she went in first," Baranyi said.

The FBI cites WUSA9's interview with Baranyi in a criminal affidavit, using many of his quotes from the interview as reasoning to issue an arrest warrant. Baranyi has been released on an unsecured bond.

Our sister station in San Diego, KMFB, spoke with Babbit's husband, Aaron, who said videos he’s seen of the woman who was shot is his wife, Ashli.

Her husband said Ashli went to D.C. by herself and he was supposed to pick her up from the airport on Friday. He tells KFMB that Ashli served in the U.S. Air Force for 12 years. The two met in D.C. back when Ashli was in the National Guard and lived in the Maryland area. State documents showed she and her husband owned a pool service company in California.

Babbitt was outspoken on social media about her support for President Donald Trump. Her Twitter was occupied with many posts about MAGA, including a tweet one day before the riots that said, "Nothing will stop us. They can try and try and try but the storm is here." 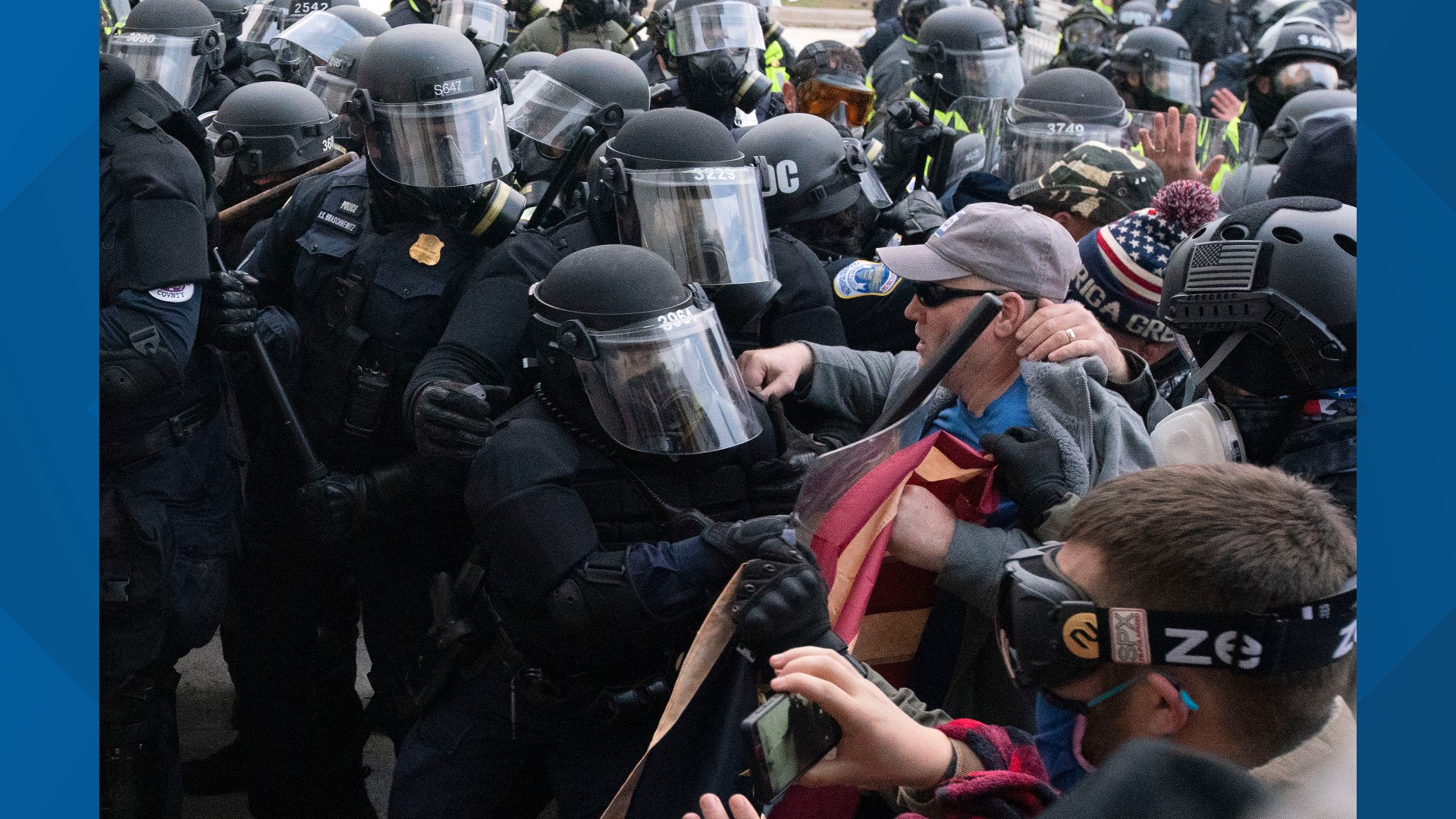 Thousands of Trump supporters surrounded the U.S. Capitol following a rally on the National Mall to protest unfounded claims of election fraud in which the President told the crowd to “fight like hell”, and that if they didn’t they were “not going to have a country anymore.”

The mob forced its way in while a joint session of Congress led by Vice President Mike Pence was being held to certify the electoral college vote, confirming Joe Biden’s presidency. The rioters smashed windows, pushed back police lines and scaled the walls of the Capitol, gaining entry as far as the House and Senate Chambers where the historic vote had been happening just minutes before.

The looters ransacked offices of leaders like Speaker of the House Nancy Pelosi and damaged or stole property throughout the complex.

The building was locked down for more than 4 hours, key members of government were ushered away by armed security to safe locations while other Congressmen and women and their aides barricaded in their offices, fearful for their safety.

More than 40 people have been charged with federal crimes, but the FBI is still working to identify many other rioters. Anyone with tips can call 1-800-225-5324) or submit images or videos at fbi.gov/USCapitol.

1 / 11
FBI
Anyone with information regarding these individuals, or anyone who witnessed any unlawful violent actions at the Capitol or near the area, is asked to contact the FBI's Toll-Free Tipline at 1-800-CALL-FBI (1-800-225-5324) to verbally report tips