Barrett nomination could shift Supreme Court dramatically to the right

If confirmed, the 48-year old federal appeals court judge would be the youngest justice and give the high court a 6-3 conservative majority. 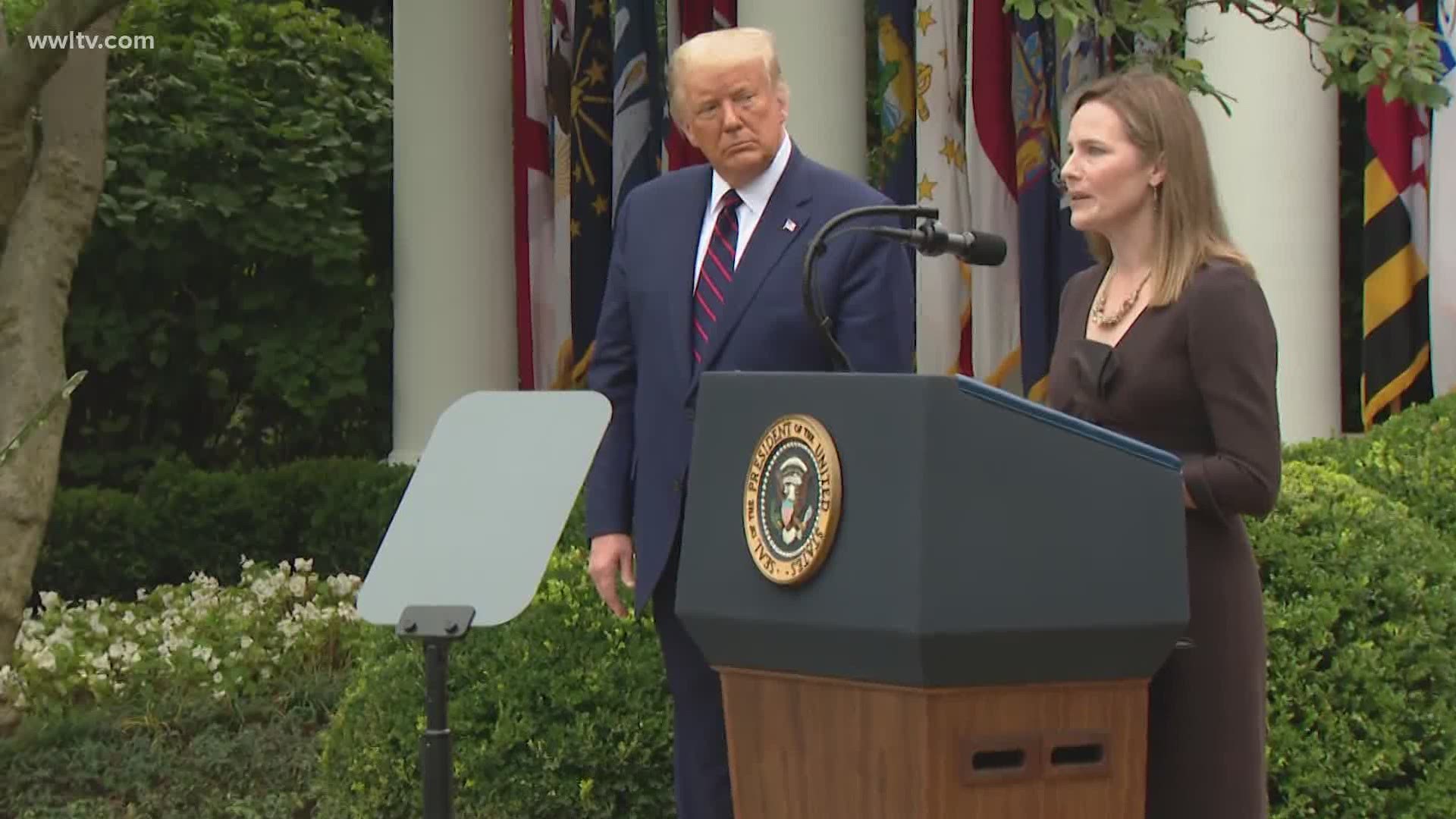 If confirmed, the 48-year old federal appeals court judge would be the youngest justice and give the high court a 6-3 conservative majority. Barrett is considered a solid social conservative: a Catholic who is pro-Second Amendment, anti-abortion and a critic of the Affordable Care Act, also known as Obamacare. She may be a stark contrast to Ruth Bader Ginsburg, but Judge Barrett on Saturday recognized the late justice’s impact on the court and the country.

“She not only broke glass ceilings, but she also smashed them. For that, she has won the admiration of women across the country and indeed all over the world,'' said Judge Barrett.

With sarcasm, President Trump predicted a smooth path to confirmation.

“It should be very easy, very easy. It’s going to be very quick. I'm sure it will be non-controversial. Well, that’s what we said the last time,” said President Trump.

Democrats say Republicans are hypocritical in their attempt to ram this confirmation through just weeks before the election. They point to the successful Republican effort to block President Obama’s nominee for the SCOTUS four years ago. Back then with roughly eight months before the 2016 election, Republicans claimed it was much too close to the election to hold confirmation hearing.

''They are violating the essence of what the founders thought that the voters should have a chance to make if they have a say the election has already begun,” said Democratic Presidential nominee Joe Biden.

“I would expect a lot of litigation on abortion rights. I’m not so sure it puts in jeopardy the ACA case because the legal arguments in that case are pretty weak,” said Professor Griffin.

Professor Griffin said if the nomination is confirmed, its reach could stretch well beyond the President’s time in office. Griffin said the direction of the court could swing with the replacement of a justice long considered liberal by one that is conservative. Griffin says not only could rulings by the court be determined by the conservative majority, but also what cases go before the court.

For many in Louisiana, there is pride with the nomination. Amy Coney Barrett is a native of Metairie and went to St. Mary’s Dominican high school. She spoke about her local roots in an interview in 2019.

“I loved the high school that I attended. I loved being at an all-girls school. It was I think very freeing. I formed really close friendships,” said Barrett at the interview at Notre Dame University.

It’s safe to assume there will be no feelings of friendship between Republicans and Democrats during the confirmation process. Senate Republicans believe they’ve secured enough votes to confirm the President’s pick. A professor, judge and mother from Metairie may soon carry the title of U.S. Supreme Court Justice.