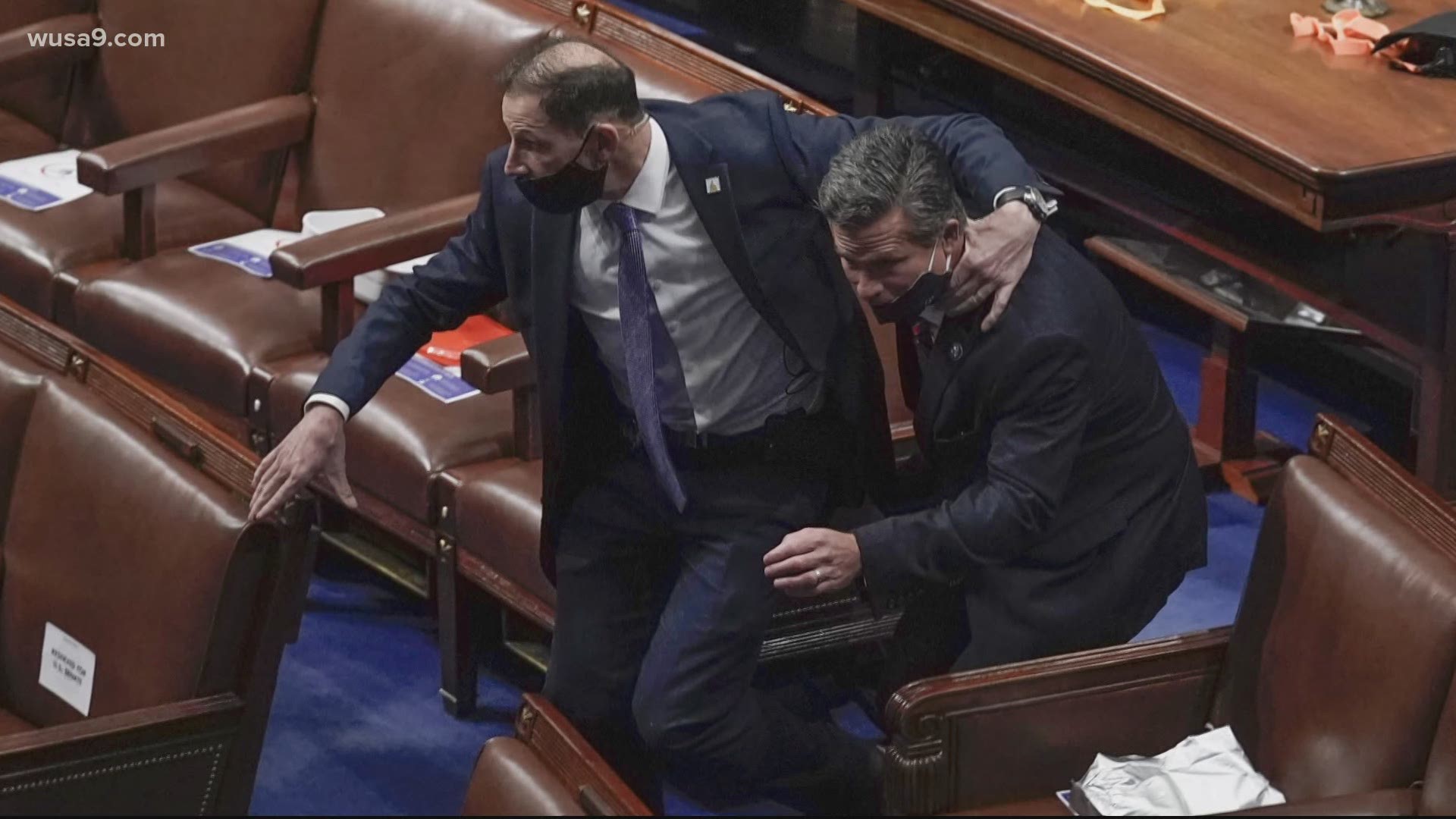 WASHINGTON — America's elected lawmakers were trapped in the very chamber where they debate the country's most pressing issues.

Democracy was literally under siege.

Speaker of the House Nancy Pelosi (D-CA), along with Majority Leader Steny Hoyer (D-MD) and Majority Whip Jim Clyburn (D-SC) were quickly ushered out of the House chamber by security personnel as the mob penetrated the Capitol building.

"I saw a phalanx of security personnel escort really rapidly (the leaders) off the floor. Very fast," said Rep Gerry Connolly (D-VA). "In fact, so fast that Nancy Pelosi left her phone, her iPhone, on the dais. Because there was no time for any preparation just get out and get them secure. She, after all, is second in line to the presidency."

Dozens of other lawmakers, staff and journalists remained behind.

Congressman Connolly was among them.

🚨 ALL NEW 🚨
This is EXACTLY what happened on the floor of the House of Representatives yesterday.
This is not the script of a @michaelbay movie.
Listen to Congressman @GerryConnolly @wusa9 pic.twitter.com/zCqOHA7kNX

After the leaders were ushered out of the room, business briefly resumed as another member of Congress became the presiding officer over the chamber, according to Connolly.

But shortly after that, in an unprecedented move, an unidentified officer ascended to the dais and made a startling announcement to those who were present.

Incredible photos from inside the House chamber during the Capitol siege. @wusa9 pic.twitter.com/Cj276ljXsr

"We want you to get access to your gas masks which are under the chairs in the chamber," Connolly recounted.

There are gas masks stowed underneath the seats in the chamber for emergency purposes, much like the inflatable devices underneath airplane seats.

Several more tense moments passed then the group was addressed by the officer once again.

"That police officer came back and said we need to evacuate the chamber immediately," said Connolly. "We had only one escape route down to the basement to the tunnels."

Connolly said he was one of the last people to evacuate the House chamber.

"I turned to my left as I was leaving the house chamber and I saw the mob right there at the doors. Breaking the windows, pounding on the doors. They were trying to get into the House chamber," said Connolly.

The members fled into the tunnels beneath the Capitol with the remaining security team, staffers and journalists who had been in the House chamber. They took shelter in an unidentified location in one of the House office buildings across the street from the Capitol.

"Even that was menacing because now you've got 150 members of Congress, staff and press all in one room, all in one place. A juicy target for the mob," said Connolly. "And had that location been revealed or discovered, I think the results would have been quite nightmarish."