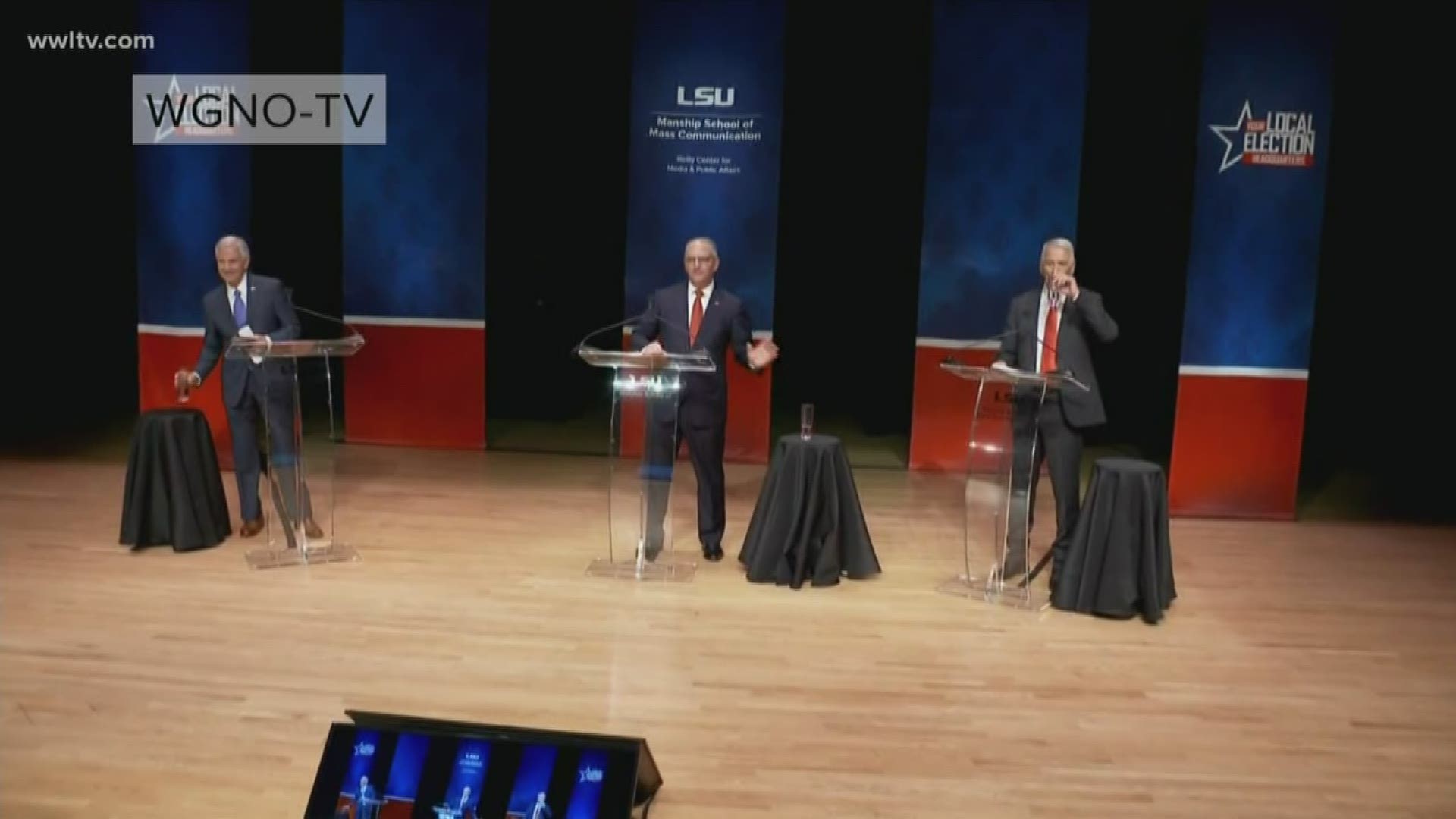 BATON ROUGE, La. — Three candidates for governor clashed over taxes and Medicaid in their first debate Thursday night but largely agreed on abortion restrictions, gun policies, the dangers of e-cigarettes and the value of the TOPS scholarship program.

One of the most contentious sequences centered on Louisiana’s shift from a budget deficit to a budget surplus since Edwards was elected in 2015 and whether the candidates would now cut taxes.

Edwards pointed to the state’s investment in education, including a recent pay raise for K-12 teachers and an end to the cuts in college budgets that were common under his predecessor, Republican Gov. Bobby Jindal. 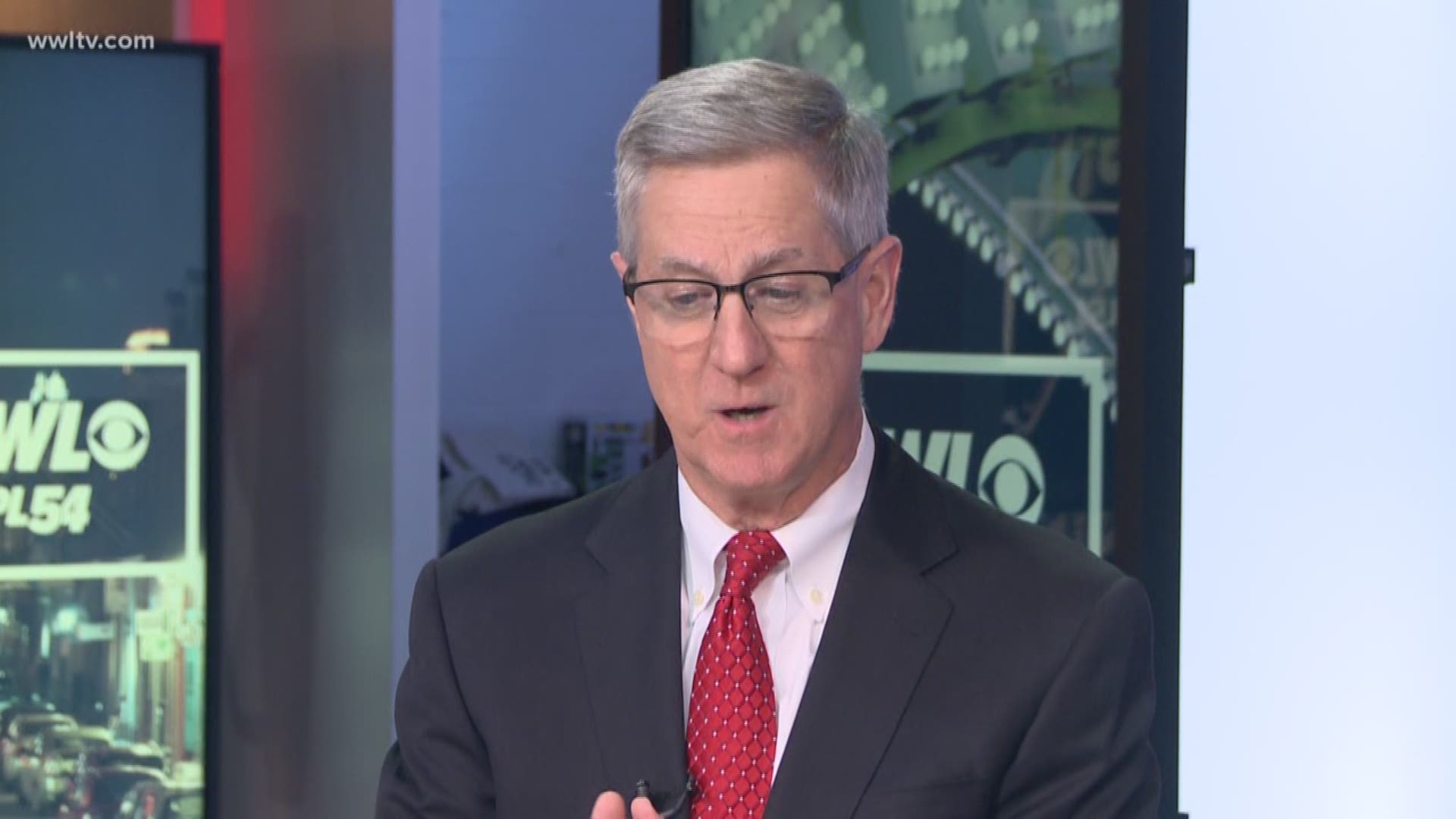 “What we don’t want to do is go back to cutting higher education,” Edwards said.

Candidates were then asked if they would support allowing local governments to decide whether to give tax breaks to corporations to create jobs.

Polls show that Edwards, the only Democratic governor in the Deep South, is leading the race, while Abraham and Rispone are competing to get in a runoff with him. Rispone recently attacked Abraham in television ads. But during the debate, both focused on their differences with Edwards rather than with one other.

Edwards has cited the addition of more than 450,000 working people to the state’s Medicaid health insurance rolls – a program mostly paid for by the federal government – as one of his biggest achievements.

Abraham maintained that the Medicaid expansion was “a nightmare” and vowed to tighten the program. Rispone contended the expansion is “unsustainable.”

Asked if he favored tying work requirements to Medicaid, Edwards said he supported community engagement for everyone on Medicaid.

Edwards then attacked Abraham for missing more votes in Congress than any other congressman at the same time that he was supporting stricter Medicaid job requirements. The banter between the candidates elicited cheers in the crowd.

The candidates were asked if they would support any exceptions to abortion restrictions. All three stated that they would not support exceptions in cases of rape or incest.

“I believe life begins at conception,” Abraham said. Edwards emphasized that he is a pro-life Catholic.

In response to a question about whether they would support a state law that to require background checks for all private sales of firearms, all three candidates essentially said no, citing their support for the Second Amendment.

Earlier in the evening, the candidates were asked if they would consider banning flavored e-cigarettes after recent national reports of more than 400 serious illnesses and seven vaping-related deaths.

Rispone said he was not prepared to sign an executive order banning the products. He said Louisiana should place warnings on the products.

Edwards said he would want to sit down with the Louisiana Department of Health before making a decision. He said he supported President Trump’s consideration of a ban on flavored e-cigarettes.

Abraham said that as a physician, he believes e-cigarettes are highly unhealthy for anyone to use.

LSU junior Sarah Procopio asked in a videotaped question for the candidates to raise their hands if they would support funding the TOPS scholarship program at its current level. All three raised their hands.

Edwards was asked about a former aide who had to resign over sexual-harassment allegations, and Rispone was asked how he could claim to be a political outsider after contributing nearly $1 million to political candidates since 1996.

Abraham has missed 44 percent of the votes in Congress since the start of his third term, the highest percentage of any sitting representative. He was asked why he did not step aside in Congress to focus on this race.

Abraham said he “represents our constituents every day” and is in constant contact with his staff on Capitol Hill, who are “solving problems every day of the week.”

In his closing statement, Edwards emphasized his reversal of Louisiana’s budget deficit to a surplus.

Rispone contended that Louisiana’s economy was the slowest in the country and said he knew how to create jobs.

Abraham said that if he were governor, a Louisiana with a strong economy would not be a dream, but a reality.

When given the opportunity for applause, the crowd erupted into cheers, with “Four more years!” being heard from Edwards supporters and “Go, Doc, Go!” heard from Abraham supporters.