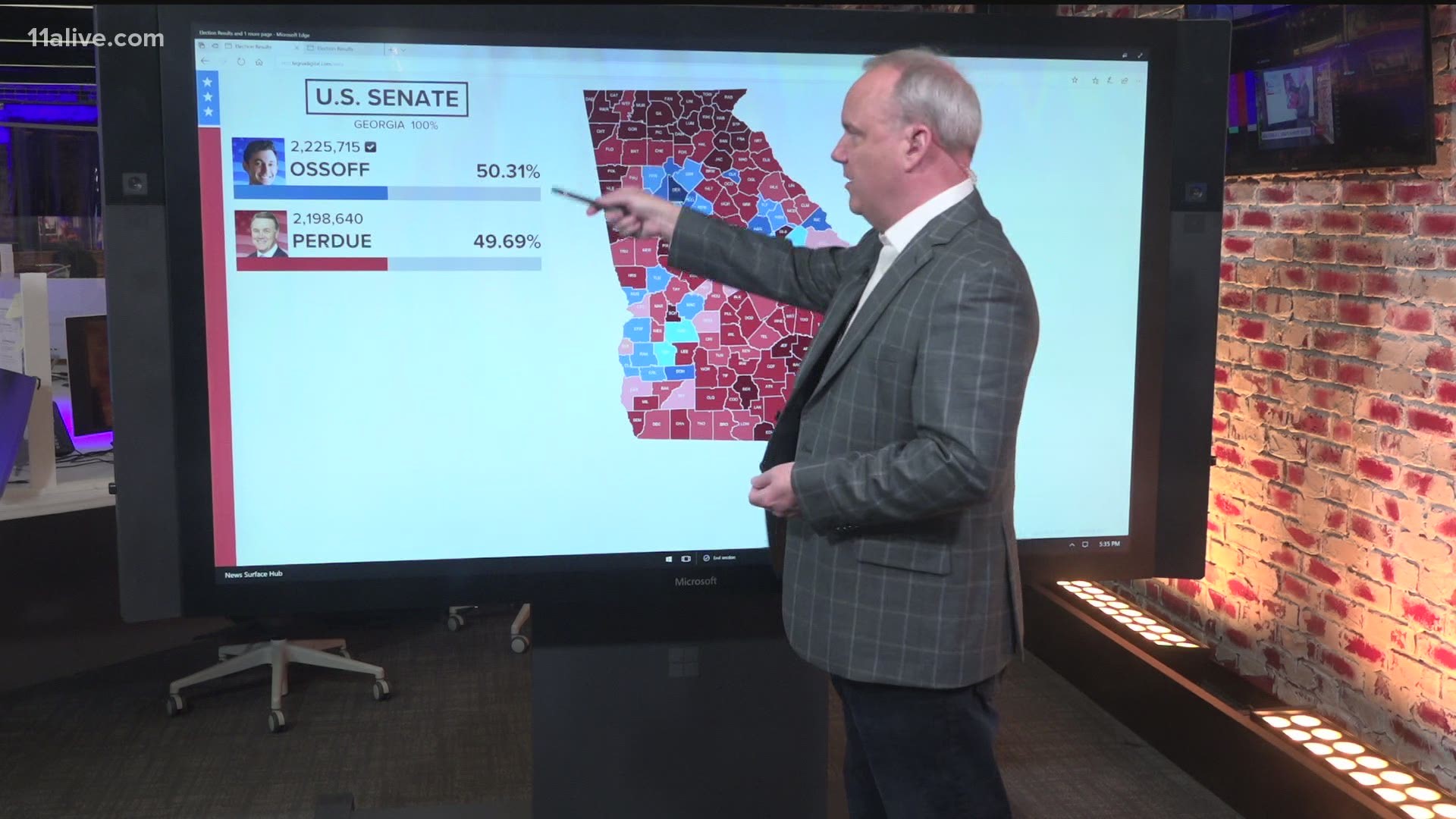 ATLANTA — The eyes of the world are on Georgia after voters took to the polls for two Senate runoff races today.

Republican David Perdue faces off against Democrat Jon Ossoff in one race, while Republican Kelly Loeffler takes on the Rev. Rafael Warnock in the runoff to fill the seat vacated by former Sen. Johnny Isakson.

In the map below, see a breakdown of Georgia's votes by county.

Bookmark this page and return for real-time Georgia runoff election results as they come in. Download the free 11Alive News app (Google Play | Apple devices) to receive alerts as the numbers come in. Send us any voting day issues or questions by text at (404) 885-7600.

Use the interactive tool below to see results by county. You can toggle between "Senate Special Runoff" and "General Election Runoff" to see results from each race.

When is the Georgia Senate Runoff Date?

The Georgia Senate runoff will be held on January 5, 2021.

When does ballot counting begin for the Georgia Senate runoffs?

The polls are set to close at 7 p.m. EST on Election Day, and that's when ballot counting can begin. Absentee ballots must be received by the close of polls to be counted. Military and overseas ballots postmarked by Tuesday and received by Friday will be counted, and absentee voters also have until Friday to fix any problems so their votes can be counted.

When will we know the Georgia Senate Runoff results?

Much like the November election, it's very possible Americans will go to bed Tuesday without knowing who won. All indicators point to the likelihood of very tight margins in both races.

Media organizations, including The Associated Press, often declare winners on election night based on the results that are in, voter surveys and other political data.

But in a close race, more of the vote may need to be counted before the AP can call a winner.

What's at stake in the Georgia Senate runoff races?

A lot. If the Republicans win just one seat, they will maintain control of the U.S. Senate. However, if the Democrats are able to win both seats, they will take over power of the Senate.

Who is Kelly Loeffler?

Loeffler is a graduate of the University of Illinois at Urbana-Champaign and earned an MBA from DePaul University.

Loeffler moved to Georgia in 2002 and worked as chief communications and marketing officer and head of investor relations at Intercontinental Exchange.

While at Intercontinental Exchange, Loeffler met her husband, the company's CEO Jeff Sprecher.

In 2010, Loeffler obtained interest in the WNBA's Atlanta Dream team.

Loeffler and her husband Sprecher are reportedly worth more than $500 million, making her the richest member of the Senate.

Who is Raphael Warnock?

Warnock grew up in Savannah, Georgia with 11 siblings.

Warnock graduated from Morehouse College in Atlanta with a degree in psychology in 1991 and went on to earn a Master of Divinity degree from Union Theological Seminary in New York City.

He became the senior pastor of Ebenezer Baptist Church in 2005.

Warnock has never held public office, and his run for U.S. Senate is his first campaign.

He has two children, a daughter, Chloé, and a son, Caleb.

Who is David Perdue?

David Perdue was elected as Georgia's junior senator in 2014.

Perdue was born in Macon, Georgia and grew up in Warner Robins. He earned a degree in industrial engineering and a master’s in operations research from Georgia Tech.

Perdue and his wife Bonnie have been married for 46 years, according to his bio. They have two sons and three grandsons.

Perdue has no connections to Perdue Chicken.

Who is Jon Ossoff?

Jon Ossoff was born in Atlanta.

Ossoff, who has never held public office, is described in his website bio as a "media executive, investigative journalist, and small business owner." Since 2013, he has served as CEO of Insight TWI, a media company that says it produces "fresh, daring factual content and high-impact journalism."

Ossoff's wife, Alisha, is an OB/GYN physician at a metro Atlanta hospital.

Ossoff first rose to political prominence when he ran a tight race against Karen Handel in Georgia's 6th Congressional District race to replace Republican Tom Price in 2017. Trump had selected Price to be Health and Human Service Secretary. The race between Ossoff and Handel quickly became one of the most expensive in the nation's history, with Handel besting Ossoff in a runoff election, 51.78 percent to 48.22 percent.