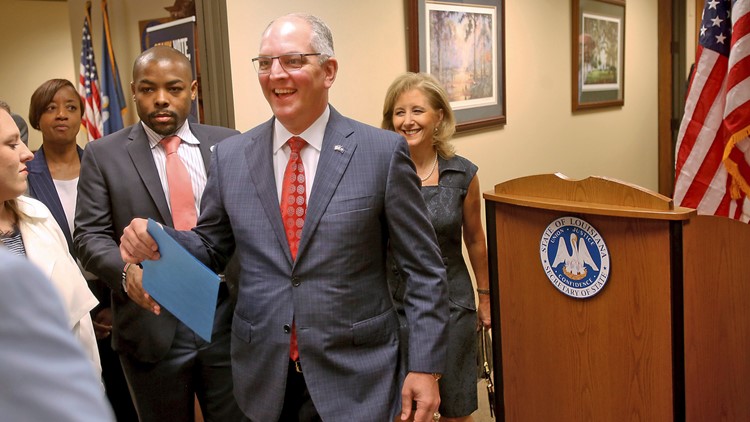 Photo by: AP
Louisiana Governor John Bel Edwards arrives at the Louisiana Secretary of State's office to sign up to run in the upcoming election, in Baton Rouge, La., Tuesday, August 6, 2019. The candidate sign-up period for Louisiana's statewide elections ends Thursday, with the governor's race at the top of the ballot. (AP Photo/Michael DeMocker)

Of the seven statewide elected officials seeking re-election on the Oct. 12 ballot, all drew opposition before the three-day candidate registration ended.

Edwards, the Deep South's only Democratic governor, faces the two major Republicans he expected: U.S. Rep. Ralph Abraham and businessman Eddie Rispone, as other high-profile GOP officials once wooed for the race refused to change their decisions to sit out the competition.

In a referendum on his performance since 2016, Edwards is campaigning on the state's recent budget stability after years of deficits and shortfalls under Republican former Gov. Bobby Jindal. Abraham and Rispone deride tax hikes backed by Edwards and the majority-Republican Legislature, and say the governor is stifling economic growth and development.

Rispone is focusing his campaign on his support of President Donald Trump and is largely self-funding his effort. Abraham has been drawing endorsements from local GOP officials around the state, but lags significantly in financing for his campaign.

Six other candidates with little to no fundraising also have jumped into the governor's race. Among them is Gary Landrieu, an independent from Metairie and cousin of Democratic former U.S. Sen. Mary Landrieu and ex-New Orleans Mayor Mitch Landrieu who has run unsuccessfully for several offices.

Ardoin, Schroder and Strain face rematches with opponents they defeated in their last elections.

Nungesser made it to the final day of the candidate signup period before someone joined the lieutenant governor's race — and that lack of opposition was the reason Rao Uppu registered.

Uppu, a Democrat and Southern University professor, said he heard on the radio that Nungesser didn't have a challenger. A naturalized U.S. citizen who emigrated from India, Uppu said he couldn't imagine someone winning a statewide office unopposed, so he went to the secretary of state's office to qualify.

Without challenged elections, Uppu said, "it's like democracy becomes extinct or non-existent."

"I thought that's just not right," he said.

Landry made it to the final hour of qualifying without opposition — but then Ike Jackson Jr., a Democrat and lawyer from Plaquemine, registered for the race. The Democratic Party said Jackson is a former lawyer for the natural resources department and a former assistant attorney general.

Outside of the governor's race, Donelon faces the best-financed opponent. The incumbent in office since 2006 drew intraparty competition from Tim Temple, who's worked in the insurance industry for 20 years and who has put more than $1 million of his own cash into the race.

All candidates run against each other on the same ballot regardless of party. If no candidate gets more than 50 percent of the vote in October, the top two vote-getters advance to the Nov. 16 runoff to settle the seat.