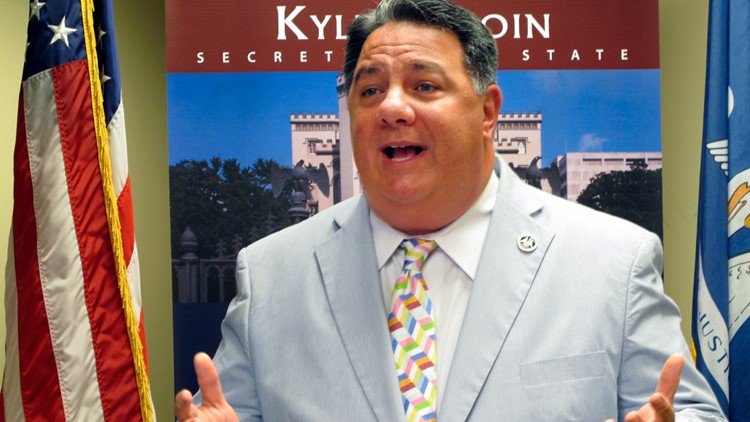 Photo by: AP
FILE- In this July 20, 2018 file photo, interim Secretary of State Kyle Ardoin, R-Baton Rouge, talks to reporters about his last-minute decision to run in the special election for secretary of state, in Baton Rouge, La. Ardoin told lawmakers Tuesday, April 2, 2019 ,that he’s hoping to restart the state’s efforts to replace thousands of voting machines this summer after his last procurement effort was derailed by allegations of improper handling. (AP Photo/Melinda Deslatte, File)

BATON ROUGE, La. (AP) — Louisiana's secretary of state told lawmakers Tuesday that he hopes to restart efforts to replace thousands of voting machines this summer, after the last effort was derailed by allegations of improper bid handling.

Ardoin told the House Appropriations Committee his office will rent early-voting machines for the October and November elections, when all of Louisiana's statewide and legislative positions are on the ballot. The office will use spare parts to make sure the decade-old Election Day voting machines are running properly.

"Because the last (bid process) didn't work out so well, we're working very hard to maneuver to make sure that we are settled for the fall election," Ardoin said.

Ardoin defended Dominion's selection and the bid process used to select the company and disagreed with the decision of Gov. John Bel Edwards' administration to void the contract deal. But the Colorado-based company didn't dispute the matter in court and instead said it would bid again when the vendor search is redone.

Ardoin, who is running for re-election this fall, told lawmakers Tuesday that his office has met with the Edwards administration and the procurement office to start putting together a new request for bids from companies interested in the voting machine contract.

He said his office has nearly $6 million in federal funds for the replacement work, along with $2 million in a voting technology fund. But he hasn't identified all the money that would be needed. Dominion previously estimated its work would cost up to $95 million.

With the state sitting on a $300 million surplus from last year, Ardoin asked lawmakers to consider setting aside a portion of that money for the voting machines.

"We've had some that we've taken out of use just because they've shown signs of error," Ardoin said.

The secretary of state's office started searching for a voting machine contractor in March 2018, soliciting bids to replace 10,000 Election Day and early-voting machines, bought in 2005, with smaller devices, improved technology and a paper record of votes.

Three companies bid for the contract. Dominion was chosen as the winner in August. But the decision was embroiled in accusations by losing bidder Election Systems and Software that the secretary of state's office attempted to manipulate the outcome.